Is curling 10 kg challenging enough to build your biceps? 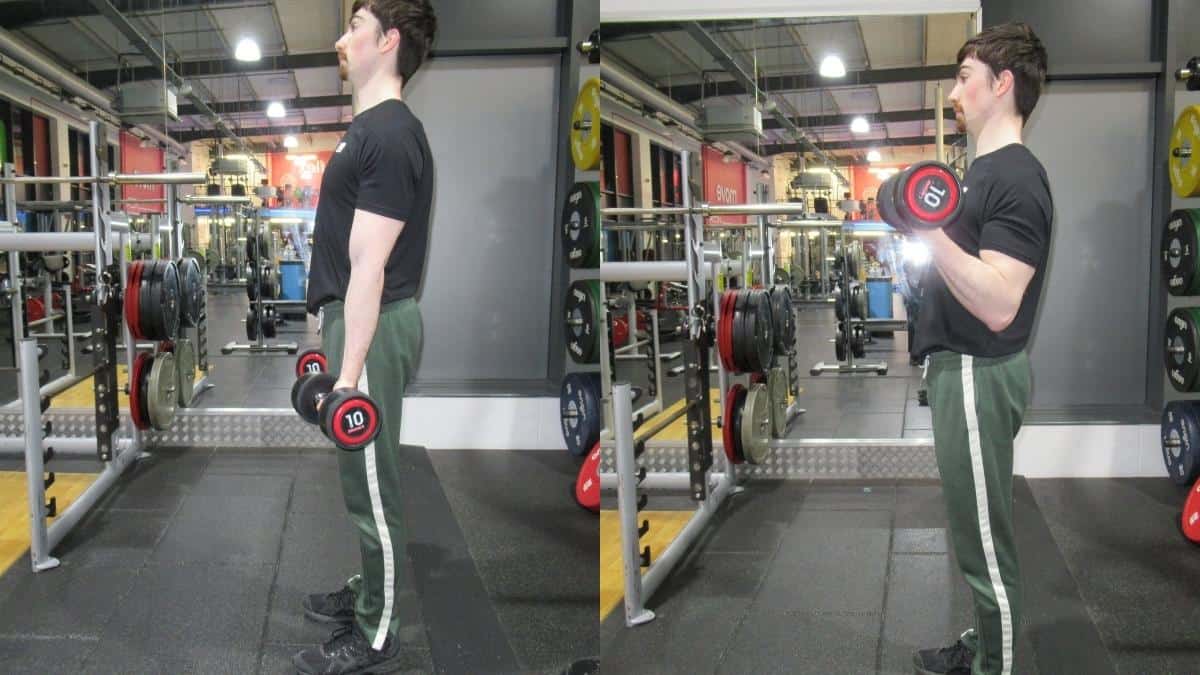 Is a 10 kg bicep curl good? Also, how much should I be able to curl?

This guide draws on years of training experience and real-life case studies to answer those questions and more.

We took common curl weights and assessed whether they presented enough challenge to build and strengthen the biceps brachii.

See How Strong Your Curl Is:

Yes, a 10 kg bicep curl is a good lift and is certainly challenging enough to build muscle. This is especially true if you’re lifting with good form and performing plenty of sets and reps.

While 10 kilograms might seem like a light amount of weight, it’s actually a lot of resistance for a relatively small muscle group such as the biceps. After all, your muscles are just simple pieces of meat. Your biceps can’t tell how much “weight” you’re curling because they only respond to tension.

So 10 kg bicep curls can actually lead to a lot more muscle hypertrophy than most people think. If you control the weight perfectly and really supinate your wrists to get an intense peak contraction, then you can see both quick and noticeable bicep gains by curling 10 kg.

Once you dip below 10 kg, the weights start to seem really light. I mean, seven is a small number, and most gym-goers can easily hold a pair of 7.5 kg dumbbells in their hands.

However, if you read the previous section, you’ll know that the biceps don’t require that much resistance to grow and develop—and they respond to tension, not weight (in fact, they don’t know what “weight” is).

Therefore, 7.5 kg bicep curls are actually more than challenging enough to build your biceps. This is especially the case if you’re performing high reps (15-30) for multiple sets (3-6).

Many a pair of sleeve-busting biceps have been built with much lighter weights than you’d imagine. More on that in a sec.

Is a 5 kg bicep curl enough to build muscle?

Is a 5 kg bicep curl really enough to build muscle?

Despite what you might think, 5 kg biceps curls are actually challenging enough to build muscle.

The bicep curl, after all, is an isolation exercise. So the more that you can physically isolate your biceps by taking your other muscles out of the equation, the better the results that you’ll get.

In this sense, it’s better—for both hypertrophy and injury prevention—to curl 5 kg for 20 slow and controlled reps than it is to swing the 10 kg weights around for a few sloppy reps.

Now we’re getting into the really heavy stuff.

Even though 15 kg curls are often seen as a moderately good lift, a 15 kg bicep curl is actually very impressive when it’s performed with strict, bicep-building form.

Of course, the more reps that you can perform and the more cleanly you can execute them, the more potent a growth stimulus you’ll elicit for your biceps.

Still, getting even 5 good reps with 15 kg in each hand is a great milestone to reach for a natural lifter.

While you certainly don’t ever need to bicep curl 15 kg dumbbells in order to get results, it’s certainly something to aim for if you want to keep gaining size and strength years into the future.

Learn the kind of form and training techniques that you can use to get the best results from 10 kg dumbbell curls.

Tom Guyler’s 10 kg curls are a great example of what good technique looks like.

Keeping your wrists supinated throughout the entire duration of the set keeps your biceps in a contracted position, which helps you to get a good pump.

The only real improvement that I’d make to his technique is that he could actively supinate even more at the top of each rep in order to intensify the peak contraction and really light up his biceps.

Still, if more people lifted with the same quality technique that Tom does, then there would be a lot more pairs of bulging biceps on the loose!

Stefan Haager posted a video of himself a while back doing 10 kg dumbbell curls.

Stefan is clearly a big guy, and so most people would naturally assume that he can lift a lot more than 10 kilograms (and he probably can).

However, when you truly isolate the biceps like Stefan did, you don’t need a lot of weight to make your biceps burn and reach the point of failure. This fella was grimacing at the pump toward the end of his set, which just goes to show how much his biceps were being activated.

Granted, Stefan was probably doing these curls at the end of his workout. But even so, your biceps will be in a similarly fatigued state after performing 1-2 sets of curls, so don’t think that 10 kilograms isn’t challenging enough when paired with strict technique.

Raees Patnaik shows that there’s more than one way to make gains from 10 kg dumbbell curls.

When working with relatively light weights (or even moderate weights), I like to curl both weights together to intensify the biceps pump.

However, if curling 10 kg in each hand is fairly heavy for you, then you can also do your curls in an alternating fashion. This way, each of your biceps will be getting a short rest while the other is working, which will allow you to perform more total reps.

Another good tactic for prolonging your sets and performing more training volume is to curl with both arms until you approach fatigue. Then, once your biceps are pumped, switch to the alternating approach so that you take longer to reach failure.

Despite what you may have heard, 10 kilogram bicep curls are indeed challenging enough to build muscle mass—and plenty of it.

You have to remember that the biceps are a relatively small muscle group, which, due to their size, can’t handle that much resistance by themselves. Sure, you can swing heavier weights up with the help of your back, legs, hips, and shoulders, but then it wouldn’t really be a curl, would it?

If biceps hypertrophy (more so than merely curling heavy weights) is your main goal, then 10 kg dumbbell curls present enough challenging to at least 80% of the lifting population (some bodybuilders are just too strong for 10 kg dumbbells).

Even if your biceps are already well-developed, you can always do sets of 20-30 reps with 10 kg (or even less weight) so that your biceps can reach muscular failure and get a potent hypertrophic stimulus.