Is it possible to perform a 100 kg bicep curl with a barbell? How about with a dumbbell?

Discover the elite group of lifters who managed to perform a 100 kg bicep curl. 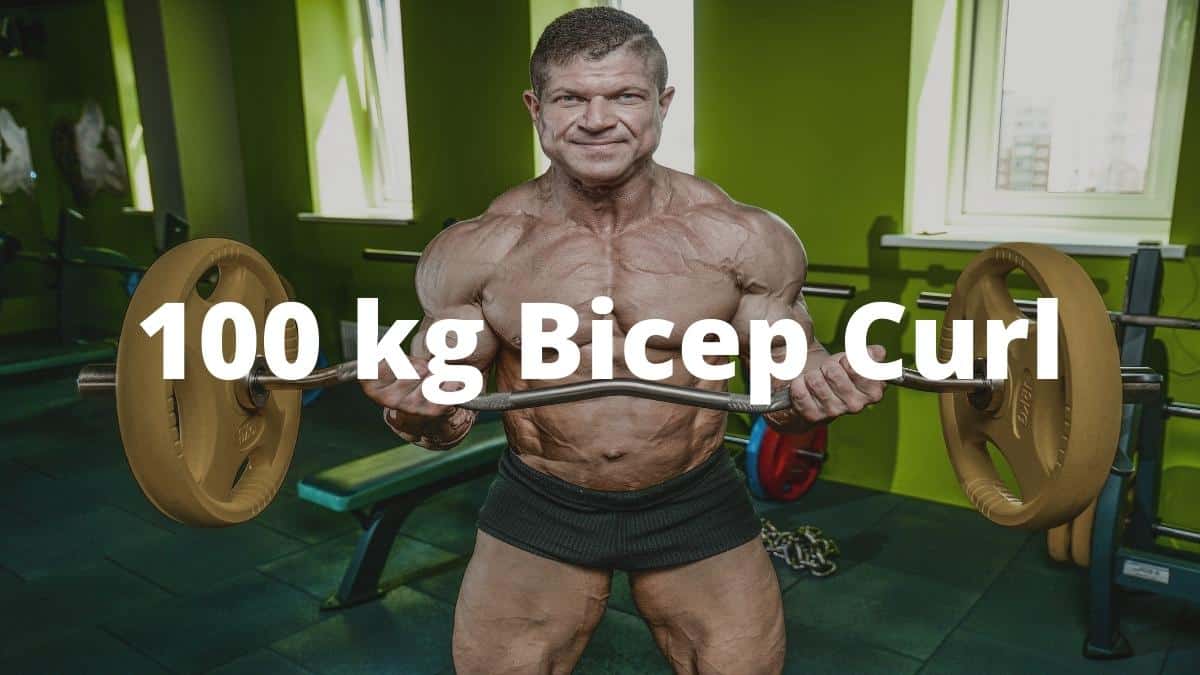 Even a cursory reading of the bicep curl standards will tell you that a 100 kg bicep curl is an elite-level lift that 99% of people will never accomplish.

Yet, as you’ll soon learn, there are a few gifted individuals who’ve managed to bicep curl 100 kg with surprisingly good technique. So let’s see what kind of size and training experience is required to perform a 100 kg barbell curl.

See How Your Curl Compares:

Table of Contents show
Is performing a 100 kg bicep curl realistic?
Who can perform a 100 kg dumbbell curl?
Who can bicep curl 100 kg?
Naturalpower4life
Aurelien Le Jeune
ThommyGodlover
Juro Grigel
Conclusion: What does it take to achieve a 100 kg curl?

For the vast majority of lifters, no, performing a 100 kg bicep curl isn’t realistic. This is because most people’s biceps simply don’t have the size and strength to handle 100 kg, even with assistance from surrounding muscle groups.

Additionally, if the average lifter was to attempt a 100 kg barbell curl, then they’d risk tearing a bicep or hurting their back, which is hardly worth being admitted into the 100 kg curl club.

But for the typical lifter, a 100 kg curl of any kind is beyond reach.

Who can perform a 100 kg dumbbell curl?

When you consider the fact that curling 100 kg with both hands is already extremely impressive, you’d think that a 100 kg curl is a complete and utter impossibility.

However, if your name is Levan Saginashvili (aka The Georgian Hulk), then a 100 kg dumbbell curl might just be possible for you.

To put things into perspective, Saginashvili is a professional arm wrestler who weighs over 350 lbs.

He also doesn’t curl like a bodybuilder (at least not most of the time) because he trains for arm wrestling strength rather than physique. This means that he doesn’t do what many gym bros would consider “full rep.”

Yet, from an arm wrestling perspective, Saginashvili’s technique is flawless because it’s highly specific to his sport.

Learn the kind of physique and strength that you need to achieve a 100 kg bicep curl.

The man behind the YouTube channel naturalpower4life posted a video of what must be one of the strictest 100 kg curls ever performed by a natural lifter.

Using minimal momentum, this man curled 100 kg through a full range of motion, which is an awe-inspiring feat of bicep strength.

While there are videos of other lifters curling 100 kg for more reps, their form is nowhere near as strict as this guy’s technique.

Obviously, the more sloppy your form gets, the less your curl looks like a curl. So even though he only did one rep, naturalpower4life put up the best 100 kg barbell curl attempt, in my opinion.

Aurelien Le Jeune is a French strongman who curled 100 kg for 11 reps.

His technique was perhaps not as strict as the example that we saw above, but it was certainly as good (and probably better than) as the average curling technique that you see in the gym.

Additionally, since Aurelien isn’t a bodybuilder, there’s no need for him to perform slow and controlled reps.

Curling 100 kg for 11 reps is amazing regardless of how you get the weight up, and this guy certainly made his biceps do most of the heavy lifting.

We’ve featured Thommy a number of times in our curl strength articles because his bicep power is just incredible.

While he used some momentum, that’s to be expected when you’re truly maxing out. And besides, his biceps still did most of the work.

Thommy also used an Olympic barbell rather than an EZ bar, which, in my opinion, makes the curl a bit harder.

Although his form wasn’t particularly strict, he still got a good range of motion for his biceps.

He also performed his reps in a pumping fashion, which means that his biceps didn’t get any rest in between reps.

Juro also shows that using a bit of momentum is a good way to overload your biceps with more resistance.

The eccentric part of the rep, after all, is extremely important for hypertrophy. [2] So if you can safely challenge your biceps with heavier poundages during the negative part of the repetition, then you’re doing your biceps a big favor.

Conclusion: What does it take to achieve a 100 kg curl?

First and foremost, to perform a 100 kg bicep curl, you need years and likely at least a decade of training experience under your belt. And by training experience, I don’t just mean showing up to gym. I’m talking about hard, heavy, progressive training designed to elicit maximum strength development.

Moreover, you’ll likely also need to use some momentum if you want to perform a 100 kg barbell curl for even one full rep.

This use of momentum means that your injury risk will increase, so if you want to stay in the game long-term, then it might be worth aiming a bit lower and sticking to high reps so that you can spare your joints and tendons.