Is bicep curling 200 lbs with dumbbells or a barbell possible?

Learn what it takes for a natural lifter to perform a 200 pound bicep curl. 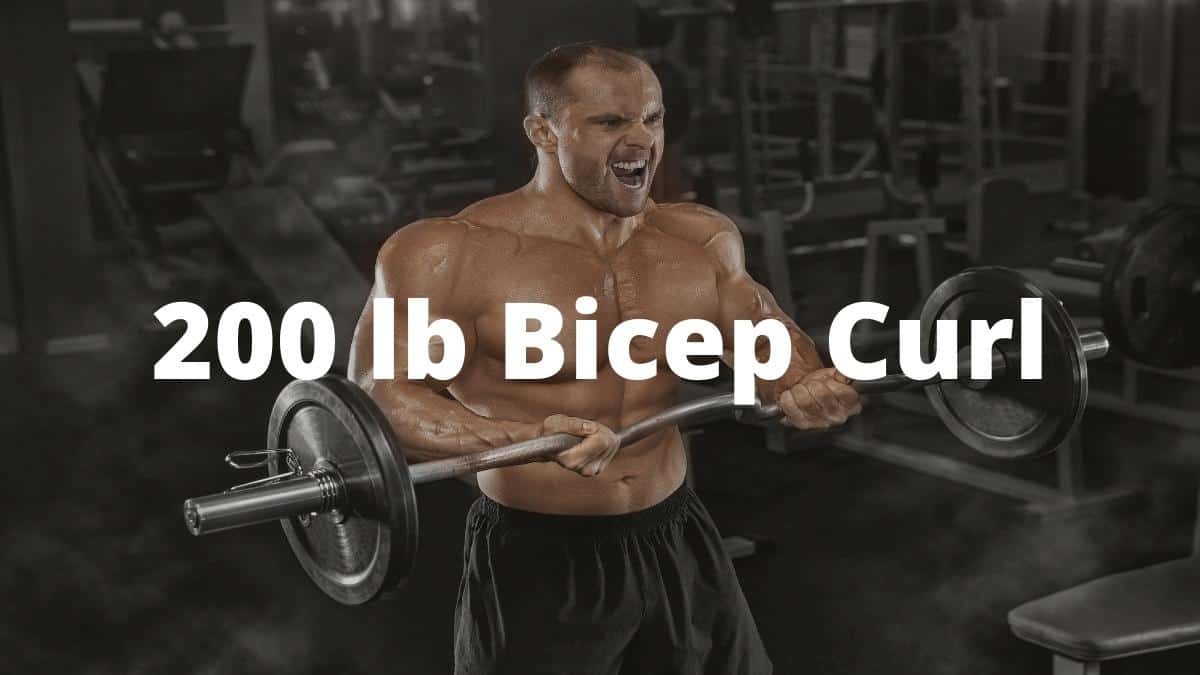 How much should you curl? Is curling 200 lbs possible for natural lifters?

This guide, which makes use of a series of real-world case studies, answers both of these questions and more.

Your biceps brachii muscles have much greater strength potential than you'd think. While it's rare, there are multiple examples of people performing 180 lb curls, 200 lb curls, and even 225 lb curls.

Is curling 200 lbs with good form a realistic possibility for a natural lifter?

For most natural weight lifters, no, a 200 pound bicep curl is far beyond what they can expect to lift with good technique.

However, as you'll soon see, a strict 200 lb curl is technically possible for lifters with above-average bicep strength, a big frame, and a high body weight.

But for the average gym-goer, a 200 lb barbell curl is completely unattainable because it's more weight than most people can bench press.

Learn what it takes to perform 200 pound curls with a barbell and even with dumbbells.

Michael Phaup is one of the strongest strict curlers in the world. He managed to make a 200 pound curl look easy, which is especially impressive considering that it's pretty close to his body weight.

Michael's YouTube channel contains numerous videos of him curling impressive weights over the course of many years.

It just goes to show that while a 200 lb bicep curl is possible, it can take years and even decades of consistent workouts to achieve for a hard-working natural lifter.

All of this, of course, was done with extreme strictness. Just imagine how much he could've curled if he'd used even a moderate amount of momentum.

The Swede behind the YouTube channel ThommyGodlover is known for posting videos of his incredible feats of strength, all while being older than 50!

Considering that most gym-goers can't even bench press 200 lbs for 8 reps, Thommy is one of the strongest curlers in the world.

Of course, he used a bit of momentum to curl the weight up, but his biceps were still doing the vast majority of the work.

The only time that momentum becomes bad is when it makes the exercise unrecognizable, which certainly wasn't the case with Thommy's record-breaking 200 pound curl set.

Now, in order to lift that amount of weight, Kali obviously had to swing the dumbbells a bit.

Nevertheless, most people can't even pick 200 lb dumbbells off the floor and hold them in their hands. So for a man to curl 200 lb dumbbells with his biceps is a truly groundbreaking achievement.

I'm as relieved as you are that he didn't tear a bicep.

Learn what kind of strength is required to hit common curl milestones; everyone who curls 200 lbs had to curl 180 lbs and 190 lbs before!

Curling 180 pounds is a fantastic feat of strength because it's about the same amount of weight that a relatively strong recreational weight lifter can bench press.

And if you ever needed a reason to believe that curling power is mainly derived from biceps size (bigger muscles are usually stronger muscles [1]), then you should look no further than Mark Ranaletti.

Ranaletti is a powerlifter who has monstrous arms, which just goes to show that strength and size are far from being mutually exclusive.

His 180 lb curl was performed strictly with his back against a stable surface, which is incredible when you consider the fact that most people can't even swing that much weight up with their entire body.

Tim Covert has a number of videos showing his impressive curling strength, and this short 185 lb curl clip is no exception.

Additionally, his body English was very controlled; he still used his biceps to lift the weight and got a full range of motion on every rep.

I don't think that Tim is a competitive bodybuilder or powerlifter either. So considering that he is, in all likelihood, a recreational lifter, his achievement is even more impressive.

For this example (and for the next one), we're using Michael Phaup again because he's an excellent case study of how you can realistically curl in excess of 190 lbs and 200 lbs.

He says in one of the comments that curling every day—multiple times per day—is a viable strategy for increasing your curl strength.

Whether or not this strategy is the best way to gain size remains unclear (and I doubt that it is). [2] But just remember that maximum bicep hypertrophy and maximum curling power are two different goals.

If you want to curl 190 lbs or 200 lbs, then you need to get your reps in so that curling feels as simple as brushing your teeth. More on this in a sec.

Curling 195 lbs is a feat of strength that you don't see every day—even on the internet.

As I mentioned above, if you want to curl 200 pounds or anywhere near it, then you need curling to feel like the most natural activity in the world.

One of the best ways to make the bicep curl a priority, according to curling and weight lifting phenomenon Michael Phaup is to have some weights at home so that you can curl multiple times per day.

He recommends doing a set to (or close to) failure every few hours.

With a muscle-building diet and enough consistency, [3] this unique approach to training will surely lead to sizeable bicep growth (unless you already have good biceps) and a significant improvement in curl strength.

Just note, however, that if you're going to adopt this high-frequency strategy, that's it's probably best to take some time off (at least a week) before you attempt a new curling PR.

A 200 lb barbell curl is already an incredible feat of strength that puts you in the top 1% of curlers.

But did you know that there are people out there who can curl even more than 200 pounds?

Most lifters are stoked when they hit a 225 lb bench press. So just imagine how strong you have to be to curl 225 lbs!

Rich Piana was one of those lifters who had both the bicep size and the bicep strength.

Boasting some of the biggest muscles on the planet, Piana could also curl 225 pounds for around 8 reps.

Although he used some momentum (wouldn't anyone if they were curling 225 lbs?), he also got a full range of motion on every rep like any good bodybuilder.

Piana even did some dumbbells curls right after curling 225 lbs, which just goes to show that his training intensity was second to none.

You pretty much have to scour the internet to find footage of anyone curling 245 pounds (you certainly won't see it in the gym), but we managed to do it.

Jason is a bodybuilder who was featured on the STRENGTHNET YouTube channel. In the incredible video, he curled 245 lbs for 4 reps, which is an unheard-of feat of bicep strength.

All of this is while being shredded, so just imagine how much he could curl if he bulked up to a higher body fat level!

Walker used a neutral grip for these curls, which obviously makes the lift easier than using a supinated grip.

However, he also used an extensive range of motion and only minimal momentum, which is extremely impressive considering that 260 lbs is way in excess of most people's bench press max.

Curling 260 lbs obviously requires having a high body weight and a larger than average frame. For this reason, you shouldn't feel disheartened if your curl is way off this weight. The reality is that most lifters simply don't have the genetics to curl 200 lbs, never mind 260 lbs.

To merely lift 275 lbs is an impressive achievement. But to curl 275 lbs? That's something truly incredible.

Kali is well-known for his incredible feats of curling strength, and this display of raw bicep power is no exception.

Not everyone believes that the weights that he was lifting were real, but looking at the size of his arms, I don't doubt that he could legitimately curl 275 lbs.

After all, he might weigh more than 275 lbs, which would mean that he's simply curling his body weight (which, as you saw above, is possible for natural lifters).

Conclusion: How realistic is curling 200 lbs?

200 pound dumbbell curls are completely out of the question for virtually everyone on the planet except professional bodybuilders and strongmen.

Curling 200 lbs with a barbell, however, is much more realistic.

Of course, not everyone has the genetics to perform a 200 lb curl for even one rep. This is especially true for those with a smaller frame or those who perform better at feats of endurance rather than feats of raw strength.

Still, with enough training experience (I'd say at least 5-10 years) and the discipline to curl consistently, a minority of natural lifters would likely be able to perform a 200 pound bicep curl for 1-2 reps.