Is bicep curling 300 lbs and 400 lbs possible for anyone?

Learn the kind of strength that it takes to perform a 300 lb curl for reps. 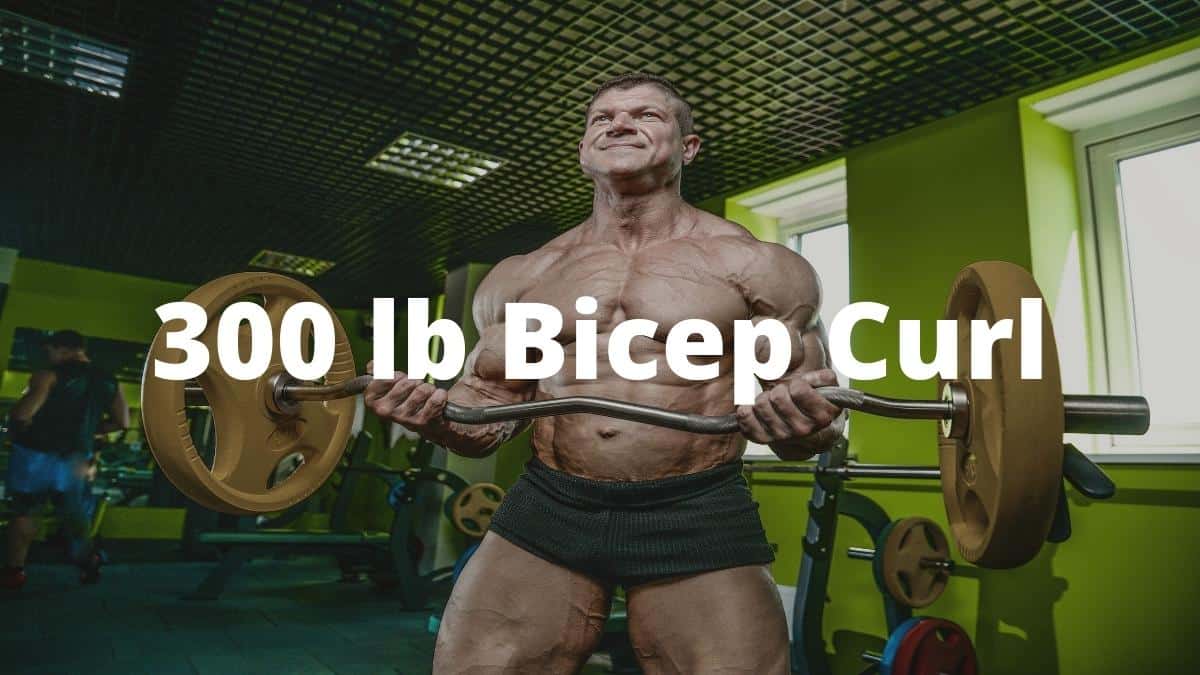 Is 300 lbs a realistic bicep curl max for a weight lifter with good genetics for strength?

Although the biceps muscles have a lot more strength potential than most people realize, a 300 lb curl is completely unrealistic for 99.9% of lifters.

The following examples show people who’ve attempted 300 pound bicep curls so that you can see just how heavy 300 lbs is for some of the strongest men on the planet.

Is curling 300 lbs possible or not?

Curling 300 lbs is utterly impossible for the vast majority of lifters because the biceps, which are a relatively small muscle group, simply aren’t capable of lifting that much resistance by themselves.

Now, if you’re a bodybuilder and are prepared to risk a bicep injury by swinging the barbell up, then perhaps you can legitimately curl 300 pounds for a rep or two. But why would you want to risk a bicep tear when you can build monstrous biceps with far less resistance?

Additionally—momentum or not—you’d need to be a pretty big guy to even budge 300 lbs with your biceps.

Consider the fact that 300 lbs is an excellent bench press, and you begin to realize that only elite strongmen and bodybuilders could even cheat curl 300 lbs.

We talk a lot about various curling feats of strength. So, naturally, people wonder about the limits of human biceps strength.

Curling 400 lbs, however, is completely impossible for anyone.

The biceps, as mentioned, simply don’t have the force output potential to move that kind of weight without significant help from the rest of your body (then it wouldn’t really be a curl).

Could you find a huge strongman competitor that could lift 400 lbs in a way that vaguely resembles a bicep curl?

Probably. But they’d be putting their strongman career on the line by risking a bicep injury.

Here are some examples of people doing 300 pound curls with various kinds of form and for different amounts of reps.

Cheick Sanou (Iron Biby) is a strongman competitor from Burkina Faso who holds a number of weight lifting records.

There’s also a video of him curling 300 lbs, which was posted back in 2014. It’s likely that he’s even stronger now and could probably curl 300 pounds with much better form.

However, considering that it was likely a max effort attempt for Iron Biby at the time, his form was actually fairly good.

Yes, he leaned back quite a bit, but the weight went up pretty easily as well.

When you’re a strongman competitor, you don’t always need to use the strictest form because you need to get your body used to lifting massive amounts of weight in awkward positions.

It’s impossible to talk about biceps strength without talking about Kali Muscle.

Kali posted a video of his incredible 315 pound curl set in which he curled 315 lbs over 10 times.

Of course, in addition to performing partial reps, he made liberal use of momentum to swing the weights up. But that doesn’t take anything away from the fact that Kali curled more weight than pretty much any other human (certainly any other YouTuber).

Considering that many people can’t lift 315 lbs off the floor, the fact that Kali could even budge 315 lbs with his biceps tells you that this man has incredible strength in addition to a massively muscular physique. Incredible stuff.

Magnus Samuelsson has some of the strongest arms in strength training history.

He curled 308 lbs for 4 clean reps. Out of all the examples in this article, Magnus’s form is by far the best.

Just look how slowly he lowers the weight. He controls every part of the eccentric while getting a full range of motion in the process. That’s how you shut up the form police.

In my opinion, this clip of Magnus is one of if not the most impressive feats of curling strength ever recorded. Yes, there are examples of people lifting just as heavy, but not with the same quality, bicep-dominant technique.

Eric Bugenhagen is a wrestler who has performed many impressive feats of strength in his time.

One of these feats of strength is an incredible 300 lb power curl for reps.

Because he’s essentially deadlifting the bar before every curl, Eric is expending much more energy than the other athletes that you saw above.

Of course, resetting the bar after every rep also gives his biceps time to rest. However, this style of curling is clearly way more cardio-intensive than regular standing curls, so it’s probably more challenging overall.

Either way, curling 300 lbs with any kind of technique that actually resembles a bicep curl is something that 99% of lifters can’t do. Plus, his range of motion was pretty good during the first half of his set.

Jaisyn Mike, an accomplished powerlifter, operates the YouTube channel MR.ATHLETIC OVER EVERYTHING, where he posts videos of, among other things, his incredible weight lifting records.

In one of these videos, Jaisyn Mike curls 315 lbs for 5 reps.

Considering that most serious lifters can’t bench press that much weight, it’s clear that this man is one of the strongest curlers out there.

Of course, his form might not be textbook, but he’s curling more weight than 99.9% of people can curl. And anyway, his biceps were still doing a lot of work despite him using some momentum to lift the barbell.

Curling 300 pounds is one of the toughest things that you can attempt in the gym.

It’s virtually impossible to curl 300 lbs or 315 lbs without using some momentum.

Magnus Samuelsson’s technique was the strictest, and even he used some slight momentum during the concentric phase of his reps.

These examples just go to show that the strength of the biceps is far greater than most people imagine.

While novice lifters should avoid using body English so that they can learn the correct technique, there’s nothing wrong with veteran strongmen and bodybuilders using some momentum when they test their strength.