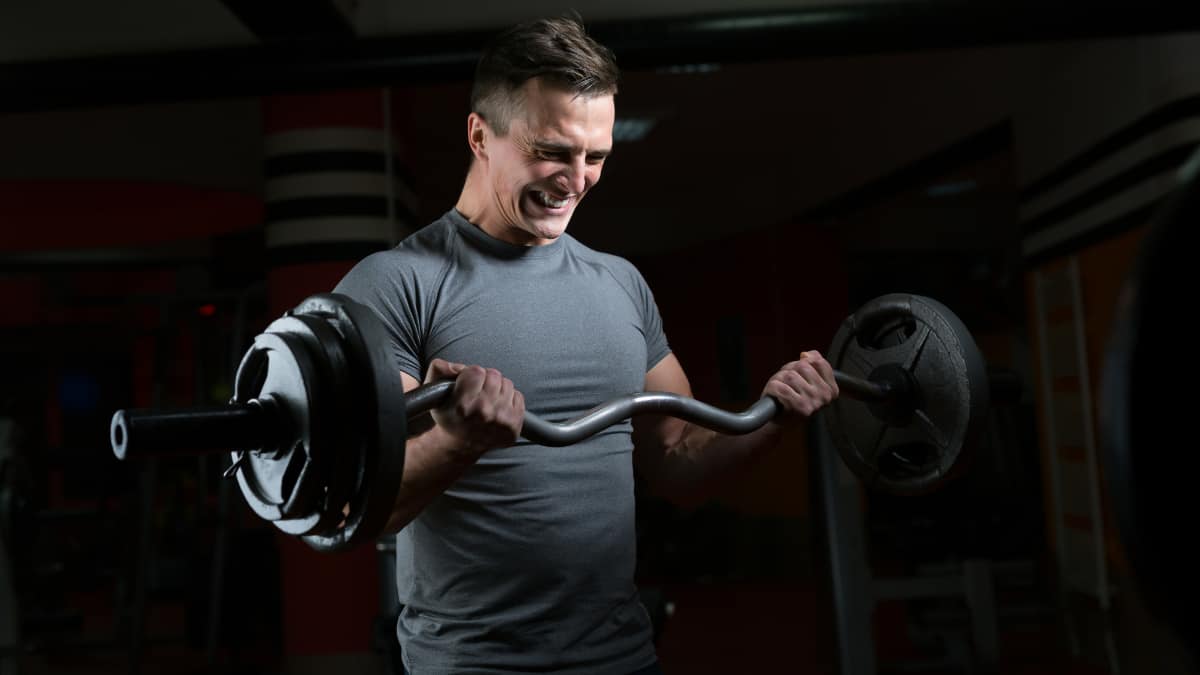 A 100 lb curl—whether that's performed with dumbbells or a barbell—is well above the average curl weight.

But just how impressive is curling 100 pounds for reps? And how long does it take to curl 100 lbs as a natural lifter?

We set out to answer those questions and more by drawing on a series of real-life case studies that show lifters of different weights, heights, and builds curling 100 lbs and more.

If a 100 pound curl seems unrealistic, then you're about to learn that the biceps muscles have much more strength potential than most people realize.

See How Strong Your Bicep Curl Is:

Is curling 100 pound dumbbells realistic for a natural lifter?

Yes, a 100 pound dumbbell curl is possible for natural lifters with good genetics if they train consistently for a number of years. Now, is a 100 lbs dumbbell curl realistic for every gym-goer?

No. But there are ways that you can make the feat of strength more attainable.

100 pound hammer curls, for example, are easier than 100 pound bicep curls because when you curl with a neutral/hammer grip, your biceps have more help from your brachialis and brachioradialis, which are two very powerful elbow flexors. [1]

Are you strong if you can preacher curl 100 pounds?

Preacher curls are harder than regular dumbbell curls because when your arm is braced against the preacher pad, you can't cheat the weight up with your shoulders, back, or legs.

The man behind the YouTube channel Hungry Hippo actually posted a video of himself doing 100 pound preacher curls with a dumbbell for 5 clean reps. Although he didn't lock his elbows out at the end of every rep, his repetitions were far from being half reps.

To put this incredible feat of bicep strength into perspective, this man is preacher curling more weight than 90% of gym-goers can bench press. It must be some kind of record.

All this talk of curling 100 pound dumbbells might make you feel weak if you can "only" curl 100 lbs with a barbell.

The truth is that a strict 100 lb barbell curl is actually a very impressive lift, especially if you can do more than 5 reps (more than 10 reps is amazing).

The biceps, after all, are a relatively small muscle group, so curling 100 lbs with a barbell is a major milestone for any natural lifter to reach.

Learn the kind of muscularity, form, and training intensity that it takes to reach all of the common 100 pound curl milestones. If you want to see what's required to achieve a 100 lb dumbbell curl, then check out the section after this one.

Jared Marx posted a video of himself back in 2011 performing a 105 pound bicep curl for 10 clean reps.

This example is eye-opening because it shows that while you definitely need a fair amount of bicep size to curl 105 lbs, you don't need to look like a professional bodybuilder.

Jared was clearly pumped up for his set, which can go a long way to increasing your strength (self-belief is very powerful when it comes to setting new PRs).

Additionally, Jared used an EZ bar rather than an Olympic bar, which puts less pressure on your wrists and likely enables you to overload your elbow flexors with more resistance.

Why do I say elbow flexors and not biceps? Because when you use an EZ bar, your hands are automatically in a semi-supinated position. Compared to a fully supinated grip, the semi-supinated hand position works more of your brachialis and brachioradialis muscles in addition to your biceps. In this regard, a pronated grip is even more effective for targeting the brachioradialis. [2]

If you want to know what good curling technique looks like, watch Robin Lehnerd's video of him curling 100 lbs for 4 reps.

Unlike other lifters, Robin curled with the fullest possible range of motion. He extended his elbows all the way at the end of every rep so that his biceps could get a proper stretch. And obviously, he curled the barbell all the way to his chest. In other words, Robin used textbook form on every single rep.

I'll bet that he could've done at least twice as many reps with loose form. But why use sloppy technique when the bicep curl is obviously an isolation exercise?

Sure, highly experienced bodybuilders can get away with using some momentum because they have a better mind-muscle connection than 99% of gym-goers. But for the average lifter, it's much better to use strict form so that you don't take tension off the target muscles.

The man who operates the YouTube channel SpartanStrength posted a video of himself curling 115 pounds for 6 full range of motion reps.

This is more weight than 80% of gym-goers can even budge with their biceps. So the fact that this guy performed 6 clean, bicep-focused reps is even more impressive. His form is another example of textbook curling technique.

Unlike the two previous examples, however, this fella used an Olympic bar for his 115 lbs curls, which placed an even greater demand on his biceps due to the fully supinated wrist position.

If he'd have used an EZ bar, then we'd probably have been watching him do 120 lb bicep curls instead. As mentioned, this is because EZ bars put your wrists in a semi-supinated position in which your brachialis and brachioradialis can produce more force.

Sifu Freddie Lee operates the channel Freddie's Modern Kung Fu and posted a video of himself back in 2013 displaying an awe-inspiring feat of strength: curling 120 lbs for 10 reps.

Considering that Sifu Freddie Lee only weighed 145 lbs in that video, his 120 lb bicep curl is truly exceptional. There are many lifters who weigh 40 lbs more than him who couldn't even do one half rep curl with 120 lbs!

Sure, his form wasn't perfect at the end of the set. But who's technique is textbook when they're training to absolute failure?

His initial reps were very clean, and he could've stopped there. But he decided to overload his biceps with even more growth-stimulating tension by fighting for an extra 2-3 hard-earned reps.

In the fitness industry (especially online), you often hear people claiming to have curled weights that seem far too heavy for them.

This next example shows you exactly what I mean.

Nate Knierim is a natural bodybuilder with truly phenomenal arm development. And yet, even someone of his size could only manage 3 reps with a 125 lb barbell curl.

Granted, he'd already done some lighter sets before, and his biceps were probably fatigued. However, it just goes to show that many of the feats of strength that you hear about when there's no video evidence are very likely too good to be true.

As such, if you can curl anywhere near 125 lbs, then you can consider yourself seriously strong. A 125 lb bicep curl can take years to build up to, so don't feel bad if you're not there yet because most people can't even budge 125 lbs for a cheating one-rep max!

The man behind the YouTube channel Shades 644 posted an excellent video of his one-rep max 130 lb barbell curl. It's a great example of what a textbook 1RM attempt looks like.

Curling 130 lbs is incredibly impressive for a natural lifter (which this guy is), and he did it without leaning back or swinging the bar up. He could've probably got 2 or 3 reps if he'd really pushed himself. But sometimes, when you're training frequently, it's good to leave a bit in the tank so that you can recover from your workouts and grow. [3]

These 100 lb dumbbell curl case studies show you the kind of physique and strength development that it takes to curl more weight in each hand than most people can bench press.

John Birmingham notes that most people will be able to do 100 lb hammer curls much more easily than they can do 100 lb dumbbell curls with a supinated grip.

As mentioned, this is because your brachialis and brachioradialis can produce more force when you curl with a neutral/hammer grip.

While John's technique wasn't perfect, he managed to perform 10 reps per arm. This is impressive considering that the average weight lifting enthusiast can't even bench press that much weight in each hand—never mind curl it!

Of course, he'd probably get a better workout by dropping the weight by 20 lbs or so, but sometimes it can be beneficial to use a bit of momentum if it allows you to overload your biceps with more tension during the eccentric phase of the rep.

IFBB Pro bodybuilder Steve Kuclo is a mass monster. There's a video of him curling 100 pound dumbbells for 11 reps with decent form, which is a lot of weight for even a professional bodybuilder to lift.

Bear in mind that this video was likely taken after he'd already done numerous sets for his biceps. When every session counts, you don't just walk into the gym and start doing 100 lb dumbbell curls before your back session because that would make you weaker on your pulldowns and rows.

So even though Steve's form wasn't 100% textbook (I think it was still pretty good), his biceps speak for themselves. His lifting technique wasn't one that would cause injuries, and he was only using a slight bit of momentum to get the weights moving.

Again, all of this is done while using a supinated grip for his 100 pound dumbbell curls. Using a palms-up grip makes the movement much harder because your biceps don't have as much assistance from your brachioradialis and brachialis.

Kevin Levrone is one of the biggest and most aesthetic bodybuilders to ever compete. But it wasn't only on stage where Levrone's dedication to bodybuilding was apparent.

Kevin Levrone could perform a 100 pound dumbbell curl for reps with good form. Sure, he used a slight bit of body English (most likely for balance because he was curling in an alternating fashion), but he also achieved full supination on every rep to make sure that his biceps were maximally contracted.

You're unlikely to see many bodybuilders curl 100 lb dumbbells with better form than Levrone's because many pros today use more machines and cables than free weights.

Levrone competed at a time when bodybuilders would test and display their strength on camera to prove that they didn't just have big muscles. Hopefully, people are inspired after watching his video, and we can see some other examples of competitive bodybuilders curling 100 lbs in each hand for reps.

Curling 100 pounds with dumbbells is unrealistic for most natural lifters because it requires a) a high body mass with plenty of muscle and b) the use of momentum to lift the weights.

Most gym-goers simply don't have the genetics or desire to bulk up to 200 lbs or more in order to be able to accomplish feats of strength like a 100 lb dumbbell curl.

The good news is that a 100 pound dumbbell curl is an arbitrary goal. People just want to lift that much weight because 100 lbs seems like a nice round number.

The reality is that you can lift much less weight than 100 lbs and still achieve fantastic bicep development.

A 100 lb barbell curl is a much more realistic lift that most gym-goers will be able to accomplish if they train long enough. While it might not happen within your first few years of training, curling 100 lbs with a barbell is possible if you prioritize your biceps and perform low reps to get them used to lifting heavy weights.