Provoke new bicep growth in just half an hour with this intense 30-minute workout. 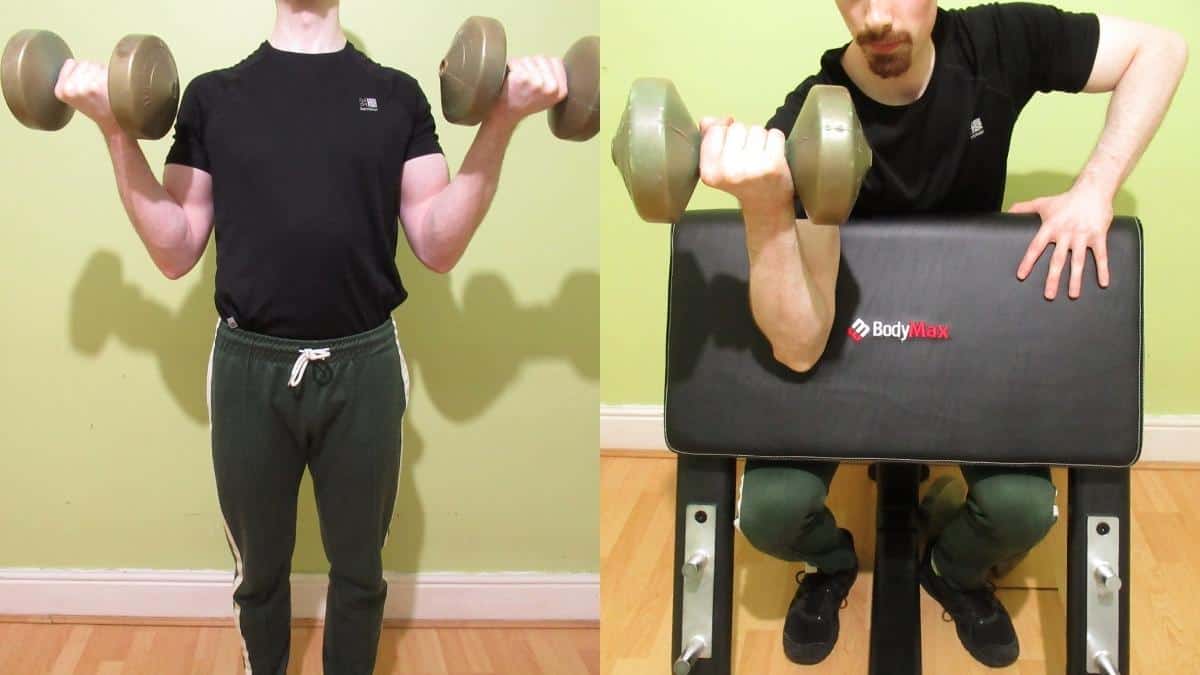 Rather than give you a biceps anatomy lesson and talk about the different regions of the muscle, let's get straight into this 30-minute bicep workout.

In just half an hour, you'll have hit your biceps with 15 mass-building sets and a variety of rep ranges to train all the muscle fibers. As such, this is an excellent bicep workout for size because you're not leaving anything to chance.

You'll be doing exercises that work both the long (outer) head and the short (inner) head of the biceps, as well as movements that train the brachialis and brachioradialis. So let's get into this 30-minute bicep blast.

You're kicking off this hard and heavy workout with the alt hammer curl to focus on building overall arm mass. By performing your hammer curls in an alternating fashion, you'll be able to do more reps per set because each arm is getting a short rest while the other arm works.

The prescribed reps for this exercise are per arm. So you could also think of it as 12-16 total reps if that's easier.

Rest 60 seconds or slightly more between every set in the workout. We slightly overestimated the time it takes to complete each set (60 seconds) on purpose so that you don't go over the 30-minute mark.

Preacher bench dumbbell curls are the second exercise in our 30-minute bicep workout. Although they're effective for building overall size, they emphasize the short (inner) of the biceps by having you curl with your shoulders in front of your torso.

While you can train each arm separately, you might want to work both biceps together if you're in a hurry. The only advantage to doing this exercise unilaterally is that it may slightly enhance your mind-muscle connection.

Smith machine drag curls focus on the long (outer) head of the biceps by having you curl with your elbows slightly behind your torso. As such, this old-school exercise can help you to develop a better bicep peak.

Just make sure that you don't shrug the bar up with your traps. While it's okay to feel a small amount of upper trap activation due to the nature of the exercise, your biceps should do most of the heavy lifting.

The lying wide grip cable curl creates a strong peak contraction and thus a great pump in your biceps. This is partly because the exercise trains your biceps at a short muscle length and partly because cables provide constant tension, which means that your biceps don't get a chance to rest.

You can actually raise your shoulders up slightly as you complete each rep to intensify the contraction. This is because the biceps actually assist the deltoids with shoulder flexion, and so by allowing a moderate amount of shoulder movement, you can generate a stronger peak contraction.

You're going to end this half-hour bicep workout by doing in and out curls to fatigue any remaining and/or stubborn muscle fibers.

The "in" part of this exercise is essentially like a regular bicep curl; the "out" part necessitates that you curl with your arms flared out and your elbows pinned right into your sides.

Also, make sure to use a relatively light weight for this high rep bicep workout because one rep is equal to an "in curl" and an "out curl," so you're doing the equivalent of 24-30 reps here. I hope you like lactic acid.

This 30-minute bicep workout is intense and challenging, so only attempt it if you've been lifting consistently for at least six months. You could also perform this session as a bicep circuit workout by doing one set of every exercise before going back to the starting movement.

The general (and most recommended) protocol for this workout is 60 seconds of work (i.e., one set) followed by 60 seconds of rest. Since most of the exercises in this quick biceps workout will take a bit less than 60 seconds to complete, you can actually rest a bit longer if you'd like.

Similarly, feel free to swap exercises based on your equipment availability and individual weak points. For example, if you don't have a gym membership, you might not have access to cables, in which case banded exercises would be a good substitute.

Similarly, if your biceps are already better developed than your brachialis and brachioradialis, then you might want to perform more reverse curls and hammer curls.