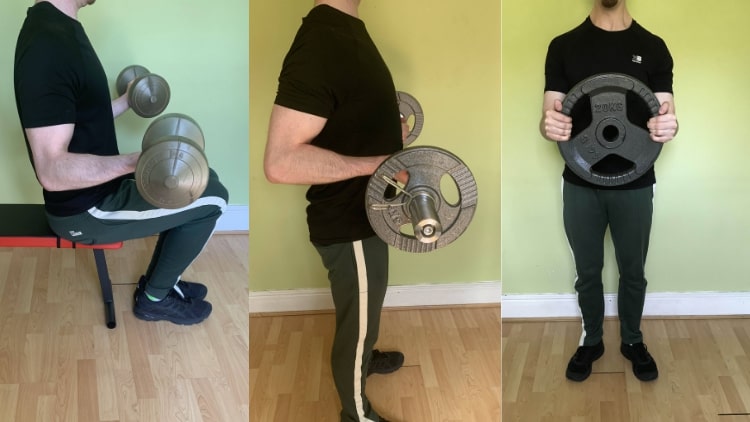 The human biceps respond excellently to high-rep training. After all, when you’re hammering your biceps with multiple sets of 20+ reps, you’re accumulating a huge amount of training volume that practically leaves your bis with no choice but to get bigger.

So building on our ultimate bicep workout guide, we decided to create some high rep bicep workout routines for when you just want to blast your bis and get a killer pump.

Below you’ll find two high rep bicep workouts that will set your arms alight. Although there are only three exercises per workout, you’re still getting plenty of training volume to stimulate new muscle growth while getting a potent pump in the process.

This workout begins with the sitting curl so that you can take your core out of the equation and focus 100% of your attention on thrashing your biceps. Make sure to curl with fully supinated palms so that you can train your biceps at their shortest muscle length.

The EZ drag curl emphasizes the long head of the biceps by having you lift the weight with your elbows slightly behind your torso. It also applies the most tension to the biceps at the top of the rep, which is where the biceps are at their most contracted. As such, it’s an excellent movement for achieving a skin-splitting pump.

Finally, it’s time to finish off your arms—brachialis, brachioradialis, biceps—with hammer plate curls. Yes, you’re only doing two sets here, but in terms of volume (reps x sets x weight), you’re getting plenty of time under tension to stimulate growth, which is what counts the most.

The cable behind the head curl is a unique exercise that trains the biceps in their shortest anatomical (i.e., most highly contracted) position. These repeated, fatiguing contractions mean that the most amount of blood possible is forced into the muscle belly. So make sure to really squeeze your biceps on every rep to enjoy the best effects of this underrated exercise.

Again, you’ll be doing drag curls to target the outer region of your biceps and really sculpt those formidable peaks. Just make sure that you don’t shrug the weight up with your traps. Instead, think about dragging your elbows behind you while simultaneously moving your hands toward your front delts. Works like a charm.

Finally, we’re back to the familiar finishing exercise: plate hammer curls. This movement gives the brachialis and brachioradialis plenty of attention, which are two muscles that are lacking (in comparison to the biceps) on most lifter’s physiques.

You can use high rep bicep workouts every now and again to shock your arms into new growth. Or, you can include them in your weekly workout routine in addition to a heavy, low rep session.

Alternatively, you can perform a high repetition bicep workout to train around injuries.

Whatever the use case, make sure to train close to failure so that you can fatigue as many motor units within the muscle as possible. This is because when you’re training with high reps, the sets don’t become challenging until the very end. So it’s essential to generate enough fatigue in the muscle if you want it to adapt and grow bigger.

James Jackson
James Jackson is a personal trainer who uses his expertise in strength and conditioning to create helpful workout tutorials that show fitness enthusiasts how to build muscle while staying safe in the gym. He draws on the latest sports science data as well as tried and tested training techniques to get the best results for his clients without them having to live in the gym.
View All Posts
Bicep Guides