Does anyone actually have 32 inch biceps?

Discover if anyone has ever built 32 inch biceps. 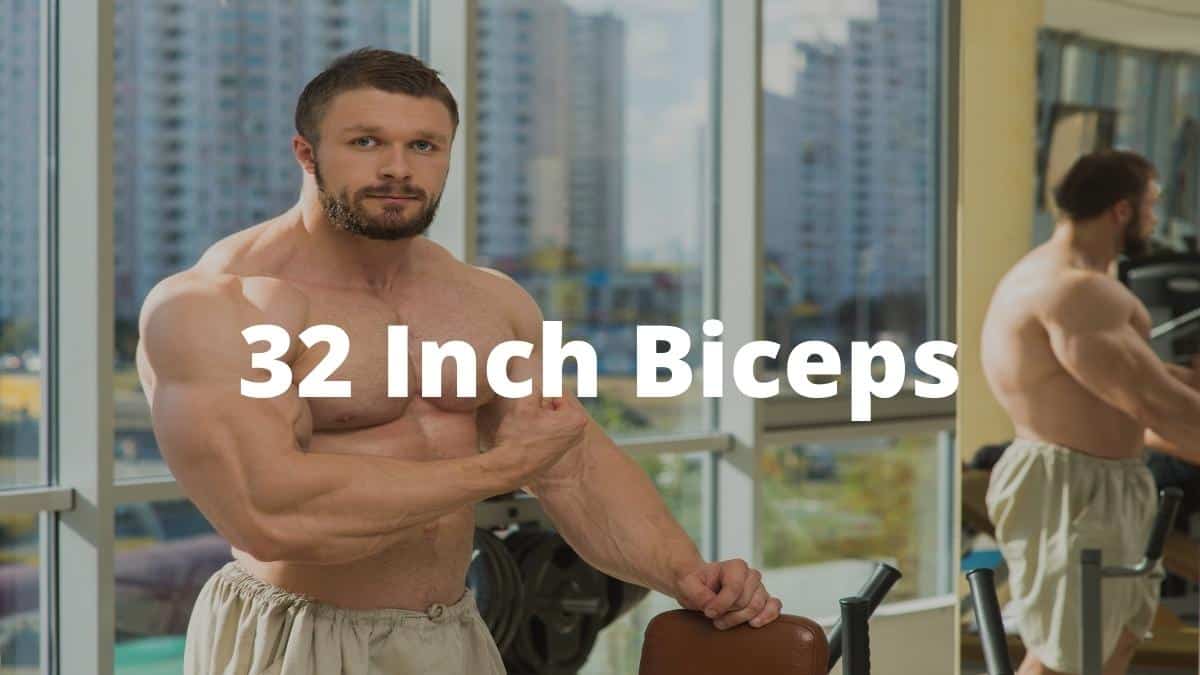 By knowing how your biceps act, you can train them optimally by using the correct lifting technique. But even with the best form in the world, you’re unlikely to ever get 32 inch biceps or 33 inch biceps.

Of course, by lifting weights and eating right consistently, you can definitely build arms that surpass the average male bicep circumference. But still, getting a 32 inch bicep measurement is close to impossible unless you’re obese.

Yet, some individuals do have abnormally large arms due to their genetics, build, body fat level, or a combination of those factors. With that in mind, this guide seeks to explain what might cause someone to have 32 inch biceps, 34 inch biceps, 35 inch biceps, 36 inch biceps, or even 37 inch biceps.

Table of Contents show
Does anyone actually have 32 inch biceps?
Why would someone want to get 32, 33, or 34 inch biceps?
Conclusion: The reality of having 32, 33, or even 35 inch arms

Does anyone actually have 32 inch biceps?

If you know anything about bodybuilding and strength training, you’ll know that achieving a lean 32” bicep measurement is impossible.

However, people with morbid obesity who also have a big frame (and perhaps also a lot of muscle mass) may well register 32, 33, or even 34 inch biceps at the peak of their weight.

Of course, the average obese person certainly doesn’t have arms that big. However, that’s not to say that someone couldn’t theoretically have even 35 inch biceps or 36 inch biceps if they were heavy enough.

There may well be individuals living right now who have such an arm size but who simply haven’t been measured.

If someone is obese and has 32 inch arms, then it’s highly unlikely that they were aiming to get their arms that big.

However, in recent years, some weight lifters have been on a quest to make their arms as big as possible. And one guy almost succeed in getting his arms to measure 32 inches.

Moustafa Ismail is a bodybuilder who built his biceps to a record-breaking 31 inches (obviously not naturally). [1] And while his arms are undeniably huge, you have to wonder why someone would want biceps and triceps that are much larger than most people’s thighs.

Some people just want to become famous, even if only temporarily. Or perhaps some lifers believe that bulking up their muscles to an artificially large size will land them a role in a blockbuster movie or a successful TV series.

Another reason is body dysmorphia. Sadly, some individuals think that their physique is skinny or inadequate in some way when, in reality, it’s often very muscular and may even be envied by other people.

We get a lot of people asking about their particular upper arm size and whether it’s too big or not muscular enough.

Well, after countless hours of research, it’s clear that the only people who have 32 inch biceps (or arms even bigger than that) are those who are obese or bodybuilders who use synthol.

If your arms are 32 inches, for example, then it’s highly likely the rest of your body is also excessively large, which means that your BMI is probably much too high. In turn, this excess weight could be putting your health at serious risk. It’s recommended to talk to your doctor so that they can help you lose weight in a safe and effective manner.

On the other hand, if someone is using synthol to inflate their arms to 32 inches and beyond, then their arms will actually be disproportional to the rest of their body. So even though these weight lifters may not be obese, they’re still putting their health at great risk because these site enhancement oils aren’t designed for human use and, as such, have many adverse side effects. [3]