Are there really bodybuilders who have 50 inch biceps?

Learn why it’s absolutely impossible to get 50 inch biceps (and why you shouldn’t try). 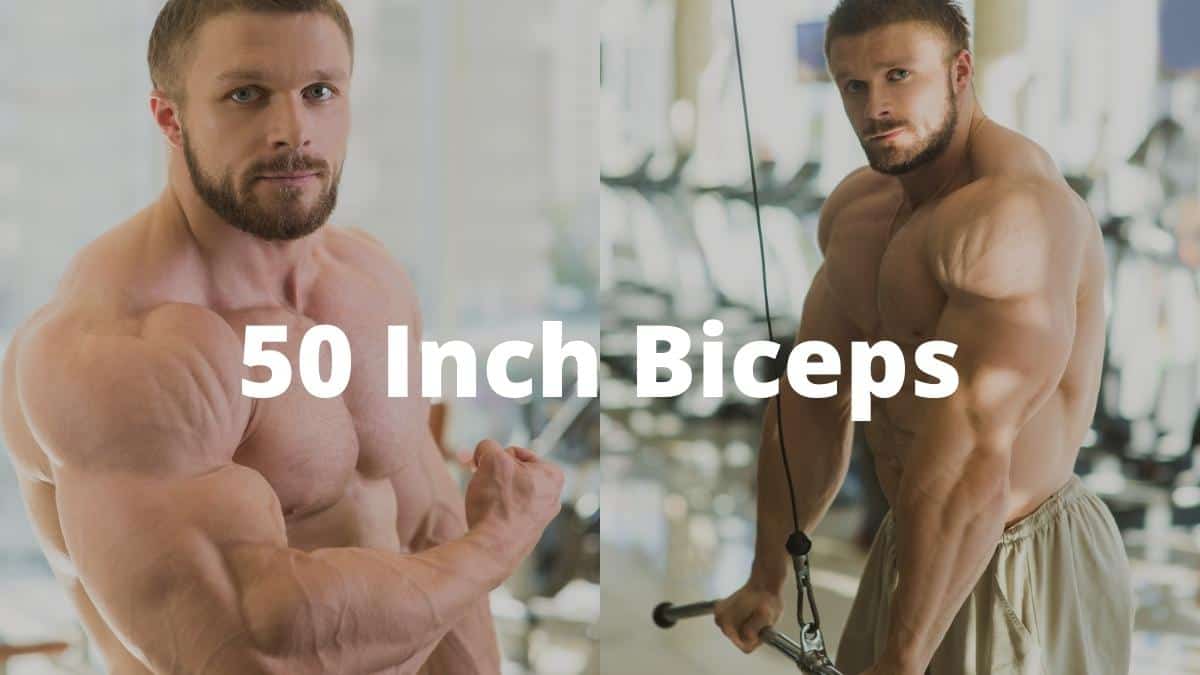 By understanding the actions and functions of the biceps muscles, you can get a great workout by lifting weights with the optimal bicep-building technique.

However, even with grade A form, it's impossible to build 50 inch biceps (or biceps anywhere close to that size, for that matter).

Yet, this doesn't stop people from making videos claiming that there are bodybuilders with 50, 60, or even 100 inch biceps.

The following article explains how these videos are fake and how building even 50 inch biceps is completely impossible.

You can also learn about the ideal bicep size for your height so that you can have more realistic muscle growth expectations.

Table of Contents show
Does anyone genuinely have 50 inch biceps?
But the videos look real
Conclusion

Does anyone genuinely have 50 inch biceps?

I've spent weeks' worth of time researching the biceps muscles and the size potential of the upper arms in humans. I've also observed several of the world's foremost bodybuilders and strongmen.

Nobody that I've come across has even had 50 inch arms, and that's because attaining such an arm size is impossible.

Consider the fact that most professional bodybuilders have arms that are half the size. How could someone then build arms that are twice as big?

The only remotely conceivable way that a human could get 50 or 60 inch biceps is if they were morbidly obese or used synthol. [1] And even then, attaining such an arm measurement is highly unlikely and perhaps even impossible.

Additionally, even people who take synthol "only" achieve 30 inch biceps and 31 inch biceps.

But the videos look real

There are indeed a number of videos and images floating around the internet that purportedly show bodybuilders with 52 inch and even 100 inch biceps.

While a novice lifter who doesn't know much about bodybuilding might believe that these images are authentic, anyone who's been in the fitness industry for more than a few weeks will realize that these images have been distorted.

Yes, these images may well be pictures of bodybuilders who exist in the real world. But the images themselves have been edited to make the subjects look much bigger and taller than they actually are.

Bodybuilders are usually relatively short, so the fact that the height is always greatly accentuated in these images is a dead giveaway that they've been distorted.

Humans are capable of outstanding achievements; just watch the Olympic games. Athletes keep getting better and better every year, and strength athletes are no exception to this.

Yet, when people claim that there are bodybuilders with arms that are twice as big as the upper end of the natural limit, you have to seriously question the authenticity of these claims.

Can anyone seriously believe that there are people out there with 50 inch biceps?

The only reason that we're even having this conversation is that people have posted videos and pictures claiming that such and such a bodybuilder has 50 inch arms.

Ironically, all of these videos consist of still images, which are extremely easy to distort. As mentioned, the evidence strongly points to that fact; the photos have been edited to make the muscle men look far bigger than they actually are (and these lifters are already big).

So if you were a beginner who felt like your biceps were too small, then don't worry because many people lie about their true measurements online and create videos providing unrealistic physique standards.