How did this man get 30 inch biceps?

Meet the bodybuilders with 30 inch arms. 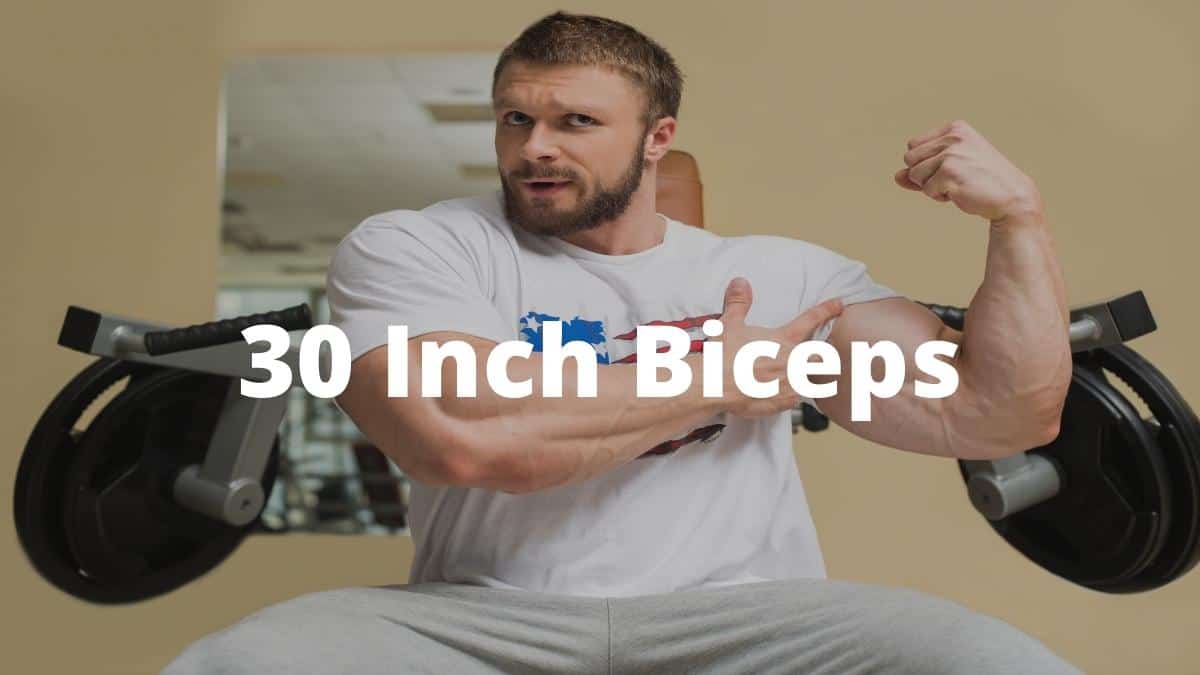 Understanding the way that your biceps act (flexion of the elbow, supination of the forearm) can improve the quality of your results because you'll be able to lift with better technique.

Similarly, measuring your biceps loosely can give you a bigger measurement.

However, even with heavy lifting and strict form, the chance of building 30 inch biceps is so unlikely that it might as well be impossible.

But that doesn't stop some people from trying.

This article introduces you to a man—Moustafa Ismail—who succeeded in building 30 inch arms.

Disclaimer: This article contains a discussion of anabolic steroids and site enhancement oils. We do not endorse the use of these substances for increasing muscular size or physical performance.

Table of Contents show
Does anyone have 30 inch biceps?
Romario Dos Santos Alves
Moustafa Ismail
Why would anyone want to get 30 inch arms?
Conclusion: The ugly truth about building 30 inch biceps

Does anyone have 30 inch biceps?

Yes, believe it or not, there are weight lifters who have 30 inch "biceps." I've put biceps in quotation marks because, as you'll soon see, their 30 inch arms are comprised of far more than just muscle mass.

It's unclear whether Romario Dos Santos Alves's bulging biceps and triceps ever crossed the 30-inch mark. However, they certainly look like they could be 30 inches or more.

Romario Dos Santos Alves was in the news a while back, but there are even more recent videos of him training in the gym (he's actually very strong) and working in his barbershop.

Unlike other synthol users, Romario had very well-developed biceps before he started taking site "enhancement" oils.

He says in an interview (which is linked above) that he only started taking these oils when he was introduced to them by big guys in his new gym. So perhaps he felt inadequate when he came into contact with these new, big bodybuilders, who were presumably using these dangerous oils themselves.

Romario almost had to have his amputated. But luckily, at the last second, the doctor said that he no longer needed to sacrifice his arm.

The rest of his body, while not small, is way out of proportion with his biceps and triceps.

In an interview, he notes how he (or, more specifically, his arms) started receiving compliments and so he endeavored to make his bis and tris as big as possible in order to keep up the attention.

Moustafa Ismail and his bulging biceps were once recognized by Guinness World Records.

So here we have someone who's interested in being a celebrity, which is the main reason why ordinary gym-goers turn to synthol; they want fame and attention more than strength!

Why do I say that?

Well, synthol doesn't increase your muscle mass or strength—it just fills your arms with oil. So people like Moustafa aren't chasing physical excellence in the traditional sense—otherwise, they'd use anabolic steroids—they just want to get noticed.

For me, that's the saddest part of this synthol trend. Most of these guys aren't professional bodybuilders or any kind of competitive athlete. They pretty much just want validation in the form of compliments from strangers in the street and random people online.

Why would anyone want to get 30 inch arms?

Having researched all the prominent synthol-arm men, I begin to notice a trend regarding their site enhancement oil usage.

Were they injecting these dangerous chemicals to increase their physical performance?

No, they were bulking up their biceps and triceps to get noticed. That's right; to become a temporary celebrity.

So perhaps I'm not the best person by giving them more attention and feeding their delusion.

However, I think that it's important to make the point that these men all started their synthol usage from a feeling of inferiority.

After all, these substances do nothing to increase your muscle mass or enhance your strength. If anything, they likely inhibit muscle hypertrophy.

So the only plausible explanation for using these oils is to get noticed when you go out in the street or post photos online. It's a shame that these guys couldn't be satisfied with a regular, muscular physique, which some of them already had before they started using these oils.

Not only does having 30 inch biceps make the rest of your body look small and weak when it may actually be normally sized, but the substances that you need to take to get 30 inch biceps come with many adverse side effects. [2] In some cases, site enhancement oils can also cause death.

Is having a 30 inch bicep measurement and setting a few records really worth sacrificing your health?

For people who are desperate for attention, it appears that it often is. These folk either have reverse anorexia (they think that they're skinny, but they're actually muscular), or they just want some fleeting attention (Wow! Your arms look huge! Can I take a picture?).