How impressive is curling 80 pound dumbbells as a natural lifter?

How impressive is an 80 pound bicep curl for a natural lifter? 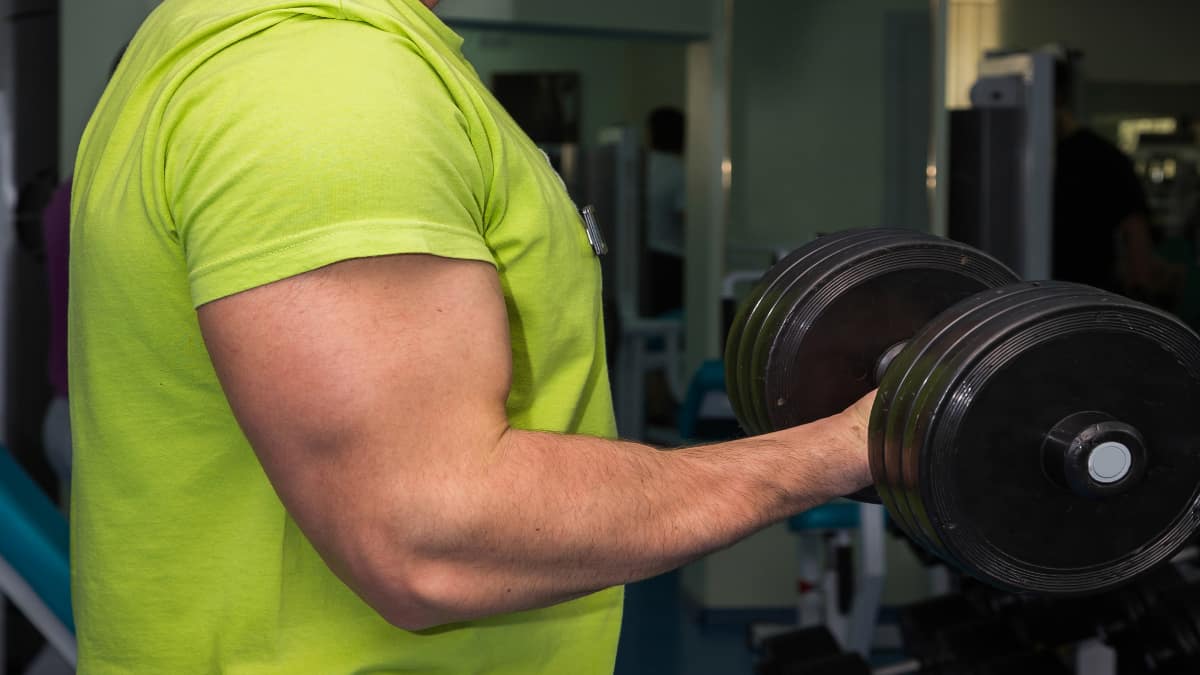 If you know anything about dumbbell curl standards, then you'll understand that curling 80 pound dumbbells with good form requires an incredible amount of biceps strength.

Our main biceps page has many training tutorials. But this series of articles is unique because we're drawing on real-world case studies to see what kind of muscularity and training experience it took different lifters to curl 80 lbs (and other weights) in each hand.

This way, you'll be able to compare your current strength level and physique to see how you stack up. You can also check out our other guides about common curl weights.

How impressive is curling 80 pound dumbbells?

Of course, the stricter your form and the more reps and sets that you do, the more impressive an 80 pound bicep curl is.

Still, curling 80 pounds is a lot of weight, no matter how you lift it. As long as your biceps are doing the majority of the work, you should be extremely satisfied with an 80 lb bicep curl, even if you can only get a few reps.

After all, bench pressing 80 lbs in each hand is pretty impressive. So if you can curl someone's bench press, then you're very strong indeed.

Is an 85 lb bicep curl good for a natural lifter?

However, savvy lifers understand that curling an extra 5 lbs in each hand is highly challenging when you're already as strong as an ox.

You'd need to be curling 80 lbs for at least 6-8 reps before you could even budge the 85s with your biceps.

Sure, going from an 80 lb curl to an 85 lb curl is only a 6% increase, but that's a lot when you're already pushing the limits of natural biceps strength.

Is an 80 lb barbell curl a good lift?

An 80 lb barbell curl is a good amount of weight to lift, providing that your form is strict.

Obviously, an 80 pound barbell curl isn't going to catch anyone's attention (unless you're really skinny), but lifting that amount of weight can build a serious amount of biceps size if you train consistently.

After all, your biceps can't tell how much resistance you're curling; they just respond to tension. And oftentimes, it's better to lift lighter weights with perfect form than it is to max out but not feel your biceps working.

You might not get amazing results if you're only curling an 80 pound barbell for a few reps.

However, if you're doing multiple sets of 10-15 reps and training close to failure, then your biceps will get plenty of mass-building stimulation.

Learn the kind of training experience and muscularity that it took people of various builds and body weights to curl 80 pounds with dumbbells.

Michael Phaup operates the YouTube channel lolmmmol, which has an incredible video of him doing 80 lb dumbbell curls for 7 reps per arm using perfect form.

This video, which is not even filmed properly, has rightly amassed millions of views. At the time of recording, Michael, who's a competitive arm wrestler, weighed 203 lbs at a height of 6 ft.

When you consider the fact that most lifters—who have good physiques in their own right—can't even swing 80 pound dumbbells around for two reps, you begin to realize what an incredible feat of strength Michael Phaup has accomplished.

As if curling 80 lbs for 7 reps per arm wasn't remarkable enough, he did extremely slow negatives on his final reps to take full advantage of all the fiber-tearing muscle tension. I bet his biceps felt it the next day.

He got 5 reps per arm and could probably have done more if he'd attempted this feat of strength when he was fresh.

I'm not sure how much Jedd weighed in that video, but he looks big.

If you've read our other articles discussing various curl weights, then you'll have realized that the heavier that the weights get, the bigger the guys become. To put it another way, you don't see many guys weighing less than 200 lbs or who're under 6 feet curling 80 pound dumbbells for reps.

That's because people with bigger frames generally have a better capacity to accumulate muscle mass and that most certainly includes biceps mass.

Andrew Grant posted a video of himself back in 2013 strict curling an 80 pound dumbbell for reps.

Although he didn't use a full range of motion after his initial rep, Andrew's case study raised a good point.

If you're aiming to perform 80 lb dumbbell curls for full reps, then starting with half reps can be a viable strength gaining strategy.

In fact, you'll often see some of the strongest curlers doing half reps with incredibly heavy weights to get their biceps used to handling extra tension.

In addition to really controlling the dumbbell during the negative phase of the rep, Andrew also used a supinated grip rather than a neutral grip, which definitely increased the difficulty of the exercise.

Conclusion: Who can realistically achieve an 80 pound dumbbell curl?

The truth is that most lifters will never be able to curl 80 pound dumbbells strictly no matter how hard they work. Why?

Because the average lifter simply doesn't have the frame size that's needed to accumulate the muscles mass, which in turn is needed to curl 80 lb dumbbells.

Moreover, most people who you see curling 80 pound dumbbells can only lift that weight for a few hard-earned reps.

With that in mind, if you can perform an 80 lb bicep curl for 5 clean reps per arm, then you're definitely in the top 1% of curlers in the world. After all, the average gym-goer can't even bench press that much weight in each hand!