The incline bench is your best friend when it comes to beefing up your biceps and brachioradialis. 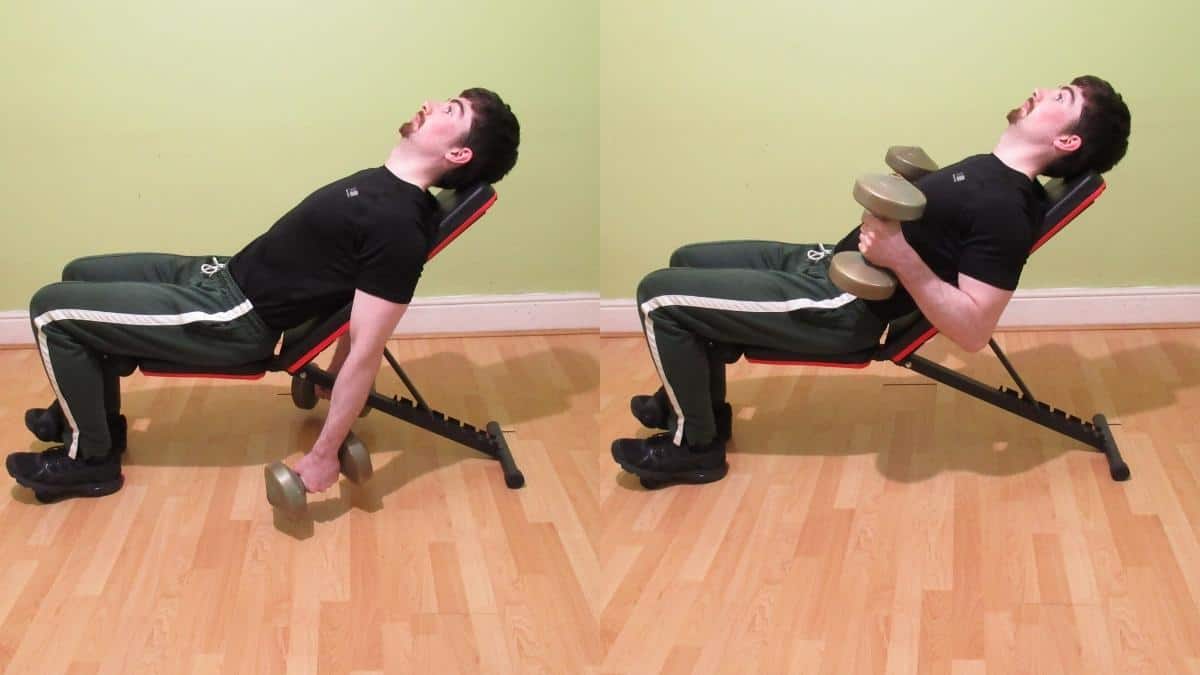 Incline hammer curls are a brilliant exercise for building the bicep muscles because they put your arms under a deeper stretch than regular hammer curls. This weighted stretch breaks down more muscle fibers and stimulates faster hypertrophy.

The downside is that the incline dumbbell hammer curl is harder to set up than the traditional version because you need access to a weight bench and the know-how to select the correct incline dumbbell curl bench angle.

This article explains the benefits of the incline hammer curl, the muscles that it works, and also the common mistakes that lifters make when performing it.

Incline dumbbell hammer curls primarily work the biceps brachii, brachialis, and brachioradialis because all of these muscles are powerful elbow flexors, which is the main anatomical function that this exercise trains. [1]

The forearm flexors and extensors also get worked to an extent because their service is required for holding onto the dumbbells.

How to do an incline dumbbell hammer curl

There's no denying that incline bench hammer curls are an excellent arm exercise. But in order to reap the rewards of this bicep-builder, you need to ensure that you're not making any of these three common mistakes.

Swinging the weights up

Bracing your back against the bench prevents you from using your legs and core muscles to swing the weights up. So in this sense, the exercise is more effective for isolating the target muscles than the cross body curl. However, since your arms are still free to move around during the incline hammer curl, it can be tempting to fling the dumbbells up with the help of your shoulders.

To be sure, a small amount of shoulder flexion at the top of each rep is perfectly fine. After all, the bicep is a shoulder flexor (albeit a weak one). And you may actually find that you get a better contraction when you allow your front delts to rotate forward a bit.

However, you should still initiate every rep with your biceps. Don't swing your shoulders to get the weights moving. If your biceps can't lift the dumbbells by themselves, then the weights are too heavy for you.

If you set the bench angle too low, then not only will you put your shoulders in a potentially compromising position, but you'll also change the resistance curve of the exercise and make it less effective. This is because the biceps are most capable of producing force at 90 degrees. So this is where the exercise should be the most challenging. [2]

By all means, experiment with the angle slightly by moving the backrest up or down one notch. But don't lower the backrest below 60 degrees if you can help it because otherwise, your biceps won't receive a proper contraction.

If you don't want to deal with the bench, then there is a version of the cable incline curl that you can do without one. But obviously, this exercise still involves more than just simple free weights.

If you're going to do biceps exercises with dumbbells, then make sure that you remove the term "half rep" from your lifting vocabulary.

Even though such a training style gives you the appearance of having greater strength by enabling you to lift heavier weights, performing half reps actually makes you weaker. This is because you're not training all parts of the range of motion and are thus recruiting and strengthening fewer muscle fibers.

Not only that but by lifting weights that are too heavy for your arms, you're also leaving yourself open to injuries and various aches and pains.

Instead, strive to get a full range of motion on every rep that you perform. Curl the dumbbells toward your shoulders for a proper contraction, and then flex your triceps at the bottom of each rep so that your biceps are fully lengthened.

Incline hammer curls have numerous benefits over the standard hammer curl. So if you're interested in maximizing your muscle growth via an intelligent exercise selection, then you'll definitely want to consider making space in your training program for this underrated arm exercise.

Moreover, the extra stretch may also lead to faster muscle growth because the eccentric is such a crucial component of a hammer curl repetition—it's where most of the muscle fibers get broken down.

As such, it's imperative to control the lowering phase (eccentric) of the rep so that your muscle fibers receive plenty of growth-stimulating tension.

You can also do a prone incline curl if you want to work your biceps from the opposite angle by facing the other way on the bench.

Regular hammer curls are very easy to cheat on because you can just fling the weights up with your back, legs, and core. However, with the incline dumbbell hammer curl, your feet are planted on the floor, and your back (and thereby your abs) is stabilized against the bench.

So while you could still swing the weights up with your shoulders to an extent, the bench naturally helps you to maintain the correct training technique because it forces your arms to do most of the lifting. This is particularly helpful if you're a beginner who's still learning the ropes or if you're someone who often gets tempted to ego lift.

You can also perform the incline bench alt hammer curl where you work one arm at a time if you want to make doubly sure that you're training each arm with the correct technique. See our guide to the alternating hammer curl for more information.

Because incline dumbbell hammer curls naturally take your other major muscles out of the equation, it's much easier to keep the tension on the target muscles, namely, your biceps, brachialis, and brachioradialis.

When all you have to do is curl the dumbbells toward your shoulders, it's also much easier to develop a strong mind-muscle connection. This is because you don't need to worry about stabilizing your core, which takes a great deal of effort from your central nervous system. As such, you can channel all of your energy into blasting your biceps and brachialis.

In this way, the exercise is similar to preacher hammer curls. The only difference is that the incline version emphasizes the long head of your biceps, whereas the preacher variation prioritizes the short head because, with the latter, you're curling with your arms in front of your body.

How effective are Incline hammer curls?

Incline hammer curls might well take longer to set up than the regular version. However, considering the extra bicep stretch that they produce and the fact that they really isolate your arm muscles, incline hammer curls are an undeniably effective exercise, not just for your upper and lower biceps but for your brachialis and brachioradialis, too.

Just make sure to get a full stretch and contraction on every rep for the best results. This way, you'll stimulate the recruitment of more muscle fibers because every part of your biceps will be receiving tension.