Learn how to do a Zottman curl with resistance bands using the optimal form. 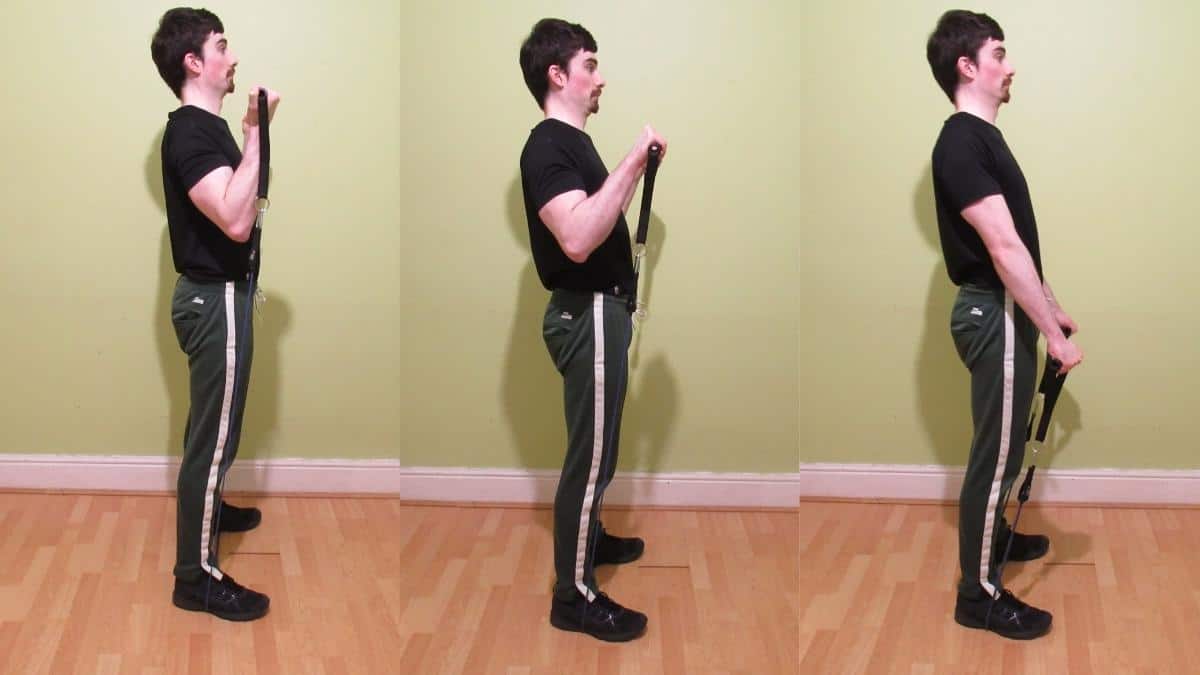 Due to the biceps insertion at the radial tuberosity and at the fascia of the forearm (via the bicipital aponeurosis), the biceps, as its name suggests, have a dual function. These two functions are elbow flexion, which is to say decreasing the distance between your lower and upper arms, and forearm supination, which involves turning your hands from a palms-down to a palms-up position.

Knowing these anatomical facts, you can modify regular resistance band curls to put your biceps in a position of mechanical disadvantage in order to shift the emphasis onto your brachialis and brachioradialis muscles.

As in the DB Zottman curl, you can implement this modification during the resistance band Zottman curl by rotating your palms at the halfway point of the exercise. This enables you to lift the weight with all of your arm muscles, but it also forces you to lower the weight with mostly just your brachialis and brachioradialis, which is particularly beneficial considering that these two muscles are severely lacking on the physiques of many lifters.

How to do a Zottman curl with resistance bands

The Zottman resistance band curl has a lot going for it. However, there are two main downsides that might make you think twice about making this movement one of your primary resistance band bicep exercises.

You can do banded Zottman curls absolutely anywhere. So whether you're bored at home or on an exciting travel adventure, you can always rely on your trusty resistance bands to achieve a great muscle-building workout.

Unlike the Zottman kettlebell curl, you don't have to hunt down two free weights of the exact same size, which can be challenging if you train in a crowded gym. Instead, you just need to connect one resistance band to a set of handles—then you're ready to lift.

The main perk of this convenience from a muscle growth standpoint is that you don't have to skip your workout (and potentially lose muscle) if the gym is closed and you therefore don't have quick access to free weights.

While you might not become a mass monster from lifting bands, they're more than adequate for maintaining your muscle mass and getting in great shape.

Con: The technique is challenging

Many people fall at the first hurdle when they try band Zottman curls for the first time. Why is that?

It's because they don't use a thumbless grip.

If your resistance bands don't have handles, then you can just grab them at one end and keep your foot on the other. While this approach requires a firmer grip, it actually makes rotating your palms a bit easier and less jarring on your wrists.

On the other hand, if you just want to work your biceps, then you can perform a concentration curl using resistance bands instead.

Pro: It works the brachialis and brachioradialis

Like TRX Zottman curls (which are also great if you train at home), resistance band Zottman curls overload your brachialis and brachioradialis muscles with plenty of tension.

This is because you can use your biceps to their full potential on the way up—in order to lift heavier weights—but not when you lower the weight. As such, your brachialis and brachioradialis get subjected to more tension during the eccentric phase of the rep than they would during a banded reverse curl.

So if you already have decent bicep development from years of doing underhand curls, then performing banded Zottman curls will help you to sculpt more symmetrical arms by building up your brachioradialis and brachialis muscles.

The further you stretch resistance bands, the heavier they become. Therefore, you don't get much tension in the initial phase of a resistance band Zottman curl. In fact, the exercise only begins to challenge you when your biceps are maximally contracted.

There are three ways around this problem.

First off, you can stand on a step-up platform so that the resistance becomes heavier sooner.

Second, you can double loop the band in order to make it twice as heavy.

Finally, you can perform high reps in order to get more time under tension because, remember, you're hardly getting any tension in the first part of the lifting motion unless you make one of the above modifications.

Should you do Zottman curls with resistance bands?

If you alter the resistance band Zottman curl to get around its natural defects, then you can turn it into a phenomenal muscle-building movement. And that's in addition to the convenience that the free weight versions simply don't provide.

Just make sure to always hold your band handles with a thumbless grip so that you can rotate your palms effectively. Alternatively, use a single band to make the aforementioned modifications easier.