Is curling 90 lbs and 95 lbs with a barbell and dumbbells good?

Is a 90 lb barbell curl enough to build your biceps? 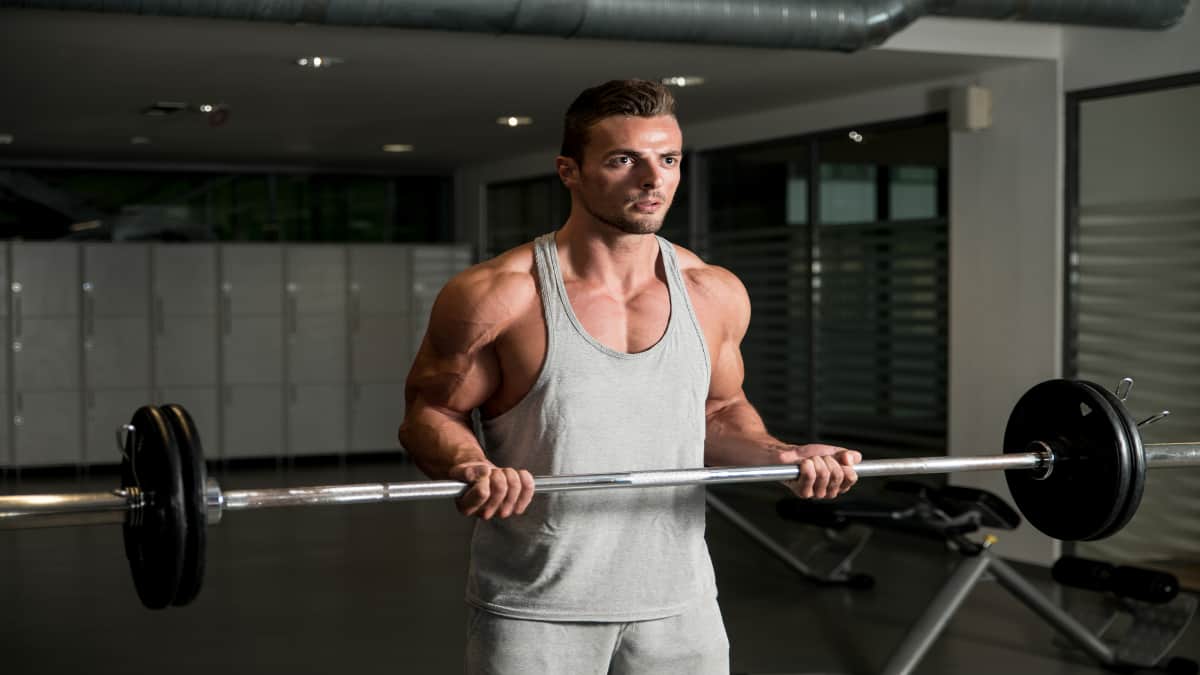 90 pounds is way above the average bicep curl weight for a male lifter if we're talking about 90 lb dumbbell curls. Earlier, we noted that curling 80 pound dumbbells requires exceptional bicep strength, so just imagine how strong you need to be to curl an extra 10 lbs in each hand!

Yet, even a 90 lb barbell curl is still an excellent lift providing that your form is strict.

With that in mind, this guide seeks to learn—by using real-life case studies—what kind of lifter is capable of curling 90 pounds for reps.

See How Strong Your Bicep Curl Is:

A strict 90 pound barbell curl is a very good lift and can build a sizable amount of biceps mass if you perform enough reps and sets.

Of course, the lower your body weight and the less training experience you have, the more impressive a 90 lb barbell curl is.

But that's not to say that intermediate and advanced lifters necessarily need to be curling more than 90 lbs if they want to build their biceps.

While there are definitely bodybuilders who can curl much more than 90 pounds with a barbell, you can achieve grade A bicep development (by natural lifter standards) if you understand how to apply maximum bicep tension with a 90 pound barbell.

Performing 15 controlled 90 pound barbell curl reps over a full range of motion is much better for biceps hypertrophy than lifting 90 lbs in each hand for a few sloppy back-breaking reps.

Is a 90 lb dumbbell curl realistic for natural lifters?

It depends on your training experience and genetics. Do you have a decent frame and the willingness to train hard consistently over a number of years?

If so, then you might just have what it takes to curl 90 pounds in each hand naturally.

Having a big frame makes it easier to accumulate muscle mass because longer bones give you extra space to "hang" all of that muscle tissue.

But if you're not gifted with top-tier mass-building genetics, then you can still train your way to a 90 lb bicep curl by bulking up to a higher body weight and making your biceps development a big priority.

Start off by performing low rep curls so that your biceps can get used to handling heavy fiber-tearing tension. Then, once you can do 8-10 reps with a given weight, increase the resistance and shoot for sets of 2-3 reps. If you keep repeating this process over a number of months and years, then you might be able to achieve a 90 lb dumbbell curl as a natural lifter. [1]

Learn the level of muscularity and training intensity that it takes to perform a 90 lb curl in each hand.

Robby Delwarte has the three qualities that most lifters struggle to attain at the same time; he's strong, ripped, and jacked.

He posted a video of himself curling 90 lb dumbbells for a few reps, after which he immediately started smashing out some incline bench presses.

Of course, with this amount of weight in each hand, Robby's form wasn't perfect. He obviously used some momentum to get the weights moving and would have probably got a better workout by dropping the resistance by 15 lbs.

That said, most lifters couldn't even budge the 90s with the worst form in the world. Heck, the vast majority of gym-goers would love to bench press that much weight!

And here we have a guy doing 90 lb dumbbells curls with very decent form. It's impressive by anyone's standards.

The man behind the YouTube channel BezzyB_HWOZ posted a video of himself doing 90 lb hammer curls with pretty good form.

Even though he used a neutral grip and only did 2 reps with each arm, that's still impressive considering that he wasn't swinging the weights that much. If you search on YouTube, you'll find videos of people "curling" 90 lbs with 10x worse form than this guy.

This fella has the kind of bicep mass that you'd expect for someone who curls 90 pound dumbbells for reps. His arms look lean, vascular, and they have plenty of size to them; it would take years to build a physique like that.

The previous two case studies highlighted the achievement of a 90 lb dumbbell curl. But since lifting that much weight is unrealistic for most natural trainees, let's take a look at someone curling 95 pounds with a barbell.

The man behind the YouTube channel El Gato posted a video of himself curling 95 lbs with textbook form. Seriously, if you want to see what proper bicep-building form looks like, make sure to watch his video.

My only recommendation to El Gato would be that he should extend his elbows a bit more at the end of each rep. Other than that minor criticism, his technique was just about the best you're going to see in a commercial gym.

A 95 lb barbell curl is a solid lift for any natural lifter, and this guy was lifting it all with his biceps. There was no leaning back and no swinging with the shoulders.

If he cuts down to a lower body fat level, his biceps will look really good because, unlike most people, he's put his ego to the side and prioritized his form.

Conclusion: How impressive is curling 90 pounds for naturals?

A 90 lb barbell curl and a 90 lb dumbbell curl are both impressive lifts for natural lifters.

Of course, a 90 or 95 pound barbell curl isn't going to go down in the record book. However, 90 and 95 lbs is still plenty of resistance to sculpt some substantial biceps size, especially if you're performing relatively high reps with good form. [2]