Are you strong if you can do 40 lb dumbbell curls for reps? 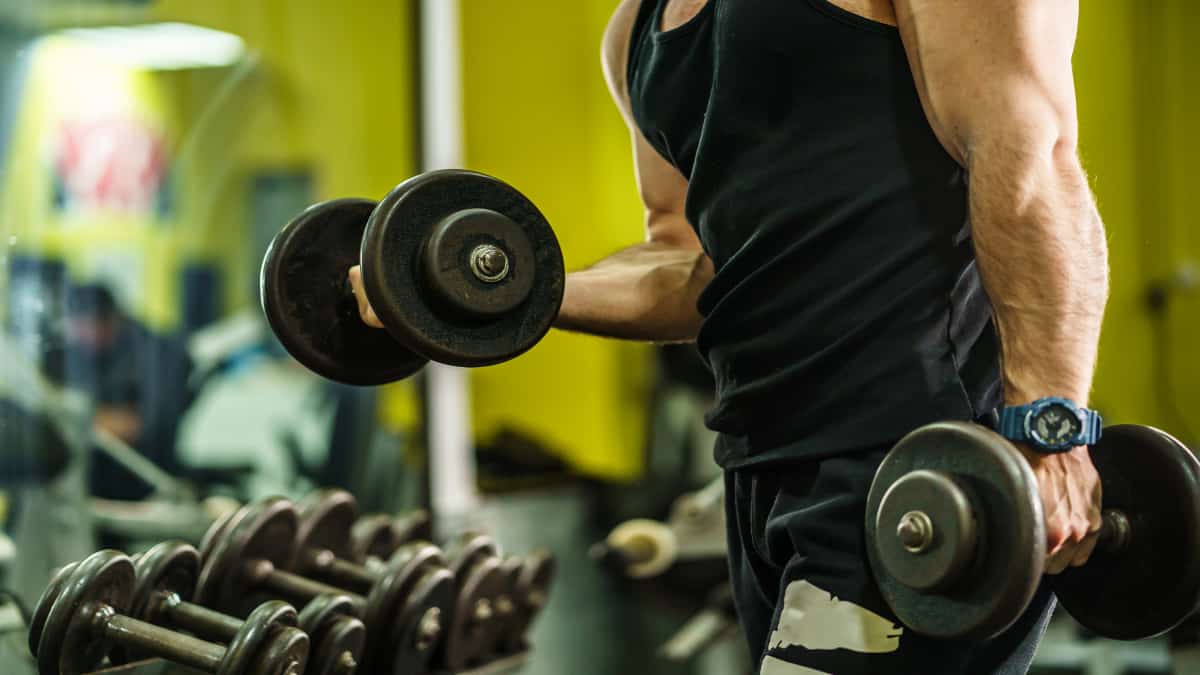 As you’ll soon learn, the answer depends on the quality of your form and the number of reps and sets that you’re performing.

In general, however, a supinated 40 lb dumbbell curl is right around the average curl weight for someone with moderately strong biceps. But let’s get into the specifics to learn precisely how impressive a 40 pound dumbbell curl really is.

See How Your Strength Stacks Up:

Yes, in general, curling 40 lbs dumbbells for reps is an impressive feat of strength, providing that you’re lifting technique is good. Using a moderate amount of momentum on your last few reps, while not ideal, is still okay as long as the majority of your repetitions are performed while keeping your shoulders and elbows still.

Additionally, although doing hammer curls with 40 lb dumbbells is good if your form is strict, it’s not as impressive as doing 40 lb bicep curls with a supinated grip. This is because when you use a neutral grip during hammer curls, your brachialis and brachioradialis are in a stronger force-producing position.

Conversely, when you perform a 40 lb bicep curl with a supinated grip, your biceps take over the reins and don’t get as much assistance from your brachialis and brachioradialis muscles.

A 40 lb barbell curl isn’t going to go down in the record books unless you perform hundreds of reps with perfect form. However, curling a 40 lb barbell can still produce results if you use very strict form, train close or too muscular failure, and perform plenty of sets. [1]

Additionally, if you have a lower than average body weight or are new to weight lifting, then curling 40 lbs with a bar—for reps—is actually a good milestone to reach.

Likewise, if you’re a woman, then curling a 40 pound barbell is also a good achievement because women usually have much less upper body strength than men (things are closer when it comes to lower body strength).

What matters most, however, is the quality of your form and the number of reps that you perform. While 40 lbs isn’t a lot of weight to lift with a barbell, it can actually challenge your biceps quite a lot if you perform high reps. Doing sets of 20-30 reps while training close or to complete muscular failure will really make your biceps burn while providing a potent hypertrophic stimulus. [2]

After all, the research shows that as long as you train hard, performing high reps with light weights can produce comparable results to performing lower reps with a heavy weight.

If you want to know what curling 40 lb dumbbells looks like for people of different builds, body weights, genders, and strength levels, then these case studies are for you.

Daniel McClain posted a video of himself doing high rep 40 lb dumbbell curls with pretty good form. What’s clear immediately is that this man, while not a bodybuilder, has an excellent physique with good definition and plenty of muscle mass.

His form started off very clean and controlled. He was mainly using his biceps to lift the dumbbells and managed to achieve a full range of motion.

However, as the set progressed, you could see that he was initiating his reps with momentum. Now, using some momentum is usually okay as long as you control the weights on the way down.

The issue is that Daniel appeared to be shortchanging himself by failing to control the final part of the range of motion with his biceps. Before his elbow was completely locked out, he was already starting to lift the other dumbbell. This is a dead giveaway that he was trying to rush through his reps (so that he could perform more total reps) rather than perform fewer reps with grade A technique.

Nevertheless, Daniel displayed impeccable strength-endurance to do 20 reps per arm. While his form wasn’t perfect, it was at least as good as average. Additionally, it just goes to show that while perfect technique is always an ideal to strive for, you don’t have to lift perfectly in order to get great gains.

The woman behind the YouTube channel TheCannonGIJolie posted a video all the way back in 2009 of her curling 40 lbs dumbbells for reps.

She did 6 reps with 40 pound dumbbells, which is more weight than some men can lift.

Obviously, it was clear that she found every rep highly challenging and had to use some momentum to get the dumbbells up. Nevertheless, it looked like her biceps were still doing the vast majority of the work.

She also mentioned in the comments section that she usually lifts lighter weights with perfect form. She was just doing some 40 pound dumbbell curls to test her strength and show the world that it’s possible for a weight training woman to dumbbell curl 40 lbs.

Keith Russell posted a video of him doing 40 lb curls with good form and remarkable training intensity. If you want to know what training extremely close to muscular failure looks like, then make sure to watch his entire video.

You can tell that Keith was really trying to use strict form because he kept his elbows and shoulders still for the vast majority of his reps. Or, to say it another way, his biceps were probably doing about 90-95% of the lifting.

The only improvement that I would recommend is that he should avoid pausing at the top of his reps. The danger of this habit is that you often start to throw the dumbbells up and skip the contraction. In other words, you let your front delts handle the final part of the concentric phase of the rep when, ideally, your biceps should be contracting as hard as possible.

How can you progress beyond curling 40 lb dumbbells?

Practice, as they say, makes perfect. With that in mind, the best way to move beyond 40 lb dumbbell curls is to curl on a weekly basis, perhaps even twice per week if your biceps can handle it.

Strength is a combination of muscle size and skill. But since curls are a fairly straightforward exercise to master (especially in comparison with something like a deadlift), your curling strength mainly comes down to the visible muscularity of your biceps.

So make sure that you’re consuming enough protein and quality calories to support new biceps development. [3] Also, aim to get enough sleep.

If you’re doing everything right but are still curling 40 lb dumbbells for the same number of reps months and years down the line, then you might be training your biceps either too frequently or with too much volume.

Often, scaling back your resistance training volume makes it easier for you to recover, which in turn allows new muscle growth to take place.

Conclusion: Who should be able to do a 40 lb bicep curl?

If you’ve got 6 months of serious weight training experience under your belt, then you should be able to do 40 lbs dumbbell curls for a few reps at least.

Just remember as well that you don’t necessarily need to ever curl more than 40 lbs to get results. It’s entirely possible to build sleeve-busting biceps with nothing more than a pair of 40 lb dumbbells and excellent lifting technique.