How to do every type of cable French press

Here are 10 cable French press variations that you can use to grow your triceps. 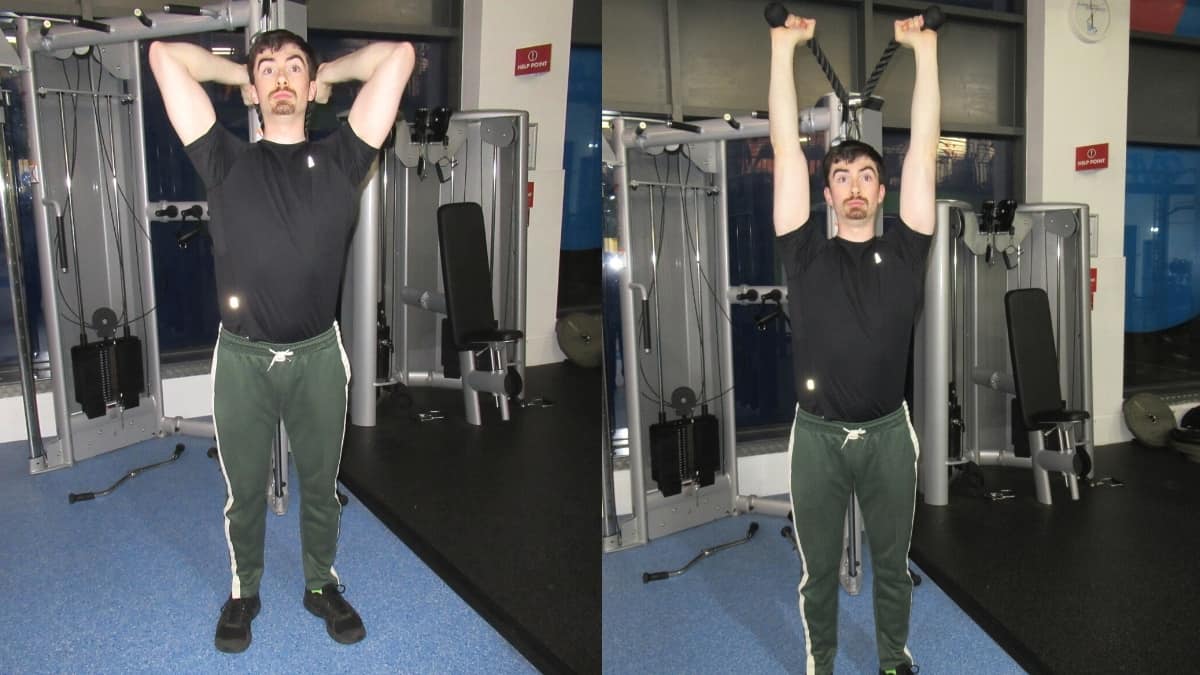 The standing cable French press challenges your triceps with constant, mass-building tension throughout the entire range of motion, which naturally results in a powerful muscle pump and a robust hypertrophic stimulus.

While the barbell French press certainly enables you to lift heavy and thus provoke size gain, free-weight French presses also tend to put more pressure on the elbows and tricep tendons than their cable counterpart.

So if you want to build your triceps while keeping your connective tissue structures out of harm’s way, then the rope French press is the way to go.

This guide covers 10 different cable French press variations so that you can get a great workout regardless of what attachments you have.

How to do a rope cable French press

In addition to the rope tricep French press, there are 9 other types of cable French presses that you can do. Learn the pros and cons of each variation to see which exercise is right for you.

That’s right; your triceps don’t get a chance to rest until the set is over when you do a French press with cables. Even when your elbows are locked out, the pulley system is still exerting some kind of force on your triceps.

Additionally, since you’re performing the exercise in a seated position, you don’t have to put as much effort into stabilizing your core because the bench basically does it for you. This done-for-you stabilization frees up more energy and focus, which you can use to give your triceps a better workout by establishing a stronger mind-muscle connection.

The only downside of the seated cable French press (depending on your point of view) is that it burns fewer calories on a per-set basis than the standing version. This is simply because your legs and abs aren’t as active when you’re sat down, which means that your body doesn’t have to expend as much energy.

But since the cable French press is an isolation exercise, it’s not as if you’re going to be lifting masses of weight. So even though the standing version demands more core strength than the seated variation, the extra abdominal exertion required by the standing cable French press probably won’t impair your ability to train your triceps; you’re simply not lifting heavy enough to where core stability becomes the limiting factor.

Performing a kneeling French press with cables pumps up your triceps and, depending on how you do the exercise, challenges your isometric ab strength as well.

To keep the movement triceps-focused, use a low kneeling position where your hamstrings are resting on your calves. Since your hands are so close to the pulley during this position, it’s really easy to get the rope behind your head, which in turn helps you to conserve energy and thus train your triceps harder.

You can also opt for a high kneeling rope French press if you want to give your abs a decent isometric workout while training your triceps.

Either way, the kneeling cable French press is a valuable exercise for those without an adjustable pulley system because, as mentioned, it’s easier to get the rope into position when your hands are closer to the pulley.

This is simply because the incline version puts your shoulders in a lower degree of flexion than the standing rope French press, which in turn puts less pressure on your rotator cuffs.

Of course, using any kind of bench makes the setup a bit harder because you have to walk out with the attachment in your hands and then sit on the bench, which is quite an ab-intensive activity.

The other option is to use a mid-pulley position and then simply reach back to grab the rope/bar while you’re sat down. This variation is less strenuous in terms of setup, but—depending on how far the bench is from the pulley—it also provides a subpar triceps stretch because the cables don’t have to travel as far.

Doing the decline French press with cables creates a powerful peak contraction in your triceps because the pulley system is always challenging your muscles with some kind of tension.

Yet, doing the exercise on a decline bench also puts your triceps at a greater pre-stretch because the slope of the bench encourages your arms to move backward, which in turn activates the long head of the triceps more (the only triceps head that acts on the shoulder joint).

The only downside is that, unless you have a decline bench with foot holders, the exercise can be impractical when you’re lifting heavy because it requires significant ab strength to prevent your torso from sliding down the bench.

The lying cable French press is easier to set up than the decline version because you don’t need a special kind of bench. Nor do you need to elevate your bench on a step-up platform.

Using a flat bench in conjunction with a low pulley will most likely enable you to reach back to grab your attachment of choice while you’re lying down. This means that you won’t need to waste any energy getting the bar or rope into position.

Plus, having to lift the attachment off the floor ensures that you’re only lifting weights that your triceps can truly handle.

You also can’t bend your knees or back to cheat the weight up when you’re lying on a bench, so although not as popular as the standing cable French press, the lying version is undoubtedly one of the better exercises for maintaining the proper form.

The v-bar cable French press is exactly the same as the low pulley French rope press in terms of the lifting technique; the difference is that the rope French press produces a more potent peak contraction because you can “split” the end of the rope in order to make your triceps contract harder.

While using a v-bar does place your wrists in a semi-pronated position, it also forces you into using a very narrow grip, which could strain your wrists if you’re challenging your triceps with heavy weights.

Using a rope attachment, on the other hand, gives your wrists more freedom of movement and also forces you to lockout each side of the rope separately, which in turn encourages the development of symmetrical triceps.

While the rope attachment provides your triceps with the best stimulation on a per-rep basis, it’s the bar attachments (straight and curved) that enable you to lift the most amount of weight and thereby place the greatest overload on your triceps.

This is because ropes are more challenging to stabilize than bars since ropes have two separate sides, each of which you need to balance. With a bar, on the other hand, you only need to focus on stabilizing one object, which in turn allows you to lift heavier weights.

The curved bars are more comfortable to hold because they have semi-pronated grips. However, straight bar attachments are much more common in commercial gyms, so they might be your only option.

The high cable French press is easier to set up than the low pulley French press because—depending on the length of the cables—all you have to do is reach up to grab the attachment.

Of course, if you’re using a taller cable machine, then you’ll likely have to stand up to grab the bar or rope, but it’s still easier than reaching down to grab an attachment and then swinging it over your head.

The trade-off is that doing a cable French press from a high pulley rather than a mid or low pulley reduces the eccentric muscle stretch that your triceps get put under.

Considering that the deep, growth-stimulating stretch is the cable French press’ primary hypertrophic weapon, you should avoid the high pulley cable French press if you want to maximize your triceps development. The exercise is, of course, still okay for getting a quick pump.

If you want to build triceps that are both muscular and symmetrical, then make sure to do the cable single arm French press.

Training unilaterally ensures that both of your triceps are receiving roughly equal amounts of work, which in turn helps your upper arms to look more proportional and aesthetic.

The only drawback is that the single arm cable French press takes longer to perform than the two-arm version because you’re training each arm separately. Is this extra training time worth the enhanced triceps symmetry?

If you already have decent triceps development, then I’d say yes. But if you’re a novice lifter, I’d say no because you won’t yet have the muscle mass to make any symmetry improvement noticeable.

The cable French press is an underrated tricep-builder and one which has a lot more exercise variations than most people think.

If you go for the cable rope French press, then your best bet is to position a pulley at around waist height so that you don’t have to expend as much energy getting the rope into position.

Using a bench, either in an upright or flat position, will reduce the core stability requirement of the exercise. However, getting a bench and a cable station in a busy gym is much easier said than done and often isn’t worth the effort.

For this reason, most lifters are best off performing the standing cable French press with a rope because it’s a high performer across all categories: ease of setup, conduciveness to heavy lifting, range of motion, and triceps activation.