Learn how to do a one arm French press with the correct technique. 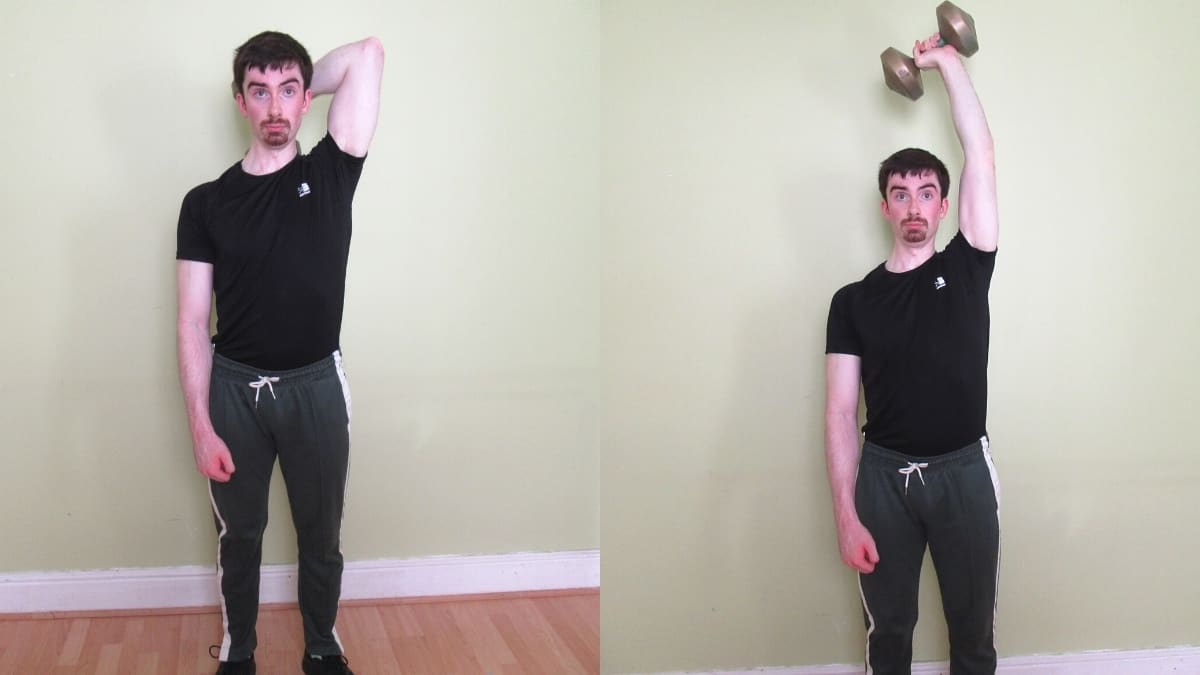 The French curl is one such exercise.

Since it places your shoulders in flexion (i.e., it puts your arms in an overhead position), the single arm dumbbell French press taxes your triceps with an intense, growth-producing eccentric stretch.

While the single arm French press trains all three tricep heads, it targets the long head to a greater degree than the lateral and medial heads because the long head, which is the biggest muscle in the triceps, is the only head that acts on the shoulder joint.

As such, when you place your arms in an overhead position, like in a one arm French press, the long head becomes more active and is thus able to produce maximum force so that you can overload your triceps with heavy mechanical tension to make them grow.

How to do a single arm French press

Note that the general form guidance applies to both the standing and seated single arm French press.

Not only are you training each arm separately to maximize your mind-muscle connection, but by sitting with your back braced against the pad, you also don’t have to put as much effort into stabilizing your core, which further enhances your ability to contract and stretch your triceps.

The seated barbell French press is a similar exercise in that it doesn’t force you to work your abs at the expense of your triceps. However, since you’re using a bar, you’re also leaving yourself open to the development of tricep size asymmetries, which can really harm the aesthetics of your physique.

With the seated single arm French press, on the other hand, you can train one arm at a time to ensure that both of your triceps get equal amounts of work. Building even triceps helps you to prevent the bar from becoming lopsided during your compound presses, which further equalizes your triceps development.

Just make sure to use a bench with a backrest for the seated one arm French press. The perk of the seated one arm dumbbell French press is that it requires less core stabilization than the standing version. So if you use a bench without a backrest, then all you’re doing is reducing your calorie expenditure (standing exercises burn more calories than seated exercises) without actually making the movement anymore conducive to triceps isolation.

How effective is the one arm French press?

The one arm French press is an effective exercise for reducing and, with time, even eliminating your noticeable muscular imbalances.

Likewise, even if you don’t have muscle imbalances now, the unilateral French press is still a good insurance policy against future tricep asymmetries because it’s an exercise that encourages your triceps to grow in proportion.

The only drawback of the single arm DB french press is that it adds time to your workout because you’re training each arm separately. Therefore, if you’re short on training time, then you’re probably better off performing isolateral exercises like the decline dumbbell French press, or, if you want to work your core as well, the exercise ball French press or the half kneeling French press.

An isolateral exercise is a movement in which you train each side of your body independently but not separately. So while you won’t quite have that uninterrupted mind-muscle connection when you do a French press with kettlebells (because you’re training both triceps together), such exercises are still a time-efficient way to ensure that your triceps are growing roughly in proportion.

If you want to challenge your triceps with constant tension, which is a type of resistance that the single arm French press doesn’t provide, then you can do a low pulley cable rope French press instead.

Since triceps isolation is the primary purpose of a single arm French press, your best bet is to perform moderate or high reps so that you don’t hinder your ability to establish a strong mind-muscle connection.

If you’re training more frequently, then do fewer sets per workout. Conversely, if you’re only doing the single arm dumbbell French press once a week, then you’ll want to do 4-5 sets in that session.

French presses of all kinds can be quite elbow-intensive, so it's best to perform them no more than twice per week.

Since you’re not lifting that much weight during a one arm French press, the exercise can be performed more frequently than other tricep movements without much detriment to your connective tissue recovery.

Nevertheless, the one arm French press is still a single-joint exercise and, as such, can be quite elbow-intensive. So it’s best to start with one or two weekly sessions and then—optionally—work your way up to higher training frequencies once you’ve established that you can recover from a baseline amount of volume (i.e., 3-5 sets per week).

If you’re doing a French press with resistance bands, on the other hand, then you could get away with higher training frequencies because bands are typically a bit more joint-friendly than free weights, and they also cause less muscle damage.

The single arm French press promotes the development of proportional triceps by enabling you to train each arm separately. Although this unilateral training style tacks on extra time to your workout, performing the additional sets will likely be worth the symmetry improvements if you’ve got a noticeable size disparity between your upper arms.

Make sure to lift with a controlled rep tempo over a complete range of motion (a deep triceps stretch followed by a full elbow extension) to get the most from the one arm French press. Feeling your triceps do the work is much more important than lifting maximal weight because the single arm dumbbell French press is a pure isolation exercise, so save the mega heavy lifting for your compound presses.