How to do a seated French press with a barbell 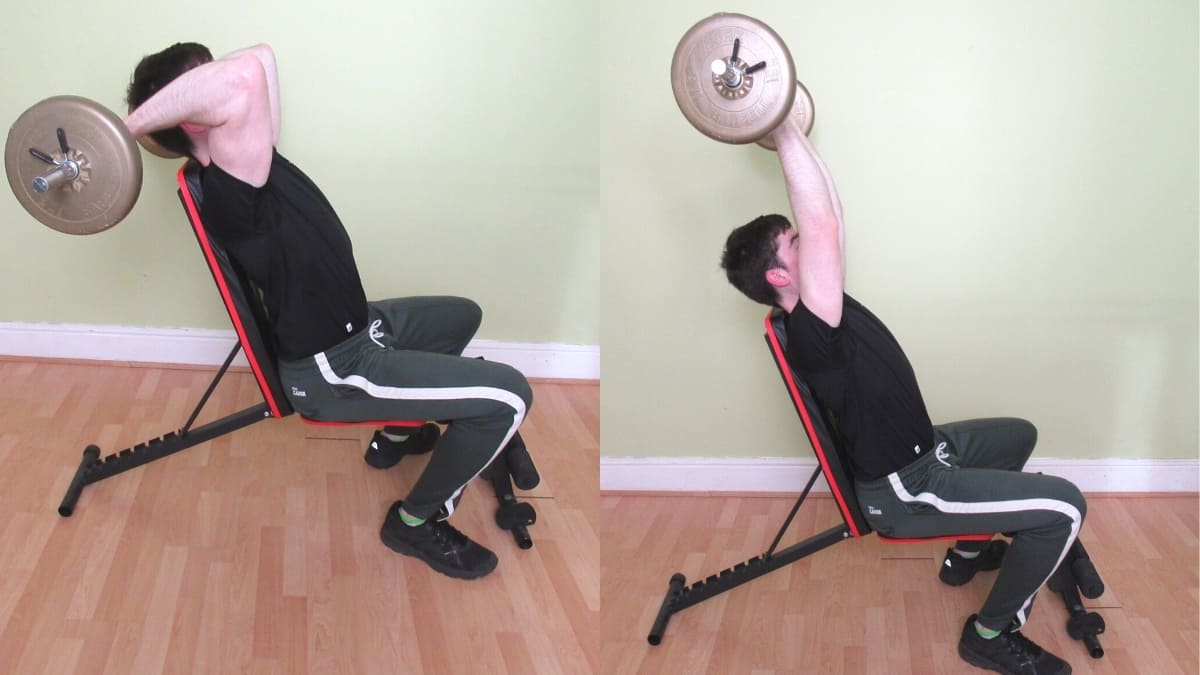 As we explained in our triceps anatomy guide, the triceps brachii has two functions—elbow extension and shoulder extension—both of which you need to train in order to get the best results.

In practice, maximizing your triceps development involves performing some kind of overhead movement like the standing French press so that you can put the largest head of the triceps, namely, the long head, under a growth-provoking stretch.

This tutorial demonstrates the proper seated French press form and then discusses the advantages of the exercise when it comes to gaining strength and size. After learning the correct lifting technique for this underrated movement, you’ll have a potent hypertrophic weapon in your muscle-building arsenal that you can perform to add mass to your arms.

How to do a seated barbell French press

The seated barbell French press has some excellent muscle-building advantages when performed correctly, some of which you probably haven’t even considered.

It improves your mind-muscle connection

Performing a seated French press enables you to establish a stronger mind-muscle connection with your triceps because you don’t have to put as much effort into bracing your core when your torso is stabilized by the bench’s back pad.

Although the standing version burns more calories due to involving your legs and core muscles in the movement, it also requires far more abdominal exertion than the seated BB French press, which in turn makes it harder to focus on training your triceps.

So, for maximizing muscle hypertrophy, the pronated seated French press is the way to go because it requires less core stabilization.

Being able to focus purely on training your triceps also helps you to maintain the optimal muscle-building form because you won’t get distracted now that the backrest of the bench takes care of the stabilization.

Unlike the average tricep training drill, however, the barbell seated French press emphasizes the long head of the triceps (the biggest head) by placing your shoulders into flexion, which is to say by putting your arms in an overhead position.

This overhead positioning places the long head in its most powerful force-producing position and, therefore, dramatically intensifies the eccentric muscle stretch, which in turn leads to triceps hypertrophy.

Just make sure that your elbows are parallel to the ground during the seated triceps French press. This way, you know that your shoulders are in maximum flexion and thus in the prime position to unlock the full strength of your triceps.

It strengthens your compound presses

Everybody wants to bench big numbers, but nobody wants to do seated French presses to increase their lockout strength.

A sitting French press, after all, is essentially just an elbow lockout perform exclusively with the triceps.

In this regard, the seated barbell French press closely mimics the final phase of a bench press rep, which is handled primarily by the triceps.

That’s how the French press carries over to your compound presses from a technique perspective.

In other words, the bigger your triceps are, the more potential they have for strength. This is ultimately why isolation exercises like the seated BB French press are a must-do, even if you don’t train for aesthetics.

The seated French press as an exercise concept (if that is the right word) is compatible with any training tool that you can safely lower behind your head while you’re sat down.

Considering that straight bar exercises force your wrists into full pronation—practically the only downside of the seated barbell French press—it might be worth looking into alternatives if you can’t do the sitting French press pain-free.

After all, just because you find one particular variation of an exercise uncomfortable doesn’t mean that the other versions will cause problems.

With that in mind, here are full guides to every other type of seated French curl (note that the seated version of each exercise might be in a subsection within the article).

Conclusion: Should you do the sitting French press?

If you want to make sure that you’re not training your abs at the expense of your triceps, then the seated French press is an excellent exercise to include in your workout routine.

Since the bench’s back pad performs most of the crucial stabilization work, you can dedicate virtually all of your attention and energy toward blasting your triceps and making sure that they’re thoroughly stimulated.

Stick to sets of 10-15 reps most of the time and do 3-5 sets 1-3 times per week. As mentioned in other articles, you can perform the seated French press for lower reps because the triceps is a fast-twitch muscle group. However, because the French press is a single-joint exercise and thereby fairly elbow-intensive, it’s best to do it for moderate to high reps and reserve the really heavy lifting for your compound presses.