How to do a decline French press

Learn how to do 3 decline French press variations with the optimal form. 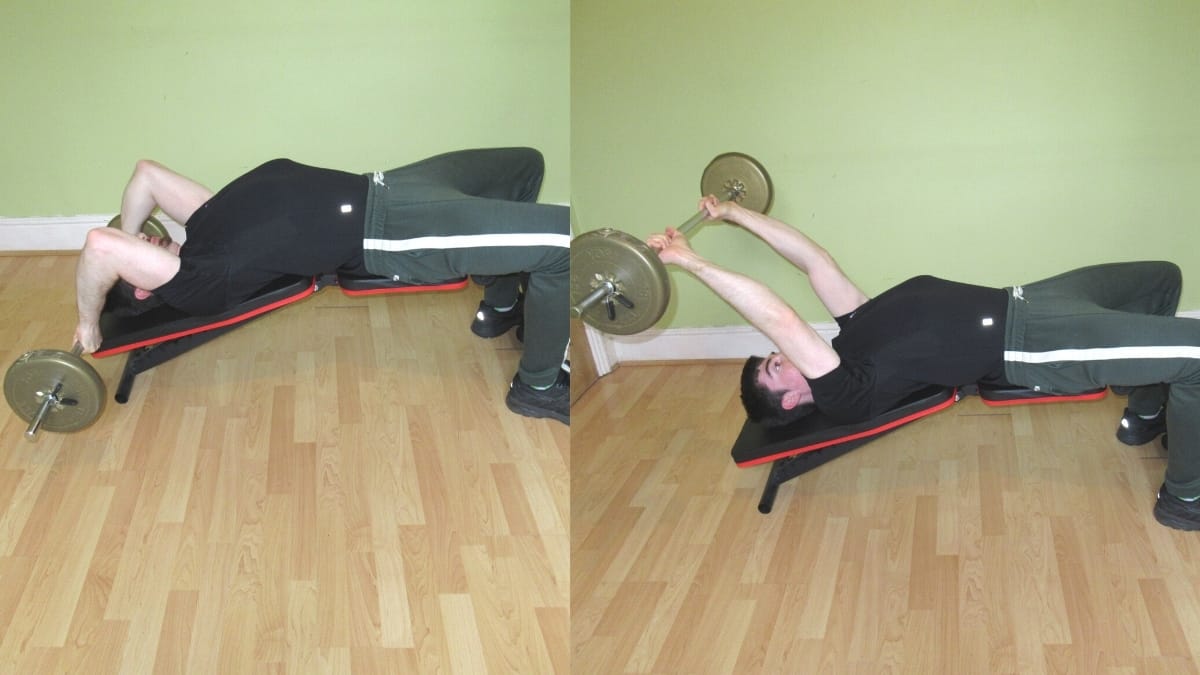 The decline French press trains both functions of the triceps (elbow extension and shoulder extension) simultaneously to deliver an extremely potent hypertrophic stimulus.

If your bench doesn’t have foot holders, then you’ll need to forcefully flex your abs to prevent your body from sliding down the bench, which may impair your ability to establish a strong mind-muscle connection with your triceps.

How to do a decline French press

In addition to the rope French press and the KB French press, both of which can be performed on a decline bench, there are two other mass-building French presses that you can do with your bench positioned at a decline angle.

Performing a decline lying dumbbell French press enables you to make sure that both of your triceps are getting trained equally because you have to lift two independent weights.

The trade-off is that you can’t lift as much weight with dumbbells as you can with a barbell because stabilizing two separate weights is harder than balancing one bar.

This reduced resistance means that, given the same quality of form, you won’t be putting your triceps under as much tension during the decline dumbbell French press as you will be during the barbell version.

Training one arm at a time enables you to establish a powerful mind-muscle connection with your triceps, which in turn helps you to correct your muscular imbalances by giving your weaker arm individual attention.

The drawback, of course, is that unilateral exercises like this take longer to perform because you’re effectively doubling the number of sets when you train one arm at a time.

See our one arm French press guide for more information on this.

If you’re not yet sure whether the decline French press is the right exercise for your training goals, learning the pros and cons of the movement should help you to decide.

When you perform any kind of exercise on a decline bench, the weight always has a tendency to pull your body backward due to the slope of the bench.

In the case of the decline French press, this sloping bench angle means that your triceps have to contract harder to lock the weights out, which in turn leads to a stronger peak contraction and a more potent pump.

Additionally, during the eccentric portion of the rep, the long head of the triceps, which is the only head that’s influenced by your shoulder position, gets put under a deep stretch because, due to the decline angle, the weights naturally pull your arms further behind your head.

This heavy weighted stretch breaks down the muscle fibers and encourages your triceps to grow back bigger and stronger so that they can handle the strenuous tension.

Unless your bench has foot holders, the decline French press requires a lot of core stability in order to prevent your body from sliding down the bench.

This is actually a good thing if you want to sneak in some extra ab stimulation while you’re training your triceps. However, for the majority of lifters, who’re presumably doing the decline French press with triceps hypertrophy in their mind, the extra core stability could detract from their ability to feel their triceps working, which ultimately defeats the point of this isolation exercise.

Of course, if you’re lifting relatively light weights, then core stability is unlikely to be an issue. But if your triceps are really strong, then make sure that your feet are, if not in some kind of foot holder, at the very least planted firmly on the floor so that you have a solid base to lift from.

In addition to the decline barbell and decline EZ bar French press, you can get similar results from doing a decline banded French press, which is useful for those without access to free weights.

So just because you don’t have a particular training tool doesn’t mean that you can’t take advantage of a great exercise like the decline bench French press. Any kind of weight or piece of gym equipment that you can hold securely in your hands is compatible with this underrated exercise.

The same is true for the incline barbell French press; you can do it with kettlebells, dumbbells, bands, and more.

If you want to put your triceps under a tremendous stretch and then pump them up with a potent peak contraction, the decline French press is a great exercise because, unlike many free weight exercises, it provides relatively consistent tension levels throughout the entire duration of each rep.

This is because your triceps are always doing some kind of lifting when you perform the French press on a decline bench. Even when your elbows are fully extended, your triceps can’t just rest because the backward pulling force of the weight (due to the bench’s decline angle) is always trying to break that locked-out elbow position.