Learn how to do an incline French press with the proper muscle-building form. 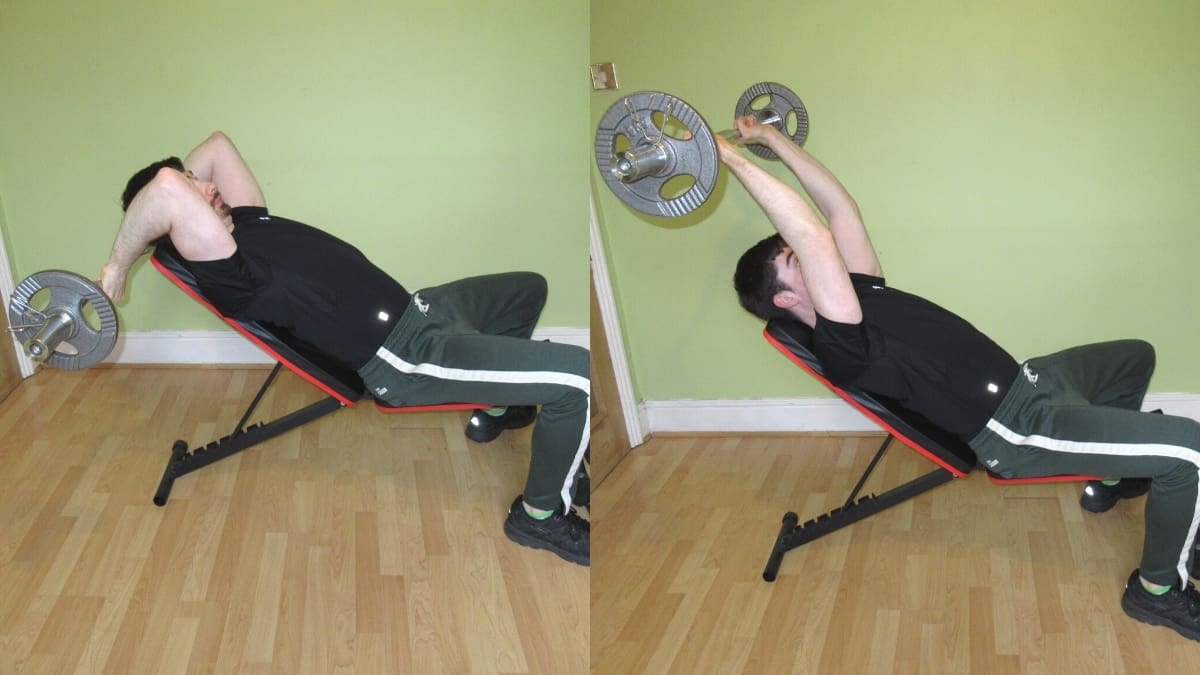 The incline French press exercise is a mass-builder in the most literal sense of the term. By encouraging you to bring the bar behind your head rather than merely lowering the weight to your face, a correctly performed incline French press automatically places the biggest muscle in the triceps, namely, the long head, under a much intensified eccentric stretch.

This growth-provoking muscle stretch challenges your triceps in their strongest force-producing position, which naturally means that you can lift heavy, fiber-tearing weights during the incline EZ bar French press.

The following guide explains how to do an EZ bar incline French press with the proper form and then shows you 3 more variations that you can do on an incline bench. After that, we’ll take a deep dive into the optimal number of incline French press reps and sets for stimulating hypertrophy and triceps strength development.

How to do an incline French press for your triceps

The incline dumbbell French press is an excellent exercise if you want to build triceps size but are willing to take a small hit in the amount of weight that you can lift in order to sculpt more symmetry.

Since you have to lift each weight independently during an incline DB French press, your stronger triceps muscle can’t dominate the movement, which means that your triceps receive roughly equal amounts of stimulation, which in turn encourages them to grow in proportion.

Using dumbbells for an incline French press also puts less pressure on your wrists than using a bar because you can hold the weights with a neutral grip. Such a grip allows you to gain strength unimpeded by joint discomfort, which in turn enables you to establish a better mind-muscle connection with your triceps, which ultimately leads to more hypertrophy.

The downside of the dumbbell incline French press is that you have to lift less weight. This is simply because it’s harder to balance two independent weights than it is to stabilize one bar.

So while you won’t be able to overload your triceps with as much resistance during the incline dumbbell French press, you will be strengthening your stabilizer muscles and improving your triceps symmetry.

The incline barbell French press is one of the main incline French press variations that lifters gravitate toward because the exercise enables you to lift heavy and break down your tricep muscle fibers with growth-stimulating mechanical tension.

The trade-off of being able to lift maximal weights, however, is twofold.

First off, using a barbell for a French press can often lead to tricep size asymmetries because your stronger arm is likely to dominate the movement. You can remedy this problem to an extent by doing a French press in front of a mirror. But this isn’t always possible when you’re using an incline bench because when you’re not upright, you can’t monitor your lifting technique as effectively.

Second, using a straight bar forces you into lifting with a maximally pronated grip, which can often cause wrist strain as the weights become heavier due to your increasing triceps strength.

Using an EZ bar for the incline French press is a much better option than using a straight bar because EZ bars have semi-pronated grips. These handles are much more comfortable to hold than those of straight bars because they place your wrists in a natural position, which ultimately enables you to increase the weight without worrying about whether your wrists can keep up with the strength of your triceps.

Performing the seated dumbbell single arm French press on an incline bench places your triceps in a powerful position by putting them under a deep eccentric stretch. Due to the heavy mechanical tension exerted by the dumbbell, this weighted stretch tears down your muscle fibers and stimulates hypertrophy.

But because you’re doing the exercise in a unilateral fashion, the single arm incline French press is virtually unrivaled when it comes to building triceps that are not just big but proportional too.

Training each arm separately lets you establish a stronger mind-muscle connection with both of your triceps in order to reduce your asymmetries and sculpt a symmetrical pair of upper arms.

The only downside (depending on your enthusiasm for strength training) is that your workouts will take longer when you train one arm at a time. While you won’t need to rest between sets for different arms, you’ll still be doing twice the number of total sets during a one arm incline French press exercise.

What muscles does an incline French press work?

An incline bench French press works all three tricep heads—the long head, the lateral head, and the medial head—via elbow extension, which is the primary function of the triceps brachii.

However, because incline French presses place your shoulders into flexion, the exercise trains the second triceps function—shoulder extension—by placing the long head under an intense stretch.

Since the long head is the largest muscle of the triceps and the only one that acts on the shoulder joint, it naturally does most of the lifting when your arms are in an overhead position, which is ultimately why the incline French press has such noteworthy mass-building potential.

Yes, the incline EZ bar French press and its variations are all excellent for building upper arm mass because they train all three tricep heads (the triceps as a whole account for two-thirds of your arm size).

While the incline dumbbell French press is the best choice for developing triceps symmetry, using an EZ bar is the better choice for building mass because it enables you to overload your triceps with more resistance. All else being equal, lifting heavier weights with good form leads to more hypertrophy.

Additionally, because you’re lying with your back against the bench’s pad, you don’t have to put as much energy into stabilizing your core (the backrest basically does it for you). This reduced ab exertion helps you to focus on training your triceps, which, after all, is the primary purpose of this isolation exercise. It’s a similar story with the decline French press (if you have a bench with foot holders).

Of course, to gain any appreciable muscle mass and make your effort in the gym apparent in your physique, you have to train consistently and consume an appropriate, high-protein diet. But in terms of stimulating hypertrophy, the incline French press is an excellent mass-building movement to include in your routine.

How many reps and sets should you do?

As a general recommendation, do between 3-5 sets of 8-15 reps per workout.

Moderate reps are recommended because they offer the perfect balance between mass-building mechanical tension and joint-friendly resistance.

High reps work as well, but they cause a lot of fatigue, which in turn decreases the quality of your subsequent sets.

Likewise, lifting heavy weights for low reps certainly leads to muscle growth. However, these initial short-term gains often come at the expense of your joint health, which ultimately leads to you having to reduce the resistance so that your elbows can keep up with your triceps.

For these reasons, moderate reps are your best bet for elbow-intensive exercises like the incline bench French press.

If you want to build your triceps and increase your pressing power and arm size as a result, then the incline French press is an excellent exercise to include in your training program.

Unlike the standing version of the exercise, the EZ incline French press has a very low core stability requirement because the bench’s back pad essentially stabilizes your torso for you. As such, you can put more effort into training your triceps because you don’t have to contract your abs as hard when you’re lying on an incline bench.