Learn how switching to the dumbbell side curl can level up your biceps long head. 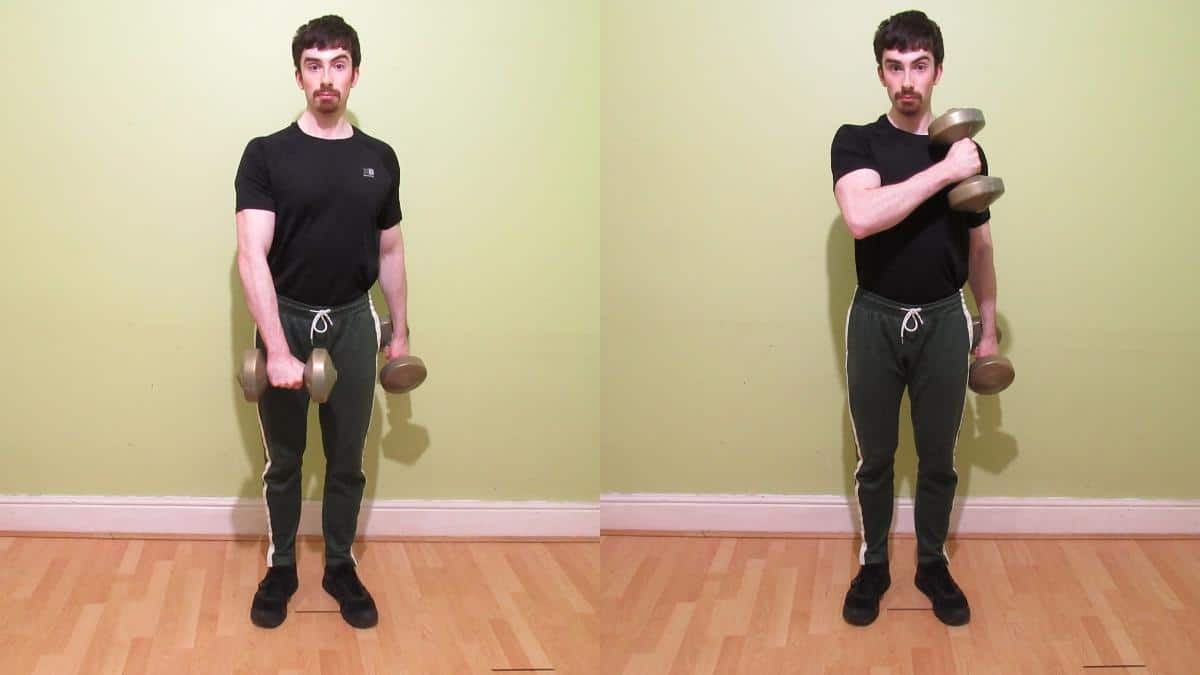 The cross body hammer curl can significantly improve your biceps muscle size because the unilateral nature of the exercise lets you focus on working one arm at a time. Because of this, you can also lift more weight than on a regular hammer curl since you don't have to split your focus in two directions.

However, in order to get these muscle-building benefits, you have to perform cross body curls with a) the proper form, and b) with enough training volume to stimulate hypertrophy.

How to do cross-body hammer curls correctly

Cross-body hammer curls are actually easier to perform than regular hammer curls because you only need to focus on training one arm at a time. However, the fact that many lifters are stronger on the crossbody curl often leads them down the path of ego lifting and other mistakes that can limit bicep development and/or cause injuries.

Swinging the dumbbells up

The cross body curl, also called the pinwheel curl, is an isolation exercise. As such, when you're performing dumbbell exercises for the biceps, you should do everything in your power to keep the tension on the target muscles.

While it's true that you can lift heavier weights by swinging the dumbbells up with momentum provided by your legs and hips, this lifting technique actually results in less bicep stimulation.

Because the extra resistance that you're curling is simply distributed over a wider variety of muscles—the ones that you're using to cheat the dumbbells up. Taken to the extreme, if weight was the most important determinant of muscle growth, then we'd all just be performing deadlifts for our biceps.

But as we know, for a muscle to reach its potential in the shortest amount of time, you generally have to isolate it. This is because you need the muscle to be the limiting factor in at least one exercise so that it gets close enough to muscular failure in order to grow bigger.

So, by all means, lift heavier than you would on regular hammer curls or incline dumbbell hammer curls. But just be sure to keep your elbows and shoulders relatively still so that the tension stays firmly on your biceps, brachialis, and brachioradialis.

Using a partial range of motion

Partial reps can indeed build muscle. However, by shortcutting the range of motion, you're naturally missing out on either the stretch or contraction part of the rep.

Both of these repetition components are important for muscle growth because they result in a dynamic contraction (where a muscle is stretched and contracted), which is generally seen as superior to both eccentric-only and concentric-only contractions. [1]

So make sure to really squeeze your arm at the top of every cross body bicep curl rep. Then, as you lower the weight, think about your biceps stretching out, not just letting the dumbbells drop. And for bonus points, flex your triceps at the very bottom of the rep so that your biceps are fully lengthened.

Lifting both dumbbells together

Curling both dumbbells together during cross body hammer curls is, quite frankly, a recipe for disaster. Not only will the dumbbells get in the way of each other, but you'll also have to lighten the weight because now you have to focus on working both arms simultaneously.

Moreover, since your focus is divided, there's an increased chance of you lifting with sloppy form.

Similarly, when performing this exercise correctly, which is to say unilaterally, don't begin the rep with your other arm until your initial rep is completely finished. This way, you can be sure that you're getting a full range of motion for each arm.

Of course, you can also do regular alternate hammer curls if you want to overload your brachioradialis muscles with more weight.

The cross body dumbbell curl may not be as popular as the standard hammer curl, but that doesn't mean that it's any less effective for building arms of steel. Here are the benefits that you can look forward to when you lift with the proper form.

Traditional hammer curls typically emphasize the brachioradialis over the biceps. This is great if you're in the pursuit of thicker forearms, but sometimes you just want to focus on your upper arms.

The crossbody hammer curl is one of the best dumbbell curls in this regard, because by turning your arm inwards, you're placing more tension on the long (outer) head of your biceps, which is the head that most people need to develop—and also the head that's responsible for developing those coveted peaked biceps.

Since you can lift heavier weight and thereby do more training volume on pinwheel curls (aka cross-body hammer curls), your biceps will naturally gain strength faster. [2]

Besides overloading the muscles with higher resistance levels and thus potentially stimulating faster hypertrophy, the increased strength will also carry over to your other outer bicep workouts so that you can lift heavier weights across the board.

The dumbbell cross body curl is sometimes called the chest curl because you have to lift the weights across your torso rather than straight out in front of you. But lifting technique isn't the only difference between these two exercises.

This quick cross body hammer curl vs hammer curl comparison will help you learn which variation is best for your goals. Of course, you can perform both movements in your workout. But whichever exercise you decide to be the most important is the one that you should perform first.

Read More: How to get more defined biceps

The verdict: Are cross body curls worth doing for bicep development?

The cross body hammer curl is a brilliant bicep-building exercise when you perform it with the correct technique. Unlike regular curls, this exercise is more effective for developing a stronger mind-muscle connection because you only need to focus on working one arm at a time.

Cross body curls also enable you to lift more weight than regular hammer curls because 1) less core stability is required, and 2) your focus isn't split over two sides of your body.

That said, since cross body hammer curls emphasize your biceps at the expense of your brachioradialis, it's probably worth your while to do regular hammer curls as well if you want to thicken up your forearms as well as your biceps and brachialis.