How to do every type of resistance band French press

Learn how to do all 8 resistance band French press variations. 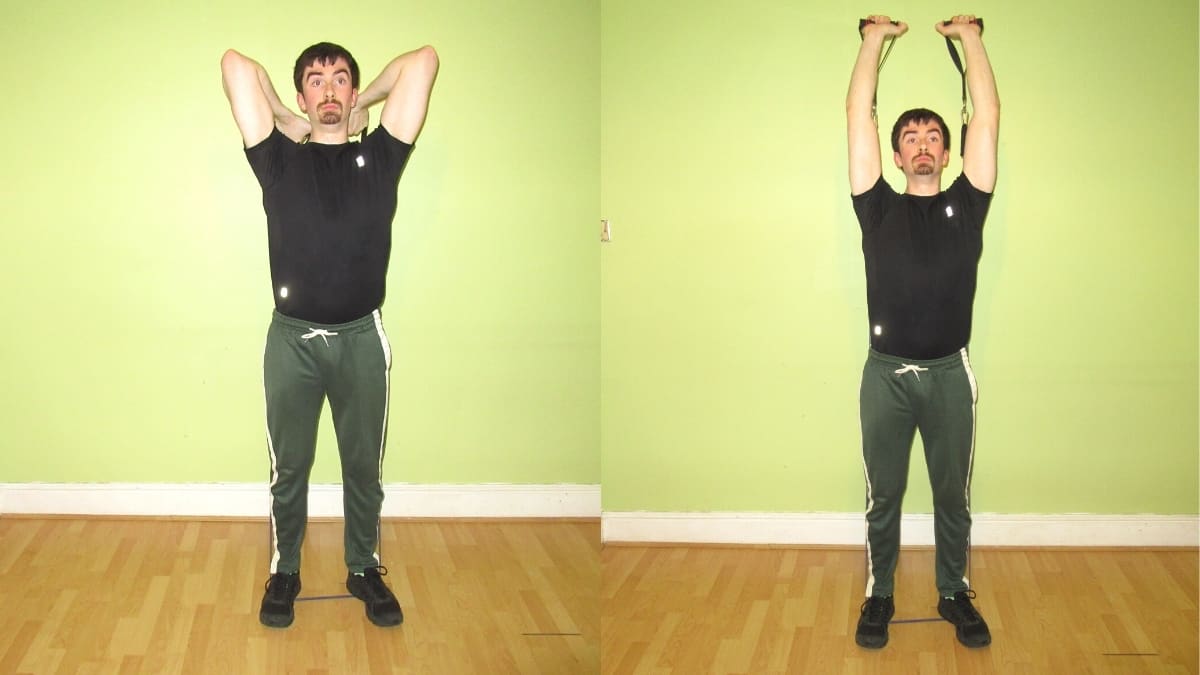 Learning how your triceps brachii functions enables you to achieve better results from your workout efforts because having a knowledge of basic upper arm anatomy enables you to select exercises that have a proven track record of building the triceps.

The French press lifting exercise is one such movement.

The French press works all three heads of the triceps well. But it works the largest tricep head—the long head—excellently.

This is because the banded French press puts your shoulders into flexion. And since only the long head of the triceps crosses the shoulder joint, that’s the muscle that performs most of the lifting when your arms are in an overhead position.

This guide shows you how to do 8 types of resistance band French presses so that you can train your triceps from every conceivable angle.

How to do a French press with resistance bands

Here are 7 more banded French press variations that you can do to challenge your triceps while adding variety to your workout program.

This done-for-you-stabilization means that you don’t need to brace your abs as hard, which in turn means that you can put more energy and focus into training your triceps.

Although the sitting French press doesn’t burn as many calories as the standing version (because your legs and core muscles aren’t as active when you’re sat down), this lack of energy expenditure is actually a good thing if you’re trying to bulk up because it’ll help you to remain in a calorie surplus.

Since you’ll need to anchor your band at a low height in order to achieve a proper triceps stretch during the eccentric phase of the rep, the setup for the seated band French press can be a little tricky—you’ll have to walk the bands out to the bench and then sit down, which is quite an ab-intensive activity when you’re using heavy bands.

This means that the incline resistance band French press requires a bit less shoulder mobility than the standing version (because your shoulders won’t be in as high a degree of flexion) but more than the lying variation.

As such, this tricep-taxing movement is ideal for those who struggle to get their arms all the way over their heads during the standing banded French press but who still want to challenge their triceps with an intense eccentric muscle stretch.

You will, of course, need an incline bench for this exercise, so it’s likely not ideal for those training at home. Nevertheless, you could probably mimic the banded incline French press (certainty the seated/upright version) by using a chair or a sofa as your workout bench.

Yet, the decline banded French press provides an incredibly intense peak contraction and, as such, is actually more challenging than the other types of band French press because your triceps have to work overtime to lock the bands out.

Like the decline barbell French press, the setup for the decline resistance band French press is pretty straightforward because you can just reach back to grab the handles. The benefit of this is twofold because, since you’re starting from a concentric rep, you’re naturally restricted to a sensible amount of weight that you can lift with good form.

In other words, you can’t just lower the bands halfway and then lift them back up because, in the decline band French press, you have to lift the bands before you can lower them.

The lying resistance band French press is strikingly similar to the decline version in terms of setup and lifting technique.

In fact, the only difference is the bench angle.

Using a flat bench requires less core strength (unless your decline bench has foot holders) because you don’t need to contract your abs in order to prevent your body from sliding down the bench.

But what if you’re training at home and don’t have any kind of weight bench?

In that case, check out the next exercise that I’m about to show you.

The floor resistance band French press is virtually identical to the flat bench variation. The only difference, of course, is that you only need bands (and ideally an exercise mat) for this bench-free French press variation.

Since you can just reach back to grab the bands from a lying position, the floor resistance band French press is naturally an accessible exercise that doesn’t have an overly strenuous setup.

Because you don’t have to walk the bands out to any kind of bench, you’re able to conserve energy and thus train your triceps harder during your working sets.

While you can perform the exercise from a high “pulley” (as you can with the other variations), a low anchor point is most recommended because a) the setup is easier and b) you won’t work your abs at the expense of your triceps when you use a low pulley.

On the other hand, if you do want to train your core while working your abs, then the resistance band tall kneeling French press is the way to go.

Although you won’t be able to use massively heavy bands (unless you have a rock-solid core), the kneeling resistance band French press is a highly functional exercise that has excellent carryover to ab-intensive compound exercises.

While you can do the resistance band kneeling French press in a half-kneeling position for more stabilization, your best bet is to stick with the tall kneeling position if you want to take full advantage of the isometric abdominal stimulation that this exercise provides.

If you want to completely isolate your triceps, then do one of the seated or lying variations instead.

The resistance band single arm French press is the best choice for improving your upper arm symmetry because it ensures that both of your triceps are getting roughly equal amounts of work.

The trade-off for helping to correct your muscular imbalances is that the one arm resistance band French press demands more of your time; your sets will take longer to perform because you’re training each arm separately.

While most lifters perform the single arm resistance band French press in a standing position so that the band has to travel further (the more stretched the band, the more tension it exerts on your triceps), you can also do the exercise in a seated position in the unlikely event that you find the standing version to be too ab-intensive.

Conclusion: Should you do the French press with bands or not?

While free weights may seem like the obvious training tool for the triceps, resistance bands can be equally effective when you lift with the proper form.

Unlike its free-weight counterparts, the banded French press provides constant, if slightly inconsistent, tension. Although it’s true that certain parts of a resistance band French press are harder than others (because the band is more or less stretched during certain phases of the rep), the tension levels are still challenging throughout the entire duration of the set.

This consistent resistance makes sure that your muscles, rather than your joints, are taking the brunt of the load, which in turn results in a great triceps pump because your muscles don’t get a chance to rest until the set is over.