We reveal the top 7 resistance band bicep exercises after trying more than 15. 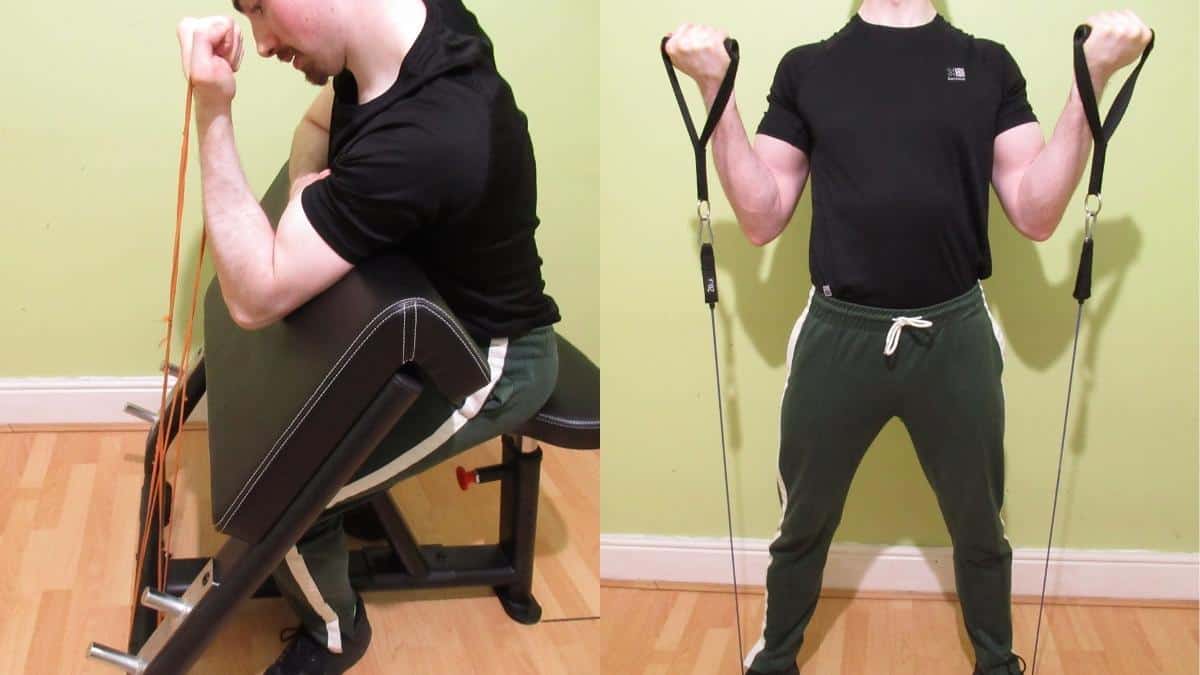 This training guide provides a selection of the most effective resistance band bicep workout routines that you can perform to get in shape. So whether you want to build slabs of mass or sculpt a more slender and toned physique, you'll definitely find the right program to develop your bicep brachii.

In addition to full workouts that you can perform anywhere, you'll also find our list of the top 7 best resistance band bicep exercises for hypertrophy.

These bicep band exercises are convenient yet highly effective for achieving muscular arms. Only one of the movements uses extra equipment (and even then, it's optional); the rest you can perform absolutely anywhere.

Performing bicep curls with resistance bands couldn't be simpler. All you need to get those bicep gains is a band with handles and a tiny amount of workout space.

The exercise is also highly versatile because you can increase or decrease the band tension on the fly without messing around with cumbersome weight plates or even swapping the band. For example, if you shift your feet away from the middle of the band toward the ends, you'll pull the slack out of the band and make it heavier.

Similarly, if you stand right in the center of the band, then you'll still get a great bicep contraction, but there will be less tension during the initial part of the repetition, where you haven't yet had a chance to pull the slack out of the band.

Resistance band drag curls make a great addition to any bicep band workout because they target the long head of the biceps, which is an area that many lifters want to improve seeing as developing it can result in a more prominent bicep peak.

The reason for the long head emphasis is that you're curling with your elbows behind your torso. This positioning biomechanically shifts more of the tension onto the outer muscle fibers of your biceps because only the long head crosses the shoulder joint.

Just make sure that you don't cheat by shrugging the band up. While it's okay to feel a moderate amount of trap activation due to the fact that you're performing somewhat of a rowing motion with your elbows, you should still feel the majority of the tension in your biceps.

A quick pro-tip in this regard is to think about moving your forearms toward your biceps while simultaneously dragging your elbows backward.

While the resistance band reverse curl may well be a brachioradialis-first, biceps-second movement, it's no less effective for developing aesthetic arms.

Reverse curls are, in fact, one of the most effective resistance band biceps exercises that you can do because they train the two arm muscles that most lifters neglect, namely, the brachialis and the brachioradialis.

Both of these muscles are powerful elbow flexors, each of which becomes more active when you place the biceps in a position of mechanical disadvantage (i.e., when you curl with a pronated grip).

Believe it or not, you can do preacher curls with resistance bands, and you don't even need a preacher bench!

The only requirements are a band with handles and a place to attach it. For most of us, this means attaching our band to a door anchor, which is widely available with many resistance band sets, and then looping the anchor under the door.

While this particular bicep band workout doesn't have you lift in the usual preacher curl position, the feel of the exercise is exactly the same (if not better) because you're bracing your elbows against your knees, which essentially mimics a preacher pad.

If you're wondering why the resistance band concentration curl hasn't been mentioned yet, it's because the preacher curl already produces an intense concentration curl-like contraction. There's no need to perform two bicep exercises with bands (especially not within the same workout) that do the exact same thing.

Whenever I do a bicep workout with bands, I always make sure to include spider curls because they create an intense peak contraction that's hard to replicate elsewhere.

There are two ways that you can do spider curls with bands. The first and most straightforward method is to simply mimic the spider curl position by grabbing the bands, bending over at the waist, and then letting your arms hang down and in front of your body. From there, you simply perform the usual curling motion.

The other way is more complicated, but it will make your resistance band biceps workout feel more familiar if you're heavily accustomed to training with free weights. This is the method you're going to learn now.

You can also do a resistance band incline curl by sitting on the bench in a regular position, which, contrary to the short head-focused spider curl, places more tension on the long (outer) head of your biceps.

If you're doing bicep workouts with bands but still want to train your brachialis and brachioradialis muscles as well, then you should definitely perform Zottman curls with resistance bands.

This movement is an excellent mass-builder because you're using the combined strength of all your arm muscles during the concentric to overload your brachialis and brachioradialis with extra resistance—more than they could handle on reverse curls—during the eccentric phase of the rep.

It's recommended to do this exercise with a single resistance band so that you can more easily rotate your hand at the top of the rep.

If you choose to use bands with handles instead, make sure to use a thumbless grip so that you don't obstruct your hand's ability to rotate at the halfway point of the movement.

Resistance band hammer curls absolutely blast your brachialis and brachioradialis and, as such, make a great addition to any bicep resistance band workout.

This is because many lifters already have good biceps but comparatively worse brachialis and brachioradialis development. So any opportunity to improve these often lagging muscles is always a welcomed one.

Again, you can perform this drill with bands that have handles, which will save time since you're training both arms together. However, in order to get a better grip on the band, it's recommended to use a thin resistance band and train each arm separately if possible.

These three routines all cater to slightly different goals. For example, doing the first of these bicep workouts with resistance bands will make your biceps stronger, but its main focus is stimulating maximum muscle growth.

Likewise, the second of the resistance band bicep workouts will still trigger hypertrophy, but it's primarily designed to make your biceps as strong as possible.

And finally, if you just want to get your pump on and get those veins popping, our third band bicep workout will definitely test your lactic acid tolerance.

Conclusion: How to maximize your next bicep resistance band workout

The first step to maximizing your next resistance band bicep workout is to evaluate your goals. Do you want to maximize your muscle growth? Get as strong as on ox?

If making your biceps larger is your primary goal, then our first bicep resistance band workout is the best option because it has plenty of training volume to stimulate new growth. It also includes the most amount of exercises, which means that you'll be recruiting more muscle fibers by working your biceps from different angles.

Our second workout included fewer resistance band bicep exercises so that you can recover faster and thus gain strength quicker. It also makes use of lower reps so that you can get used to handling heavy weight even though you won't actually be lifting anything other than rubber!