How to do resistance band reverse curls

Learn how to pump up your brachialis and brachioradialis with a simple set of bands. 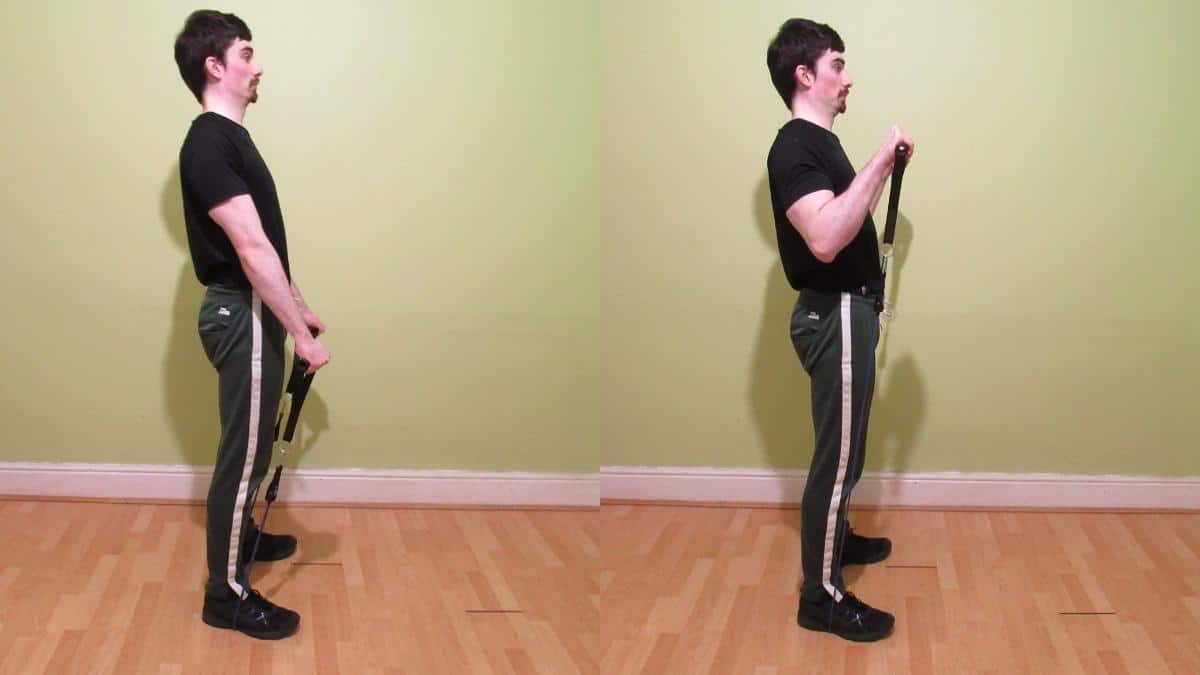 We've spoken about the biceps brachii attachments many times and how the biceps is actually a shoulder flexor, meaning that you can raise your deltoid forward during a banded bicep curl to achieve a stronger muscle contraction.

However, since the objective of a pronated curl is to take the biceps out of the equation, you actually want to keep your elbows and shoulders as still as possible in order to keep the tension on your brachialis and brachioradialis.

So if you already have decent biceps but comparatively weaker brachialis and brachioradialis muscles, then you'll definitely benefit from doing resistance band reverse curls.

Related: Back and bi workout

How to perform reverse curls with resistance bands

If you only have access to a single resistance band, then you can also perform this exercise one arm at a time. Just note that you'll probably need to double loop the band in order to generate enough tension to challenge your muscles if you decide to do it this way.

The great thing about doing bicep exercises with bands is that they're so convenient. It really doesn't matter whether you're in the middle of the weight room or getting your pump on at home; resistance bands always bag you an intense workout.

Since exercises like the kettlebell reverse curl aren't particularly portable due to their need for free weights, performing the exercise with bands is a fantastic alternative if you train at home.

It also means that you don't need to skip sessions if you can't get to the gym for any reason. So rather than sit on the couch all day and lose muscle, you can stay on the gain train by smashing out a quick band workout from the comforts of your living room.

To focus on the peak contraction of your biceps, you can also do resistance band bicep concentration curls by either standing up or sitting on a bench.

For exercises like the EZ bar reverse curl, we always recommend using a full range of motion so that you can stimulate the most amount of muscle fibers possible. However, with the resistance band reverse curl, you're generally performing much higher reps than you would for free weight movements.

As such, it actually makes sense to stop just shy of lockout when you lower the band handles so that you can keep tension on your muscles and generate the most potent pump possible.

Not only does the pump improve the appearance of your arms during training, but it also leads to tangible muscle growth via metabolite accumulation, which is also called metabolic stress.

This makes the banded reverse curl an ideal exercise for those who can't lift heavy due to connective tissue problems. But of course, anyone who wants to get an awesome arm pump can also greatly benefit from doing their reverse curls with bands.

Unless you're a complete beginner, you'll need to use decently heavy resistance bands in order to achieve an effective muscle-building workout.

A good workaround is to double loop your band in order to make it heavier. This completely modifies the strength curve of the exercise so that you now get tension from the very first inch of movement rather than just at the end of the exercise when your arms are contracted.

So ultimately, yes, you still need heavy bands. But you don't necessarily have to buy any more bands if you understand how to manipulate what you already have in order to make it more challenging.

Doing an incline curl with resistance bands is another effective way to build your biceps without necessarily lifting heavier because this exercise is one of the most challenging drills that you can do for your upper arms.

Conclusion: Are banded reverse curls worth your while?

As with the banded Zottman curl, performing resistance band reverse curls is a convenient and highly effective way to strengthen your brachialis and brachioradialis muscles with minimal equipment.

Bands naturally produce a potent muscle pump, especially if you double loop them because they get heavier as your muscles become more contracted.

Stick to high reps in general so that you get plenty of time under tension. You can certainly lift heavy if you have access to larger bands, but reverse resistance band curls really shine at higher repetitions.