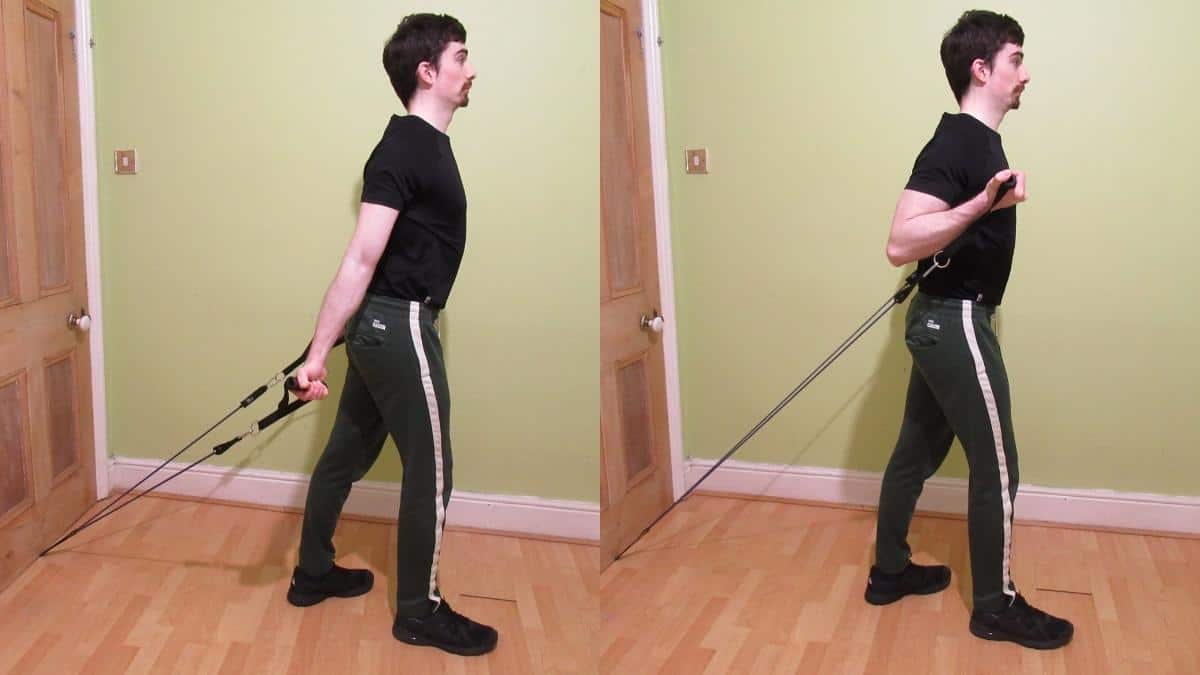 This guide shows you how to do band bicep curls on an incline bench as well as in a standing position.

How to do incline curls with resistance bands

There are four main ways that you can mimic incline dumbbells curls with bands. You saw the first method in the tutorial and now you're going to learn about the other three variations that you can do to build your biceps.

You can also do a Zottman curl using resistance bands if you want to build overall arm mass rather than just focusing purely on the biceps. Of course, you can do this exercise in addition to the banded incline curl as well to work your muscles from different angles.

Incline bench band curls are ideal if you want to get as close to the traditional incline curl as possible while still using bands.

To perform it, set the back pad of an incline bench to a 60-degree angle and sit on the seat. While sitting down, place your feet in the middle of the band to secure it to the floor. Hold the ends of the band in your hands with a supinated grip. Then, lie back on the bench.

Begin the rep by curling the band toward your front delts. Squeeze your biceps forcefully as they touch the undersides of your forearms, and then lower the band under control until your elbows reach full extension.

Like all band bicep exercises, it's best to perform this variation for high repetitions to compensate for the relatively poor resistance curve that's inherent in bands. Specifically, bands become heavier the further you stretch them. So they don't exert much tension during the first part of the lifting motion.

As such, you pretty much have to perform high reps if you want to get enough time under tension in order to stimulate new muscle growth.

The single arm banded incline curl is the best variation to do if you have muscle imbalances that you need to correct or if you want to prevent such imbalances from cropping up in the future.

It's also an excellent exercise for developing a robust mind-muscle connection because you can more easily focus on stretching and squeezing your biceps when you only have to train one arm at a time.

The technique is exactly the same as it is for the version that you saw at the start of this article. You connect the band to a secure attachment point, hold it with an underhand grip, and then curl it toward your shoulder. Finally, you lower the band under control so that your biceps can get a good eccentric stretch.

This exercise produces a similar contraction to the one that you get when you perform concentration curls with bands.

It's not like a kettlebell incline curl where you have the weights behind you.

Instead, you connect the band to an anchor point and then lie back on an incline bench that's facing the anchor point. So in this regard, it's actually the opposite of a traditional incline curl because you're curling with your hands in front of you, which shifts the emphasis onto the short head of the biceps.

Make sure to really squeeze your biceps to take full advantage of the peak contraction produced by this exercise. And, as always, lift with high reps to maximize the pump. Resistance bands drills don't go well with heavy, low rep training.

If you want to target your brachialis and brachioradialis, then you can do so by performing band reverse curls, which are a highly underrated exercise for the arms.

The resistance band incline curl is a convenient exercise that you can perform virtually anywhere, providing that you have a spare five minutes and a liking for bicep lactic acid.

Resistance band incline curls generate a very intense bicep contraction that's not usually possible to achieve with free weight versions of the exercise. As such, your best bet is to stick to high reps to maximize the lactate accumulation in your biceps, which is a proven training strategy for stimulating muscle hypertrophy.