Learn whether you should be doing skull crushers or dips for maximum triceps development. 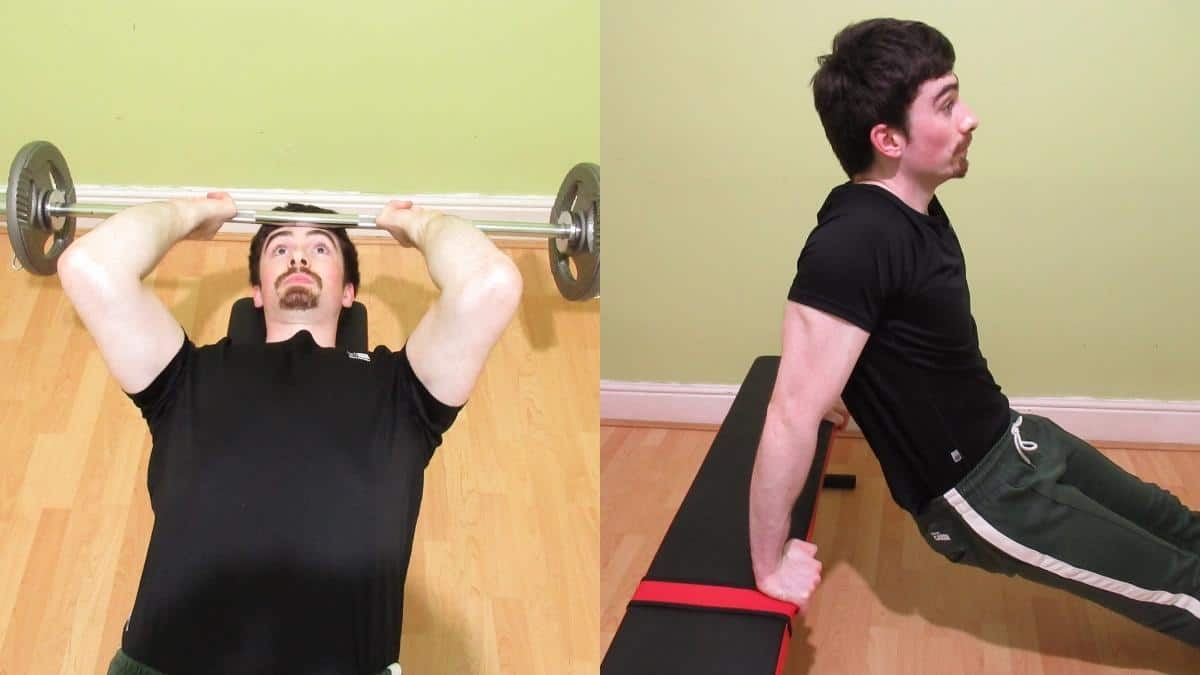 The tricep skull crusher and the bench dip are two of the most popular exercises for building the tricep muscles. But which exercise is better?

And do you need to do both movements to get the best results?

Our skullcrushers vs dips comparison settles the score and explains which of the two exercises you should be doing for your triceps.

Which one is best for building muscle?

If that’s the case for the upper arms, then the long head of the triceps definitely makes up two-thirds of your triceps mass.

As such, if you want to build your triceps to their full potential, then you need to prioritize exercises that target the long head.

In practice, this means performing exercises that combine elbow extension with plenty of shoulder movement because, unlike the other two tricep heads, the long head performs shoulder extension as well as elbow extension.

Skullcrushers are much better than dips in this regard because they put the all-important long head of your triceps under a far greater stretch.

Additionally, since skullcrushers put less strain on your rotator cuffs than dips, you can lift heavier on the former exercise and thus overload your triceps with more resistance to make them grow larger.

Which exercise is best for gaining strength?

If by strength, we’re talking about the ability of a muscle to produce force, then whichever exercise builds the most muscle is best for strength gain.

But if you’re talking about strength as a combination of skill and muscle size, then it depends on what exercise you’re using to test your strength.

Performing dips obviously makes you stronger at dips because you’re practicing the movement pattern regularly and engraining it in your brain.

But since skull crushers are better for triceps hypertrophy than dips, they naturally have more carryover to your other tricep exercises and your compound presses.

Note how I said gaining strength and not adding weight. While the two aren’t mutually exclusive, you can add a lot of weight to dips without actually making the exercise much harder because, by putting weight plates on your legs, you’re not directly loading your triceps (a weighted vest is a much better option, in this regard).

But when you add even a minuscule amount of weight to skull crushers, your triceps get to benefit from every ounce of the resistance because the weight is applied directly over your triceps.

Which one is better for beginners?

Many people believe that dips are the ultimate beginner exercise because they have a reputation for being a simple exercise to perform.

Far from being the case, skull crushers are a better choice for novice lifters who want to strengthen their triceps because they allow for an even lower starting resistance than dips.

Dips are also frequently performed with injurious technique; people grab the bench/chair with their fingers pointing forwards rather than to the sides. This causes their shoulders to collapse forward and places a criminal amount of strain on the rotator cuffs.

The only reason why some trainers rate dips so highly is that they’re accessible to beginners since they don’t require any equipment (as if novice lifters aren’t able to buy weights). Being a bodyweight movement obviously makes dips more universally accessible than skull crushers, but they’re not better in terms of training the triceps.

Skullcrushers can certainly replace dips because they work the lateral and medial heads of the triceps just as well while also giving the most important head—the long head—a far better workout than dips.

You can, of course, do both exercises.

A good setup would be to use skull crushers as your primary exercise and perform them for lower reps (10-15) to target the fast-twitch muscle fibers (of which the triceps has plenty).

Just don’t use really low reps because skull crushers, while safe when performed with the proper form, do put a lot of torque through the elbows.

After skull crushers, you could perform some high-rep dips to pump up your triceps and recruit any remaining, stubborn slow-twitch muscle fibers.

Dips don’t work the long head of your triceps anywhere near as effectively as skull crushers do because they don’t allow shoulder flexion and extension during the rep.

Since combining elbow extension (a component of both exercises) with shoulder extension and flexion is the optimal way to work the long head, you should only replace skull crushers with a like-for-like replacement (see our French press vs skullcrushers comparison for more info on this).

Should you do dips or skullcrushers first?

Doing skull crushers at the start of your session (or at least before dips) will enable you to overload the critical areas of your triceps with more resistance to make them grow faster.

Skull crushers are also safer to load up on than dips because they put less strain on your rotator cuffs.

Dips aren’t suited to low reps (and arguably not even to moderate rep training) because they’re complicated to overload.

As such, they’re much better reserved as a finishing exercise after you’ve done your compound movements and mass-builders (check out our close grip bench press vs skullcrushers debate for another comparison).

Are skull crushers or dips safer?

As mentioned, dips place more stress on your rotator cuffs than skull crushers.

This shoulder stress is particularly bad considering that dips aren’t even a shoulder exercise.

You can, of course, make dips safer by externally rotating your shoulders and essentially facing your fingers to the sides (on the bench) rather than forward.

Skull crushers can obviously put a lot of pressure on the elbows and are a problem exercise for some lifters because of this. But you can reduce the strain dramatically—and give your triceps a much better workout in the process—by lowering the bar behind your head rather than directly to your forehead.

Dips vs skullcrushers: The verdict

Skull crushers and dips are both excellent exercises in their own right, and you can certainly include both movements in your routine.

Skull crushers are the superior choice for developing maximum triceps mass because they train the head—the long head—that accounts for most of your triceps size, much more optimally than dips.

Dips, on the other hand, require no equipment because you can do them on a chair or on your sofa. The disadvantage of dips is that, when performed incorrectly, which is to say most of the time, they can strain your shoulders and cause a rotator cuff injury, especially if you’re using additional weight.

I hope that you enjoyed our dips vs skullcrushers comparison and learned a thing or two. If you want to do both exercises, then start with skullcrushers because they’re better for overloading the triceps since they train all three heads optimally.