How to do decline skull crushers with a barbell, dumbbells, an EZ bar, and more 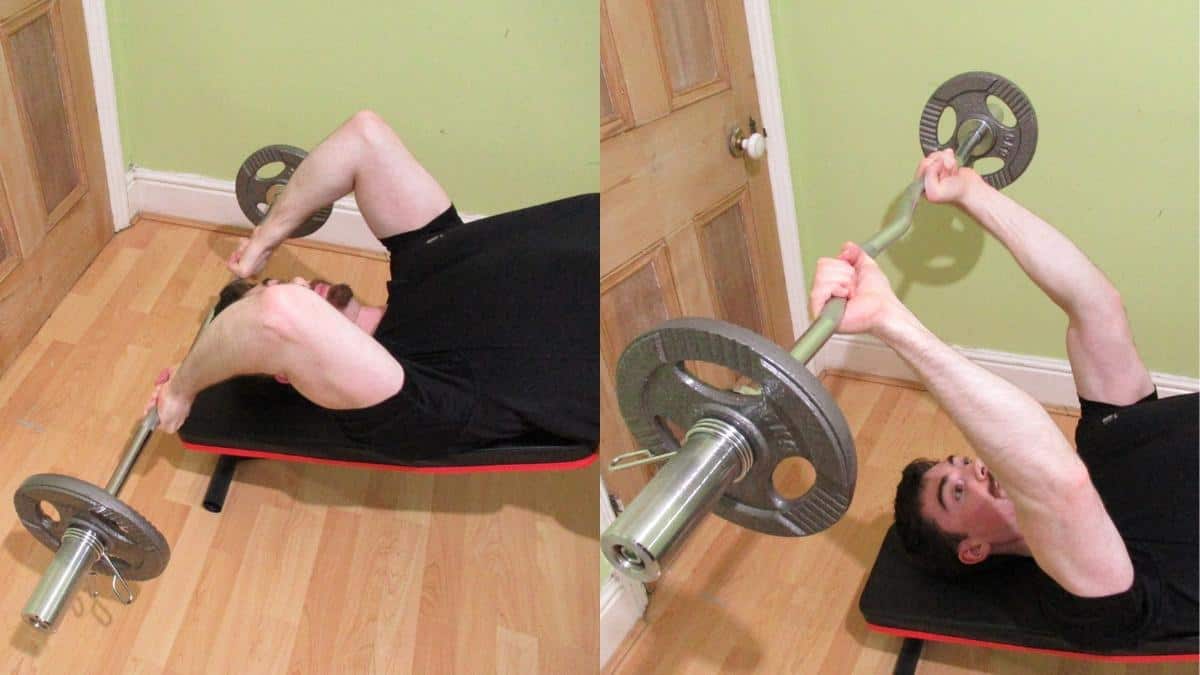 Decline skull crushers are an excellent exercise for building overall triceps mass because they train all three heads and give particular emphasis to the largest of these heads, the long head.

The long head resides on the inner part of your upper arm and is the area that’s most responsible for filling out your t-shirt sleeves. So if you want your arms to look big even when you're not flexing, then the skullcrusher should be a staple exercise in your routine.

This guide shows you how to do decline EZ bar skull crushers with the optimal form and then demonstrates six additional decline skullcrusher variations that you can do to build your triceps.

How to do decline skull crushers

Decline bench skull crushers encourage you to let your shoulders travel backward due to the sloping angle of the bench.

This, in turn, puts the long head of your triceps under a greater stretch—especially a stronger pre-stretch before you begin the rep—and makes it easier to lower the bar behind your head rather than to your face.

You can, of course, somewhat mimic this advantage with the flat skull crusher by deliberately moving your shoulders back in order to stretch the long head.

Decline skull crushers put your triceps under a greater pre-stretch than flat crushers, making it easier to bring the bar behind your head when using a decline bench.

Additionally, with the decline skull crusher, you need to put slightly more effort into controlling the eccentric phase because, due to a combination of the bench angle and gravity, the bar will have a tendency to move faster during the negative portion of the rep.

You can lift roughly the same amount of weight on both variations, and one isn't necessarily better than the other for stimulating tricep hypertrophy or promoting strength development. Try both versions and see which you prefer.

If your decline bench doesn't have a foot holder, then you might want to stick with the flat version because performing decline skull crushers without foot support requires a lot of core strength, which may make it harder to focus on training your triceps.

Now that you know how to do decline EZ bar skull crushers, it's time to explore the other decline skull crusher variations that you can train your triceps with.

Each version, as we shall see, has its pros and cons. So be sure to pay close attention to learn which type of decline skull crusher is best for you.

Dumbbell decline bench skullcrushers help to minimize tricep size asymmetries by making you lift each weight independently. This isolateral lifting motion means that both of your arms will grow more or less in proportion because they're getting a similar amount of work.

Of course, you may still have a stronger mind-muscle connection with your dominant arm that could influence your rates of triceps growth.

Decline dumbbell skull crushers are also very joint-friendly since they're performed with a neutral grip, which, like the EZ bar, naturally places less pressure on your wrists than when you use a fully pronated grip.

The disadvantage of decline dumbbell skull crushers is, as you might have guessed, the fact that you'll have to lift lighter weights than on the barbell version. This is simply because dumbbells require more stabilization than barbells.

Ultimately, the reduction in resistance might be worth it if you want to ensure that your triceps are as symmetrical as possible, which is particularly important if you're a bodybuilder.

The decline barbell skull crusher is an excellent exercise for gaining mass because it enables you to overload your triceps with a very high absolute load.

Performing decline skull crushers with a barbell is also highly conducive to progressive overload because you can break through strength plateaus by adding fractional plates to the bar, something that's not possible with dumbbells.

On a less positive note, decline barbell skull crushers put more pressure on your wrists than their dumbbell and EZ bar counterparts, a discomfort that will only increase as you gain strength.

For this reason, you're best off doing the decline close grip skull crusher with an EZ bar. This is because easy curl bars have wrist-friendly semi-pronated grips—and they enable you to overload your triceps with more resistance than dumbbell decline bench skullcrushers.

As with the DB decline skullcrusher, the decline kettlebell skull crusher is a top-tier exercise for building triceps that are not only big but symmetrical too.

The difference is that kettlebells have you lift with a pronated grip, which may place slightly more stress on your wrists than the neutral hand position offered by dumbbells.

Additionally, kettlebells tend to increase in larger increments than dumbbells, so they're not as effective for gaining strength on a regular basis.

Nonetheless, for a triceps accessory lift, decline kettlebell skull crushers are a solid choice that ticks most of the boxes and has the added symmetry-enhancing benefit of being a unilateral exercise.

If you want to test your triceps with constant tension, then decline cable machine skull crushers will give you the pump that you're after.

Unlike free weight decline skullcrushers, which don't provide much resistance at the top of the rep, decline cable skull crushers tax your triceps with constant tension throughout the whole duration of the repetition.

This consistent resistance naturally intensifies the peak contraction and enhances your arm pump by keeping the lactic acid within your triceps until the set is over.

The only disadvantage is that the exercise is harder to set up than the free weight version because you need access to a bench and a cable column at the same time, which is easier said than done in busy gyms.

Also, if your bench doesn't have a foot holder, then you're going to need formidable core strength to keep your body stable while you perform cable decline skull crushers because the pulley will be trying to pull you backward.

On the one hand, the decline Smith machine skull crusher is a great exercise because it requires zero stabilization—so you can focus purely on working your triceps—and it's safe in the sense that you can rest the bar on the stoppers if you reach failure.

That being said, the Smith machine forces you into using a fixed bar path. While this is fine for some exercises that have a linear motion, it's far from ideal for movements like skull crushers that have an arcing lifting pattern.

So unless you have iron joints, decline Smith machine crushers will probably irritate your elbows if you're lifting a decent amount of weight.

They may also hurt your wrists since you have to hold the bar with a rather unnatural fully pronated grip.

For these reasons, you're better off sticking with free weight decline skull crushers that give you more freedom of movement so that you can avoid elbow pain and increase your triceps activation.

The decline band skull crusher is an accessible, pump-inducing exercise that you can perform just about anywhere. All you need to get those tricep gains is a single resistance band, a bench, and a secure anchor point. (You can always do floor skull crushers instead if you don't have a bench).

So while your triceps won't feel much of a challenge initially, the exercise will become considerably harder as the rep progresses, especially as your elbows close in on lockout.

Conclusion: Should you do decline skull crushers or not?

Decline bench skull crushers are an excellent exercise because they put the long head of your triceps (by far the largest head) under a remarkable, size-building stretch.

The decline DB skull crusher and its many variations are also useful for maintaining the proper form (lowering the weight behind your head rather than to your face) because the slope of the bench encourages you to keep your shoulders back.

While decline skull crushers produce results at any rep range—providing that you perform sufficient volume at a close enough proximity to failure—your best bet is to do 3-5 sets of 10-20 reps per workout.

This way, you won't risk triggering endurance adaptations at the expense of muscle growth by doing excessively high reps. And you also won't put unnecessary stress on your elbows by lifting too heavy.