How safe and effective are Smith machine skull crushers? 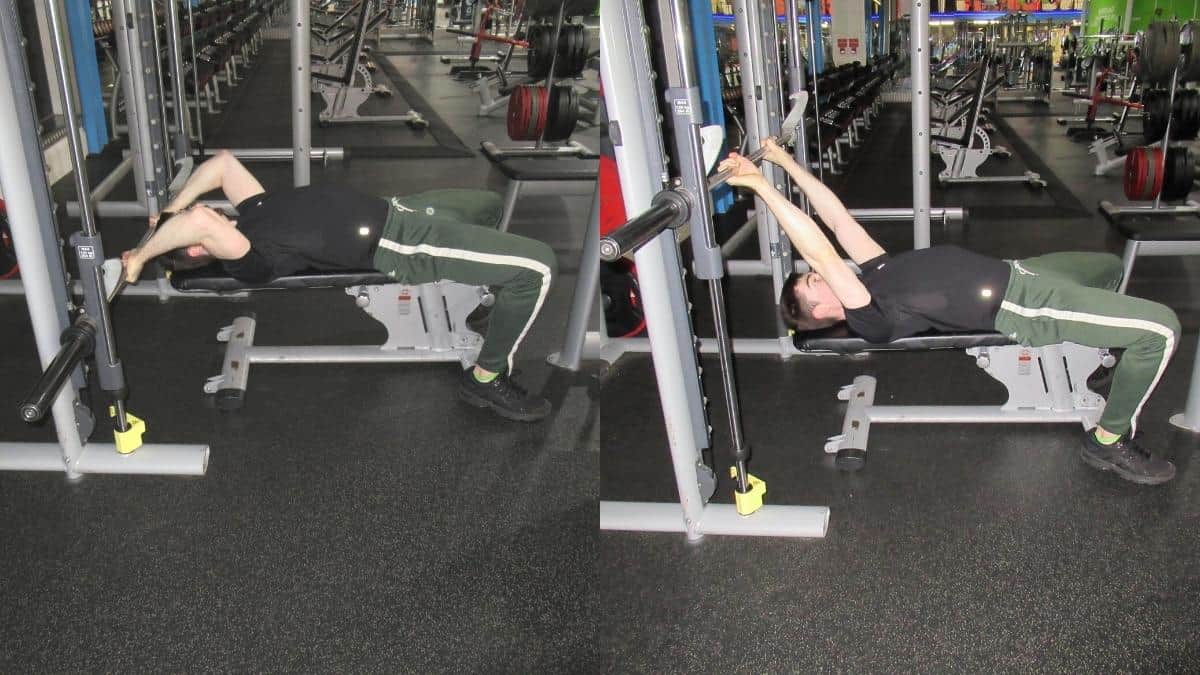 Smith machine skull crushers remove most of the stabilization requirement from skull crushers and enable you to focus purely on working your triceps.

Although the Smith machine skull crusher forces your joints into a fixed position and can thus be quite harsh on your elbows, the movement is relatively safe because you can't drop the bar on your face if you make use of the safety catches.

This guide shows you how to do skullcrushers on the Smith machine and discusses the safety and effectiveness of the exercise.

How to do skull crushers on the smith machine

If all the benches are taken, or if you don't want to keep repositioning a bench in order to find the optimal position, then you can simply do Smith machine floor skullcrushers instead (ideally with an exercise mat). This way, if you need to change the position of your torso, you can just shuffle back and forth instead of moving a bench around.

Similarly, you can actually set the safety pins to just above head height so that your face and body are completely protected in the event that you lose control of the bar and drop it.

The trade-off of deploying the safety pins (but one that’s well worth it) is that you'll slightly shorten your range of motion (ROM).

This may actually be a good thing, however, because by lowering the bar to the safety stops on every rep—i.e., to the same place—you're creating a standardized ROM that allows you to accurately gauge your strength progress (if you're using the same lifting motion and adding weight to the bar then you know that you're getting stronger, not just using a shorter ROM).

On the other hand, you could argue that Smith machine skullcrushers are unsafe because they force your joints into fixed positions. So unlike with the incline dumbbell skull crusher, you can't move your shoulders backward to get a better triceps stretch when you're doing skull crushers on a Smith machine.

Who should do Smith machine skull crushers?

If you want to remove the stabilization requirement from skull crushers, then doing them on the Smith machine is a smart move to make because it enables you to focus purely on working your triceps. This is because the machine prevents the bar from moving side to side or backward and forward; the bar can only move straight up and down.

In theory, the fixed ROM of the machine places more stress on your joints because your wrists, elbows, and shoulders aren't as free to move around—they're forced into a predetermined bar path that may not necessarily suit your anthropometry.

Yet, in practice, many lifters actually report that the Smith machine skullcrusher irritates their elbows less (or not at all) than free-weight skull crusher variations like plate skullcrushers or the kettlebell triceps skull crusher.

The fixed bar path could cause more joint stress, but it may also help you to better isolate your triceps.

So if you're a bodybuilder seeking to keep the tension on your triceps, then, providing that it doesn't hurt your elbows, the Smith machine skull crusher could help you to better isolate your triceps and improve your pump.

The only real drawback in terms of triceps activation is that you can't move your shoulders back and forth to maximally recruit the long head.

This is actually a significant downside because the long head (which is by far the biggest triceps head) performs shoulder extension as well as elbow extension.

So in order to grow the long head of your triceps to its fullest potential, you need to perform movements that allow a liberal amount of shoulder movement combined with elbow extension. And since Smith machine skull crushers force you into using a predetermined bar path, they don't allow you to maximally stimulate the all-important long head.

For this reason, Smith machine skull crushers are suboptimal for triceps hypertrophy.

If you want to burn out your triceps after a hard and heavy workout, then performing bodyweight skull crushers on the Smith machine is a great idea.

Essentially, you want to face the Smith machine, set the bar to hip height, and then place your hands on the bar at shoulder-width. From there, you want to lower your head under the bar so that you get the combined shoulder extension and elbow extension to train the long head of your triceps. Now finish the rep by reversing the motion: Push your hands into the bar while extending your elbows (until they reach complete lockout).

You can perform this variation of Smith skull crushers with just your bodyweight if you want to pump up your triceps with high reps.

Yet, you can also use the movement as a mass-builder by wearing a weighted vest and decreasing your reps to focus on building the fast-twitch muscle fibers (of which the triceps has more than any other muscle group!).

One thing's for sure, performing skull crushers on the Smith machine protects you from some of the nastier injuries associated with skull crushers. For one, you can't drop the bar on your face, neck, or chest if you deploy the safety catches above the height of your body.

Smith machines also make re-racking the bar—at any point during the rep—really easy because you’re always just a wrist turn away from one of the many safety hooks.