We tried every version of incline skull crushers; here are the 7 best variations for triceps development. 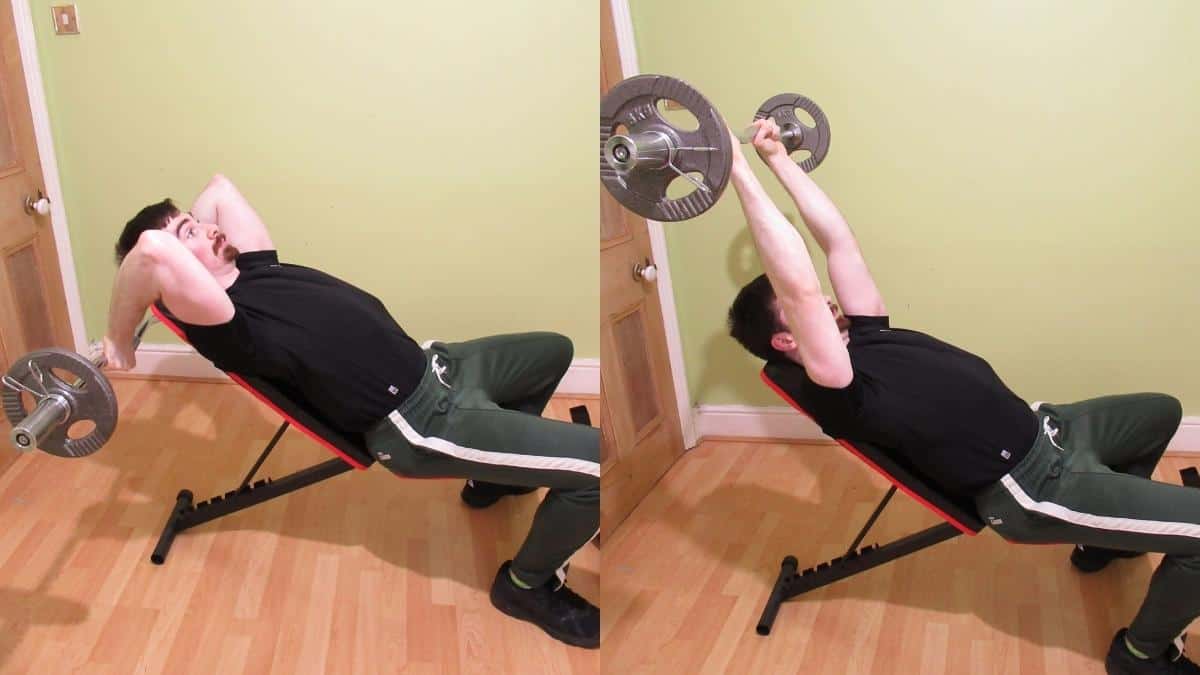 Incline skull crushers are a terrific tricep exercise because they place the long head (by far the biggest head of the triceps) under a tremendous, growth-stimulating stretch.

This guide demonstrates the proper incline skull crusher form for seven different variations of the exercise so that you can get a great workout regardless of what equipment you're using.

How to do incline skull crushers

As you might already know, you should never lower the bar to your face during skull crushers.

This is because doing so can hurt your elbows and, as the name of the exercise implies, crush your face.

Lowering the bar to your forehead also reduces the stretch that the long head of your triceps gets put under, which in turn impairs your muscle growth.

The majority of lifters tend to feel a stronger stretch in their triceps during incline bench skull crushers.

The great thing about incline skull crushers is that it feels harder to lower the bar to your face. So almost by default, people lower the bar behind their head instead.

Some lifters also feel a stronger stretch in their triceps when performing skull crushers on an incline bench.

The downside of incline skullcrushers is that they're not ideal for training to failure because dropping the bar from such a height could be dangerous if you're training in a busy gym.

So if you plan on pushing your triceps to the limit with incline skull crushers, make sure that you have a spotter handy to take the bar off you once your triceps reach failure.

You've already seen the incline EZ bar skull crusher. This is the most recommended variation because easy curl bars have semi-pronated grips that take a lot of pressure off your wrists, which in turn enables you to focus more on training your triceps.

Yet, as we shall see, there are other types of incline skullcrusher that offer additional benefits such as better muscle symmetry and constant tension.

Performing incline dumbbell skull crushers helps you to sculpt triceps that are symmetrical as well as big and muscular because you have to lift each weight independently.

This ensures that both of your triceps are performing roughly the same amount of work and thus growing more or less at the same rate (though your mind-muscle connection can still affect which side receives better stimulation).

It's also easier to get the dumbbells out of a precarious position if you reach failure without a spotter because you can use your lats to pull them forward.

With incline barbell skullcrushers, on the other hand, if you reach failure, then you're stuck with the bar because it's not like you can use your lats to pull the bar forward because your head will be in the way (with dumbbells, you can bring the weights past either side of your head).

The downside of the incline dumbbell skull crusher, of course, is that you have to lift less weight because dumbbells are harder to stabilize than barbells. So while the dumbbell version is ideal for sculpting perfect tricep symmetry, it's not necessarily the best option for building maximum arm mass, especially considering that you can’t effectively microload dumbbells.

It's a great exercise in the sense that it enables you to overload your triceps with more resistance than any other comparable isolation exercise. This extra weight that you're lifting will, in turn, lead to bigger and stronger triceps, which is ideal for both powerlifters looking to boost their bench press lockout strength and also for bodybuilders seeking bigger arms.

However, straight bars are notorious for causing wrist pain, something which you may start to experience as you gain strength on the incline barbell skull crusher.

So if you want to do everything in your power to keep your wrists as healthy as possible, then you're best off sticking with an EZ bar for incline bench skull crushers.

Performing skull crushers with cables enables you to tax your triceps with constant muscle-building tension.

One of the faults with regular skull crushers is that there's not a great deal of resistance at the very top of the rep.

But you can change this by using cables.

Although the incline cable skull crusher is undeniably tricky to set up, the extra effort will be worth the enhanced pump and intensified peak contraction if you're a keen bodybuilder.

You can also experiment with different pulley positions to alter the resistance curve slightly and make the setup easier. For example, using a low pulley position will give you tension from the very first millimeter of movement, but unless you're using lighter weights and high reps, it also means a very complicated setup.

On the other hand, you could use an adjustable pulley and position the cable just above the backrest so that you can easily grab it from a lying-incline position. You might not get quite as much tension during the initial part of the rep when you do incline cable skull crushers this way (though you will still get a decent amount), but the peak contraction will be unmistakably intense.

The icing on the cake is the fact that you can experiment with different cable attachments to see which you find most comfortable.

The Smith machine version is safer than the barbell variation (in some respects), providing that you use the safety stops because you can easily let go of the bar without any consequences when you reach failure.

On the other side of the coin, doing incline skull crushers on the Smith machine might hurt your elbows because the machine forces you into a fixed bar path—a range of motion that you would never follow on the free weight variation.

Similarly, since Smith machine bars are straight rather than curved, they can also hurt your wrists by forcing them into an unnatural, fully-pronated position.

For these reasons, although the exercise can work, most people are better off sticking with free weights for the incline skullcrusher.

Like their dumbbell counterpart, incline kettlebell skull crushers are the ideal exercise for minimizing tricep size asymmetries because they force you to lift each weight independently.

Unlike DB incline skull crushers, the kettlebell version has you hold the weights with a pronated grip.

Some lifters believe that this hand position intensifies the peak contraction. But considering that triceps activation isn't affected by elbow position, the enhanced contraction is likely just as a result of them squeezing their triceps harder in anticipation of this supposed next-level contraction.

The downside of incline kettlebell skull crushers is that it can be hard to gain strength regularly if you don't have an extensive set of kettlebells at your disposal. While a 5lb weight jump might not seem like much, it can be more than a 50% increase in many cases. Would you ever just randomly increase your bench press working weight by 50%?

So be careful of making this movement your primary exercise if you're in pursuit of maximum triceps mass.

The incline resistance band skull crusher provides your triceps with consistent, even if rather inconsistent, tension.

With bands, you get very little tension at the beginning of your reps. But, as the band becomes more stretched and your rep nears completion, the tension becomes much more challenging for the working muscles.

Knowing this, your best bet is to actually combine the band with regular free-weight skull crushers since they have somewhat opposite resistance curves; incline band skull crushers are hardest at the end of the rep, the free weight variations are more challenging in the mid-range.

So by adding bands to incline bench skull crushers, you'll achieve a stronger tricep peak contraction by making the exercise harder at the top of the rep.

You can, of course, get a great workout from doing the band-only version if you train hard enough.

Similarly, if you don’t have access to a bench, then you can always do skull crushers on the floor instead.

Performing skull crushers on an incline bench encourages you to protect your elbows and face by lowering the bar behind your head rather than to your forehead.

You can, of course, do this with the flat version as well. But due to the shoulder position of the incline version and the fact that you're further up the bench, lowering the bar behind your head feels even more intuitive with incline skull crushers.

The incline skull crusher is also an incredibly versatile tricep-builder that you can perform with a wide variety of equipment, each of which, as we established, has its pros and cons.

Perform 3-5 sets of incline skullcrushers 1-2 times per week, and make sure to leave 1-2 reps in reserve on each set so that you don't hit failure and get stuck with the bar behind your head!