Are resistance band skull crushers good for your triceps?

These 6 resistance band skull crushers will tone and strengthen your triceps. 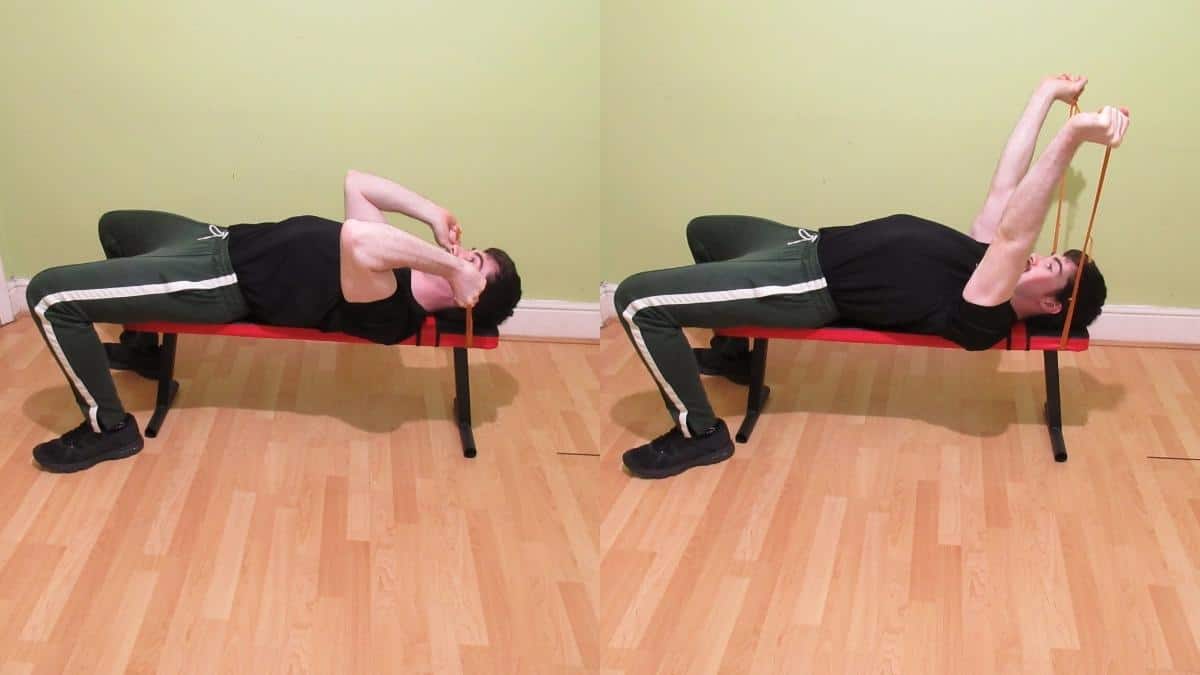 Exercises like EZ bar skull crushers are certainly more popular than their resistance band counterparts. But if you can't get to the gym and don't have any free weights at home, then performing the resistance band skull crusher is one of the best ways to build and strengthen your triceps.

Resistance band skull crushers are also an excellent exercise for high-rep tricep training because they really pump up your arms due to their constant, progressively increasing tension.

This guide shows you how to do the band skull crusher exercise with the optimal tricep-building technique. You'll then discover another five banded skull crusher variations that you can do to add variety to your workout routine.

How to do resistance band skull crushers

Banded skull crushers are both highly effective and highly convenient for strengthening the triceps. But wrapping your band around the backrest of a bench isn't the only way to perform this muscle-building movement. With just a few modifications, you can make regular resistance band tricep skull crushers even more optimal for hypertrophy.

Why choose between resistance bands and free weights when you can benefit from using both?

The traditional DB skull crusher is a tremendous tricep-builder because it provides heavy free-weight tension while ensuring that both of your triceps receive similar amounts of work.

While dumbbell skull crushers undoubtedly provide an intense, muscle growth-stimulating stretch, they don't offer much in the way of resistance at the top of the rep as your elbows approach lockout.

You can remedy this suboptimal strength curve by adding bands to your DB skull crushers, which you can do by hooking your band under the bench or, for even more tension (because bands get heavier the further you stretch them), connecting it to an anchor point further away.

Now, with combined free weight and band tricep exercises, not only will your triceps get that all-important eccentric stretch, but they'll also receive an intense peak contraction as you lock out your elbows.

The end result is a stronger muscle growth stimulus for your triceps because they have to work even harder than usual now that there are challenging levels of tension at every point in the rep.

If you're prepared to sacrifice a bit of triceps symmetry in exchange for more muscle mass, then banded BB skull crushers are the exercise for you.

While your stronger arm is likely to contribute more force during banded barbell skull crushers and thus get a better workout, you'll be able to overload both of your triceps with far more resistance by using barbells rather than dumbbells.

The only drawback is that barbells force your wrists into full pronation, which, with the addition of heavy weight, can place a lot of stress on your joints and connective tissue structures.

You can avoid some of this excessive strain by using an EZ bar rather than a straight bar because easy curl bars have wrist-friendly semi-pronated grips.

The standard band skullcrusher is a great exercise for tightening and strengthening your triceps.

However, the movement only becomes challenging as your elbows approach complete lockout. In fact, the bands exert virtually zero tension during the first part of the rep.

But you change all that by anchoring your band in a low position further away from the bench.

Since most band sets these days come with a convenient door anchor for exercises like this, that's what we'll be using in our demonstration. But you can also tie your band to a sturdy object such as a squat rack if it's easier.

Once you've attached your band to the anchor point, grab the handles with an overhand grip and lie on the bench. Then, extend the band handles up (by flexing your triceps) so that they're directly above your forehead. Next, lower the bands behind your head for a full triceps stretch. This is one rep.

Middle resistance band skull crushers are easier to perform than the low version that you saw demonstrated above because you can easily reach back to grab the band from a lying position.

With the low-anchor-point variation, on the other hand, you have to walk the bands out to the bench and then get in the lying position. This isn't a huge deal, but it does mean that you'll be expending slightly more energy, which you could otherwise dedicate to training your triceps.

Your best bet for doing a mid skull crusher with a band is to connect the band to a sturdy metal pole such as the uprights of a squat rack or cable machine.

Resistance band skullcrushers work at any rep range, including the 30-50 rep zone.

From there, you simply lie on the bench and reach back to grab the band. Then, extend your elbows until they reach full lockout. Lower the bands behind your head until you feel an intense stretch in your triceps, and then repeat for 12-25 reps.

Resistance band skullcrushers work at any rep range. Your triceps, after all, just respond to tension.

Likewise, you can perform resistance band alternating skullcrushers if you want to give each tricep a short rest while your other tricep is working. This way, your muscles will be fresher for their subsequent repetitions and, therefore, you'll naturally be able to achieve more reps on each set.

Although the high resistance band skull crusher isn't my favorite variation, it's nonetheless a viable way to train your triceps.

The "problem" with the exercise, from a hypertrophy training perspective, is that it requires greater core stability than the other types of band skull crusher.

As such, it will likely be harder than usual to feel your triceps working optimally when you also have to forcefully contract your abs to keep your arms and torso stable.

The verdict: Should you do skull crushers with resistance bands or not?

The resistance band skull crusher is a remarkable exercise for training the triceps because it provides constant muscle-building tension while taking much of the usual free-weight skull crusher stress off your elbows, a benefit that you can't get when you do skull crushers on the Smith machine.

Banded skull crushers are also incredibly convenient because you literally just need a single resistance band and a secure anchor point. That's right; you don't even need a bench to get the most from this movement (though using one may make the exercise more comfortable). If you don't have much equipment, you can easily do a band floor skull crusher without a bench and still sculpt terrific triceps.