Discover the 5 pros and cons of BB skull crushers. 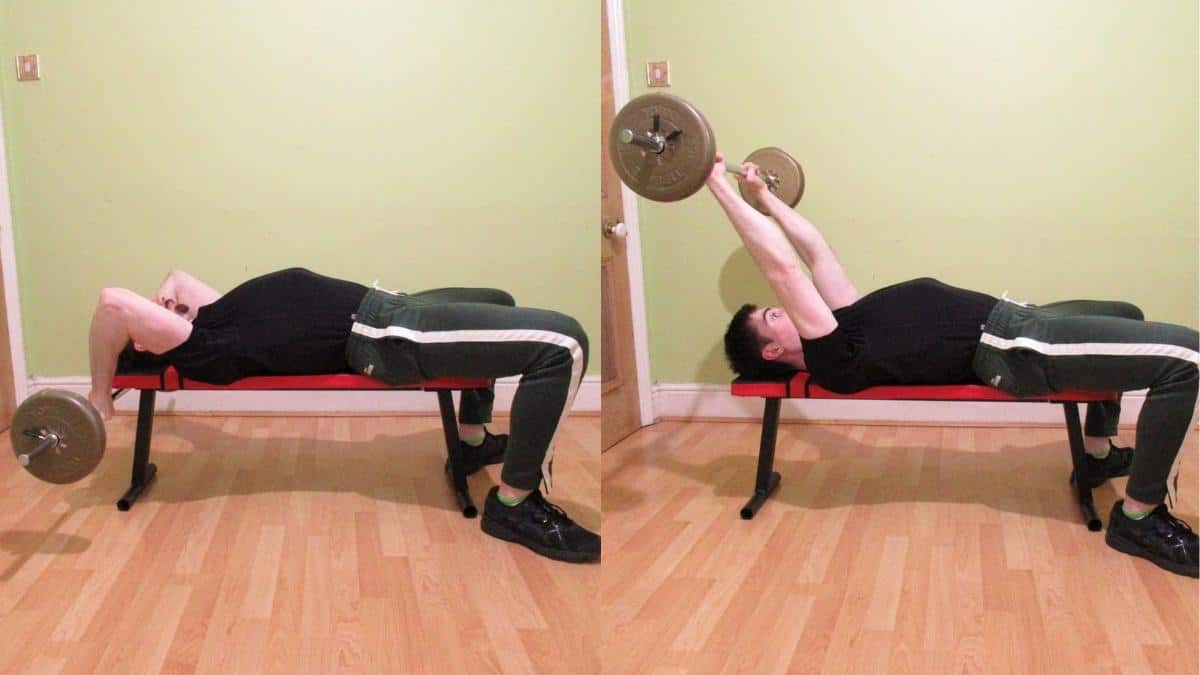 Lying barbell skull crushers are a popular mass-building movement for strengthening the triceps.

Where most lifters go wrong is by lowering the bar to their face rather than behind their head.

Not only does this technique mistake leave your face open to severe damage, but it also places a staggering amount of stress on your elbows.

Worse still, from a hypertrophy perspective, failing to lower the bar behind your head, or, ideally, behind the weight bench, robs the long head of your triceps of the crucial stretch that it needs to grow to its full potential.

This is because the long head performs shoulder extension as well as elbow extension.

So in order to optimally stimulate the long head, you need to allow significant shoulder movement as you perform BB skull crushers.

How to do barbell skull crushers

The barbell skullcrusher is a brilliant tricep-building exercise when you use the proper form. However, even with the best technique in the world, there are still some downsides to this movement that you should take into account before deciding whether or not to include it in your routine.

Performing your skull crushers barbell style is one of the best strength-gaining decisions that you can make for your triceps.

Unlike dumbbells, you can easily microload barbells by adding small or even fractional plates to either side of the bar. This clever practice enables you to gain tricep strength at a faster rate and smash through training plateaus by increasing the resistance in ridiculously small increments.

If you're a keen powerlifter, then this extra resistance will help you to develop a stronger bench press and overhead press lockout so that you can set new PRs more frequently.

On the other hand, if you're training mainly for hypertrophy, then performing barbell skullcrushers (rather than the dumbbell skull crusher) will allow you to place your triceps under greater absolute loads. This is ideal for building muscle, considering that the triceps are one of most (if not the most) fast-twitch dominant body parts.

Pro: Bulks up your triceps

If you want to get that hang on your triceps that just screams, I'm a bodybuilder; then you need to focus on building the long head because it's the biggest head of the triceps by far.

The barbell skull crusher is one of the best exercises in this regard because it trains both functions of the long head: shoulder extension and elbow extension.

Specifically, BB skull crushers put the long head under a phenomenal stretch when you allow a liberal amount of shoulder movement. This stretch, in turn, breaks down the muscle fibers and stimulates robust protein synthesis so that your triceps are primed for hypertrophy.

Loading weights onto either side of a barbell and then hunting down collars can be difficult.

But it doesn't need to be this way because most good gyms have preloaded barbells.

These bars typically ascend in manageable 5-10lbs increments and require absolutely no setup on your part. Therefore, fixed bars are ideal for isolation exercises like straight bar skull crushers where you can't make huge weight jumps on a regular basis.

Similarly, you can easily perform floor skull crushers with a straight bar if you train at home or if all the benches are taken at the gym.

So in this sense, the movement also requires minimal equipment because you literally just need a barbell and a few weights to start reaping the rewards of this proven, old-school tricep exercise.

Con: May hurt your wrists

As effective as the BB skull crusher is for beefing up your triceps, it's also a common cause of wrist pain because straight bars force your wrists into a rather unnatural, fully-pronated position.

You probably won't experience any such discomfort if you're a novice trainee because you simply won't be lifting heavy enough weights to where the resistance irritates your wrists.

Conversely, if you're an advanced lifter, then you might struggle to build your triceps to their full potential if you're experiencing wrist pain from the BB skullcrusher.

You can sidestep this issue, for the most part, by using an EZ bar. Easy curl bars have more joint-friendly, semi-pronated grips that place less pressure on your wrists, which in turn helps you to focus on training your triceps and getting those gains.

Barbell skull crushers undoubtedly build a ton of tricep mass when you progressively add weight to the bar over the months and years.

Yet, performing skull crushers with barbells also leaves you open to tricep size asymmetries, something which may only be exaggerated if you have existing muscular imbalances.

A good tip in this regard is to film yourself performing straight bar skullcrushers. Is the bar lopsided as you lower and lift it?

If so, then your stronger tricep muscle is probably dominating the movement.

You can remedy this by simply using dumbbells and/or by putting extra effort into establishing a solid mind-muscle connection with your weaker arm when using barbells.

The most common way to do barbell skull crushers is on a flat bench with a relatively close grip.

Yet, you can also perform the exercise at different bench angles and with various grips to work your triceps from a different angle.

Note, however, that since triceps recruitment isn't affected by elbow position, it doesn't really matter which variation you pick as long you find it comfortable and can stick to it long term in order to gain strength and muscle by adding weight to the bar.

Resistance band skull crushers are a good option if you combine them with a barbell because you can drastically increase the tension at the top of every rep and thus make the exercise even more effective.

Both the barbell skull crusher and the EZ bar skull crusher are excellent exercises because they enable you to build bigger arms by overloading your triceps with plenty of muscle-building resistance—more so than any other tricep isolation exercises.

The difference is that the EZ version places less stress on your wrists because the semi-pronated grips are much more joint-friendly.

So if you have the choice, EZ bars are always your best bet for triceps training.

The only minor downside to easy curl bars is that it can sometimes be hard to calculate how much you're lifting unless you know the exact weight of the bar (which can differ a lot depending on the brand).

Olympic bars, on the other hand, always weigh 45lbs if they're a standard seven-foot bar. As such, barbells help you to track precisely how much weight you're lifting, which is ideal if you're basing your progression model on your current working weight.

Conclusion: Should you skull crushers with a barbell or not?

Barbell skull crushers are a great exercise for building the triceps, and they tick virtually every box but one.

You always know how much you're lifting with barbells, which naturally makes them the training tool of choice for lifters who like to track their strength progress and plan their training cycles very precisely.

BB skull crushers also enable you to overload your triceps with more resistance than any other isolation exercise, which is optimal for both hypertrophy and strength development.