Meet the man with 27 inch arms

Learn how one weight lifter built his 27 inch biceps. 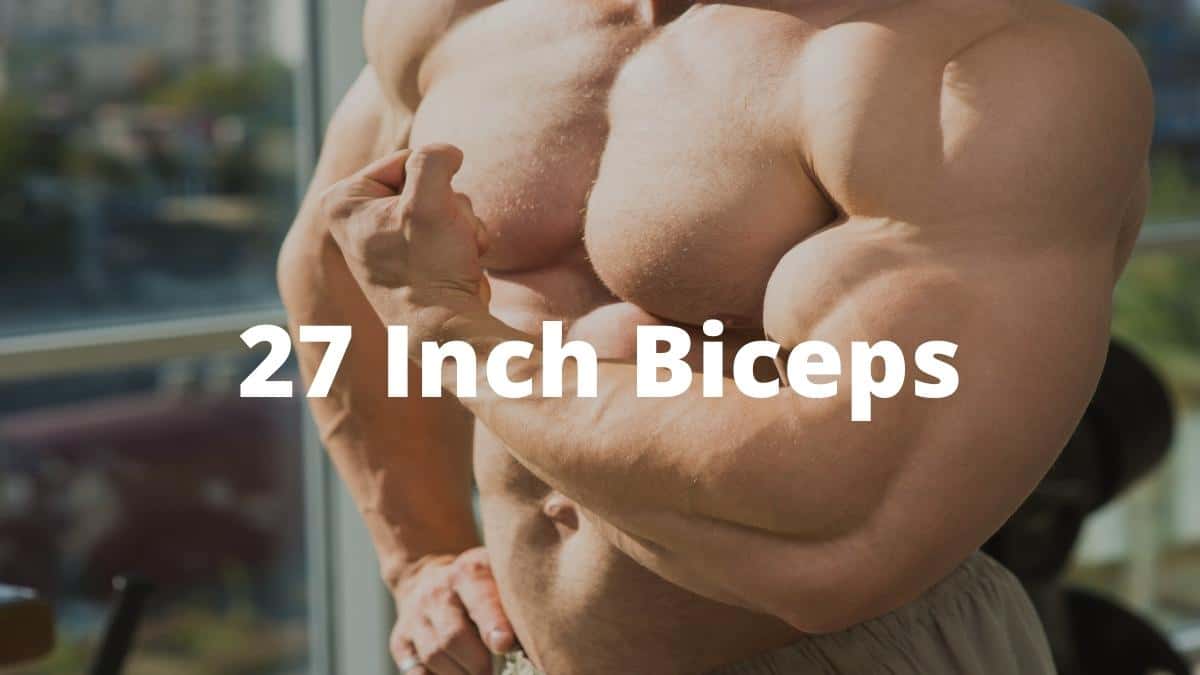 While many gym-goers have arms that are well above the average male arm size, few bodybuilders have 27 inch biceps.

In fact, even when fully developed, the combined mass of the triceps and muscles of the biceps rarely exceed 25 inches. And even then, we’re talking about professional bodybuilders with decades of training experience, top-tier muscle-building genetics, and a boat-load of performance-enhancing drugs (PEDs).

This guide, which is more of a thought experiment, examines whether or not, given an optimal height and build, a natural lifter could build genuine 27 inch arms.

Table of Contents show
Does anyone really have 27 inch arms?
Would it be possible to build 27 inch biceps naturally?
Conclusion: The downsides of having 27 inch arms

Does anyone really have 27 inch arms?

Yes, there are actually some people with 27 inch arms who lift weights. Now, are their biceps made up of pure muscle?

No, their biceps aren’t even the usual combination of muscle and fat. The lifter is clearly using synthol or some kind of site enhancement oil (which we absolutely do not recommend using) to artificially inflate their measurement. [1]

As you can see, his arms don’t look particularly muscular and certainly don’t look aesthetic by any kind of physique show judging criteria.

Nonetheless, as these man’s arms are verified by tape measure, I suppose that we can say there is someone out there who does lift weights and who has a 27 inch bicep circumference.

How big do you think his arms would be without the enhancement oil? I’d say around 10 inches smaller.

Would it be possible to build 27 inch biceps naturally?

Is it possible for a natural lifter to develop 27” arms?

Well, think about this for a second. There are obese people who very likely have 27 inch arms without lifting weights or consuming a high-protein bodybuilding diet.

Now, if you add in 15 years of progressive resistance training and a huge frame (people with big frames have an enhanced capacity to store muscle mass), [2] then I believe that it would technically be possible for a natural lifter to sculpt 27 inch biceps.

It could theoretically be possible for a giant bodybuilder (7 ft plus) with a high body fat level to build 27 inch arms naturally.

After all, if you took a 7 ft giant who already has massive arms from years of lifting and then bulked them up to a relatively high body fat percentage, it’s conceivable that their arms could measure 27 inches.

Now, whether or not anyone’s arms would look aesthetic and muscular at 27 inches is a different matter entirely.

But as far as being possible, I believe that a strong case could be made that, in an optimal scenario, a natural athlete could build 27 in arms.

Conclusion: The downsides of having 27 inch arms

The main downside of having 27 inch arms—or even just big arms in general—is that they’re typically out of proportion with the rest of your body.

Besides making buying clothes a nightmare, 27 inch biceps would dwarf your other body parts and ruin the aesthetics of your physique.

So before you do everything in your power to grow your arms naturally, make sure that you’re giving your other muscle groups plenty of attention as well.

Historically (and in the present day), the arms have always been one of the most overtrained body parts—despite their relatively small size—so don’t let your best muscles groups make the rest of your body look weak.