How to get 22 inch arms: Learn if you have the genetics to build 22 inch biceps

Discover if you have the genetics to build 22 inch biceps. 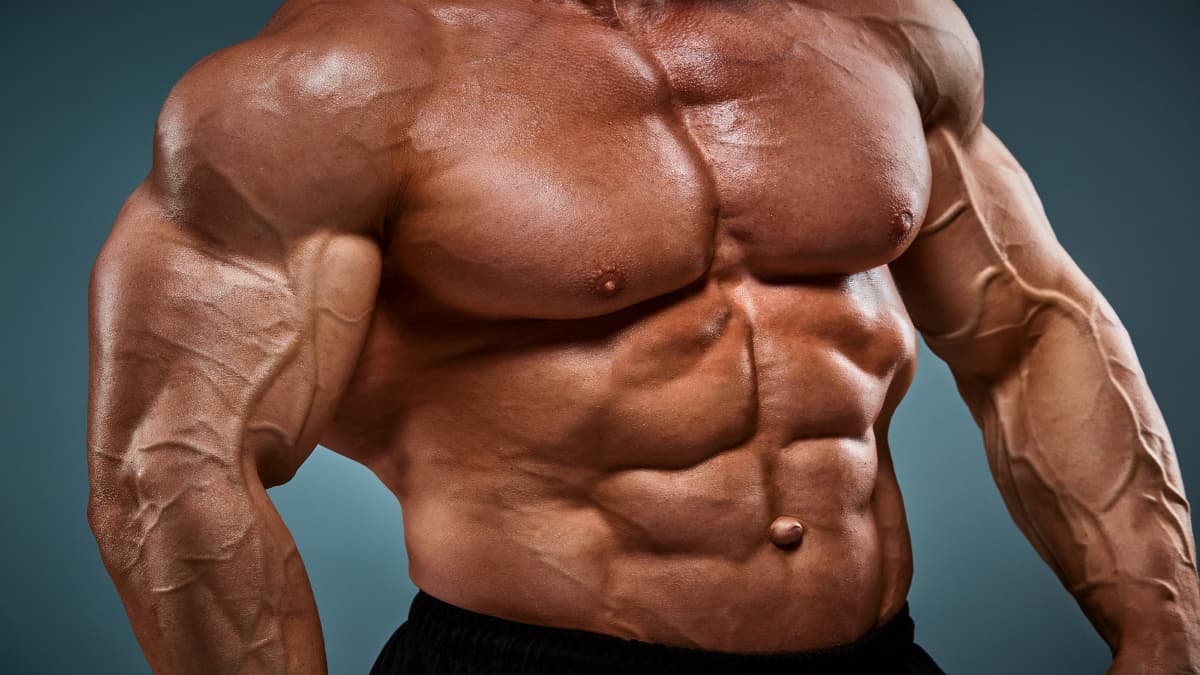 Even if you know how to measure your biceps properly in order to stretch the tape measure to the max, it's doubtful that you'll ever have 22 inch biceps as a natural lifter (or as an enhanced athlete, for that matter).

However, just because a certain bodybuilding feat is improbable for most of us doesn't necessarily mean that it's impossible.

Drawing on real-life case studies and years of mass-building experience, this guide to the biceps brachii explains what it takes genetics-wise to achieve 22 inch arms naturally.

See How Your Arms Stack Up:

Can natural lifters get 22 inch biceps?

Yes, believe it or not, natural lifters can actually get 22 inch biceps if they have the work ethic and excellent mass-building genetics.

But just what do I mean by "excellent mass-building genetics"?

Extremely tall lifters, let's say those over 6'6", obviously have much longer bones than 99% of the gym-going population. This bone length gives them an enhanced capacity to accumulate lean mass because a larger frame naturally has more space than a smaller one to store muscle tissue. [1]

Now, it's highly unlikely that any natural lifter besides giants (those over 7 feet tall) has the capacity to build lean 22" biceps.

Still, if you're really tall but not a giant, then you could likely get 22" arms naturally if you bulked up to a relatively high body fat level and maxed out your upper arm genetic potential.

These 22 inch bicep case studies give you an insight into the dedication and genetics that are required to develop a tape-tearing 22 inch arm circumference.

IFBB Pro bodybuilder Shawn Smith has shredded 22 in arms. He shared his workout so that you can see the kind of work and intensity that it takes to grow your arms to a significant size.

First off, Shawn Smith, unlike some pro bodybuilders, typically lifts with very strict form on his sets so that he can keep tension on the target muscles. Sure, sometimes he'll swing slightly to cheat the weight up so that he can take his bis and tris past the point of failure. But that's only after his muscles reach failure via strict technique.

Additionally, Shawn isn't afraid to use machines in order to take the balance factor out of the equation. When you're training for hypertrophy like he is, it's often best to leave your ego at the door and do the exercises that actually train the target muscles the best. Much of the time, this means using machines for some of your heavy compound lifts.

Getting your arms anywhere near the 22-inch mark means hitting your biceps and triceps from different angles.

Within his high-volume workout, Shawn also shows the importance of hitting your arms from different angles so that you can recruit as many muscle fibers as possible. So for triceps, he did pushdowns (great peak contraction) followed by close grip bench presses (heavy overloading) followed by overhead extensions (intense stretch).

Of course, building 22 inch biceps isn't as simple as eating big and following Shawn Smith's or anyone else's routine. You need the right genetics and more than just protein shakes if you want to get into the 22-inch club.

You can, of course, take inspiration from people like Shawn and use their expert, battle-tested training advice to grow your arms significantly. Whether they'll ever get to 22 inches depends on your frame size and body fat level.

IFBB Pro Bodybuilder Morgan MacDonald stands 6'2" and has lean 22 inch arms. He's the perfect example of how having a bigger than average frame can help you to build serious bicep and tricep size.

Now, I know that many natural lifters like to dismiss the advice of pro bodybuilders. However, you can actually learn a lot from watching them train.

Something that both Shawn Smith and Morgan MacDonald note is that warming up your joints is absolutely critical for making long-term gains.

If you've already got big arms, then it's highly likely that you can lift a lot of weight. As such, you need to warm up your tendons at the start of your session so that they can keep up with the strength of your biceps and triceps. In practice, this usually means doing contraction-focused exercises like pushdowns for high reps while steering well clear of muscular failure.

MacDonald also stresses the importance of working your muscles from different angles if you want them to grow. For example, he'll do exercises that work the upper region of his biceps and movements that emphasize the lower portion.

Actor and Mr. Universe winner Calum von Moger is 6'2" and has mind-blowing 22" arms. You'll notice from his videos that he trains hard, heavy, and with plenty of volume. [3]

Even if you show up to the gym week in, week out and have the best diet in the world, your arms are unlikely to reach their potential unless you're willing to perform high-volume training.

As you can see in his video, Calum's arms aren't just big; they're extremely strong too. I had to do a double-take, but it looks like he was curling more weight than a lot of guys bench press.

This colossal feat of strength tells you something important: You have to lift heavy weights if you want grow 22" biceps or even reach your individual upper arm genetic potential.

Yes, using the proper form is undeniably important, but you also need to increase the resistance in order to overload your biceps with the heavy mechanical tension that they need to get bigger. Calum is proof of that.

Learning how to get 22 inch arms isn't as simple as taking a few supplements and hitting the gym three times a week.

In addition to a decade-long commitment to bodybuilding and unwavering dietary discipline, you need the genetics, which is to say, the frame size, that has the potential to build 22 inch biceps in the first place.

So if you've got the bone mass and dedication, then you've likely also got what it takes to sculpt 22 in arms naturally. But do you actually want to build 22 in biceps?

After all, it's highly likely that you'll also need to bulk up to a fairly high body fat if you genuinely want to achieve a 22 inch circumference measurement.

The risk, in terms of aesthetics, is that your arms might actually look smaller if you gain too much body fat. That's why it's often best for natural lifters to simply focus on bringing up weak body parts or particular heads of muscles rather than on chasing pro-level physique size.

The verdict: Who can realistically get 22" biceps?

As mentioned, you need a huge frame if you want to get 22 inch biceps naturally. And even then, you'll have to sacrifice your leanness in order to bulk your arms up to a 22 inch circumference.

If you're of an average height and build, however, then developing 22 inch arms naturally—without being obese—is so unlikely that it might as well be impossible.

After all, the pursuit of getting 22 inch biceps is a completely arbitrary training goal. Most lifters are better off lowering their arm size expectations a bit and chasing aesthetics (lean muscles often look much bigger than they are) rather than circumference measurements.