Can you really get 21 inch biceps/arms naturally? 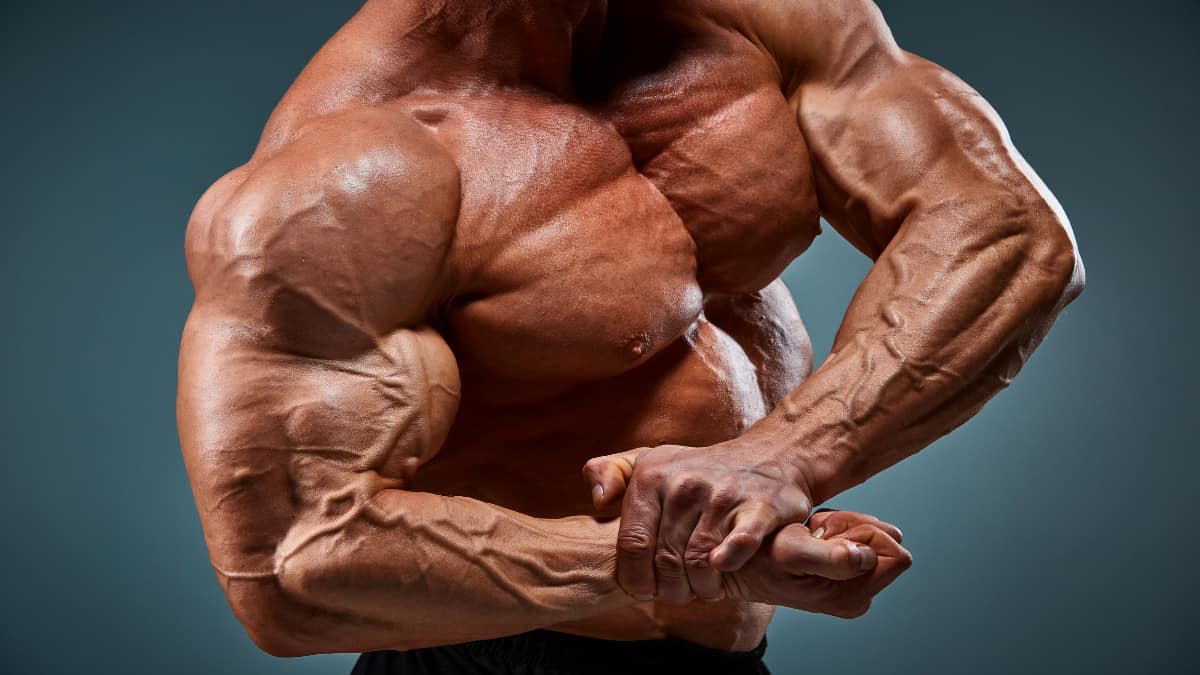 If you know how to measure your biceps correctly, which is to say flexed and around the largest part, then it's possible to bulk up your measurement by half an inch to an inch.

However, building 21 inch biceps is a different story.

You can't just get a gym pump—no matter how intense—and then expect to magically have 21 inch arms.

Although your biceps muscles might have more growth potential than you think, sculpting 21" arms isn't possible for everyone. However, as you'll see in the case studies below, 21" biceps are a real possibility if you're big-framed and genetically blessed for building mass.

How Do You Measure Up?

Table of Contents show
Can you get 21 inch biceps naturally or not?
21 inch bicep case studies
Case study 1: John Meadows
Case study 2: Leroy Colbert
Case study 3: Mike O'Hearn
How to get 21 inch arms
Experiment with your arm training frequency
Bring up your weak points
Bulk up to a higher body fat
Take a pumped measurement
Conclusion: Is it possible to build 21 inch biceps?

Can you get 21 inch biceps naturally or not?

Yes, it's possible to build 21 inch biceps naturally if you have the dedication, patience, and, above all, the right genetics.

If you're exceptionally tall (let's say 6'7" and over) and train your arms hard and heavy, then building 21 in biceps is a real possibility for you.

This is because tall people have much longer arm bones than shorter people. All else being equal, longer bones have more capacity than shorter bones to store muscle mass. [1] So while the arms of tall lifters don't always look the biggest, they're often the largest in terms of circumference measurement.

So the rest of us, in addition to training for years and even decades, will have to bulk up to a relatively high body fat level to get arms that are anywhere near 21 inches.

The late John Meadows was incredible in many ways, and his biceps were certainly no exception.

His arms—at a ridiculously low body percentage—were the same size as some people's legs.

He was only 5'6". People of his height simply aren't "meant" to have arms that big. So it just goes to show what kind of results decades of hard work can get you!

Unlike other bodybuilders, John—ever the trustworthy training partner—actually verified his measurement on camera with a tape.

If you want to know how he built 21" arms, then I highly recommend watching his videos because they truly are some of the best on YouTube (both in terms of production quality and information).

As you'll soon learn, John was a big stickler for good form. But he also used many unconventional exercises during his training career to build what are, in my opinion, some of the most well-developed arms to ever grace the bodybuilding stage.

Leroy Colbert is the first man to ever have built 21 inch arms (specifically 21.25 inch arms), a feat which is only made more impressive by his humble beginnings.

Colbert, a former competitive bodybuilder, began by curling buckets of sand before graduating to dumbbells and barbells. As he says in his own words, training was very primitive back then. And yet, he still built 21 in arms.

Your training volume needs to be proportional to your upper arm development.

He notes that you need to work your arms intelligently (not just intensely) if you want them to grow.

For example, he says that a beginner simply doesn't have the recovery capacity or muscle mass to grow from more than a few sets per exercise per workout. However, he notes that as you get more advanced, your arms can grow faster from doing more volume, a theory that has since been provided multiple times by modern science. [2]

When Leroy was in the trenches building his biceps and triceps, there was no internet with articles like this. He was obsessed with growing his arms and didn't set arbitrary limits on his progress like a lot of lifters tend to do today. So if you want to get 21" biceps or a similar measurement, you need plenty of self-belief and a desire to train consistently.

At a height of 6'3", Mike O'Hearn has a much bigger frame than the average bodybuilder. With 21 inch biceps, he's an excellent example of how years of dedicated training pays off in arm gains.

Mike shows that you need to have extremely strong arms if you want to join the 21 inch club. It's no good lifting the same weight for weeks and months on end if you want to grow your arms.

Muscle maintenance, of course, is a different story. But what fun is maintenance?

Mike O'Hearn's workouts always consist of high volume and multiple exercises for the same body part. Now, you or I might not be able to handle this much volume, but it just goes to show that you have to perform abnormal amounts of work if you want abnormally jacked arms.

On a not unrelated note, Mike O'Hearn is well-known for his early, 4 AM workouts, which clearly shows that he's extremely dedicated to the pursuit of sculpting a muscular, aesthetic physique.

Building a 21 inch arm circumference takes more than hard work and dedication for the average natural lifter. So make sure to follow these size-gaining tips if you want to get 21" biceps and beyond.

Experiment with your arm training frequency

How do you know the most optimal training frequency for your arms unless you try different frequencies?

Sure, you can and should use science to make reasonable resistance training conclusions, but getting real-life experience in the weight room is the best way to find what works for you.

Some people built their 21 in biceps by blasting their arms once per week.

Others did two weekly sessions to split up the volume.

Others still trained their arms every other day or even on a daily basis until they got to a satisfactory size.

The point is that when you're in pursuit of an arm size that 99% of lifters don't and will never have, you've got to try different training frequencies to see how your body responds.

When you find a frequency that enables you to perform quality sets each and every workout while getting good recovery, you know that you've hit the jackpot.

Bring up your weak points

Even if your arms are already big, you obviously have some muscles (or heads of muscles) that are more developed than others.

For example, many lifters have a well-developed triceps lateral head from years of pressing and pushdowns.

However, it's the long head that contributes the most mass to your overall arm circumference. Anyone with big arms always has a well-developed long head, something that's achieved by performing overhead extensions and skull crushers.

On the other hand, all of that heavy pressing and overhead work may well have earned you titanic triceps already.

So if your biceps are legging, then make sure to prioritize them by training your bis first in the workout, with multiple rep ranges, and from a variety of angles.

Bulk up to a higher body fat

I won't sugar coat it; if you want to develop 21 inch biceps naturally, then you're probably going to have to wave goodbye to your six-pack (and indeed a lot of your arm definition).

The question is, do you actually want to build 21 inch arms?

After all, your arms might actually look smaller if you get to 20% or 25% body fat in order to get 21 in arms. Being a successful bodybuilder requires plenty of muscle mass, yes. But it also requires an ability to pose your physique to make it look bigger than it actually is.

So a lot of those bodybuilders who you think have 21 inch arms may not actually have as much mass as first meets the eye.

Having arms that big is also problematic if you're short because you'll have to wear clothes that are way too big for the rest of your body!

Whether or not pumped 21" or 21.5 inch arms are legit is up to you. Personally, though, if someone has 21 in biceps with a pump without being obese, then they clearly have a considerable amount of muscle mass.

If you've read our other size guides (linked at the start of this article), then you'll notice that the bigger the measurement gets, the more people start measuring their arms in a pumped state.

So if you already have plenty of mass and just want to budge the tape measure to 21 inches, it could be worth performing a pump workout to temporarily inflate your measurement (you can expect to gain around an inch with a good pump).

Conclusion: Is it possible to build 21 inch biceps?

As Leroy Colbert, John Meadows, and Mike O'Hearn have proven, building 21 inch biceps is possible if you train for years and, more likely, for decades.

As for building 21 inch arms naturally, it's close to impossible unless you have a big frame or are willing to bulk up to a high body fat level.

But that doesn't mean that you can't try. If you focus on the task in front of you—your next arm session, your next meal—then you might just join the 21 inch club and, if not, at least come close.