Are 20 inch biceps big? Learn how to get 20 inch arms naturally (it's possible)

Learn what it really takes to get 20 inch biceps as a natural lifter. 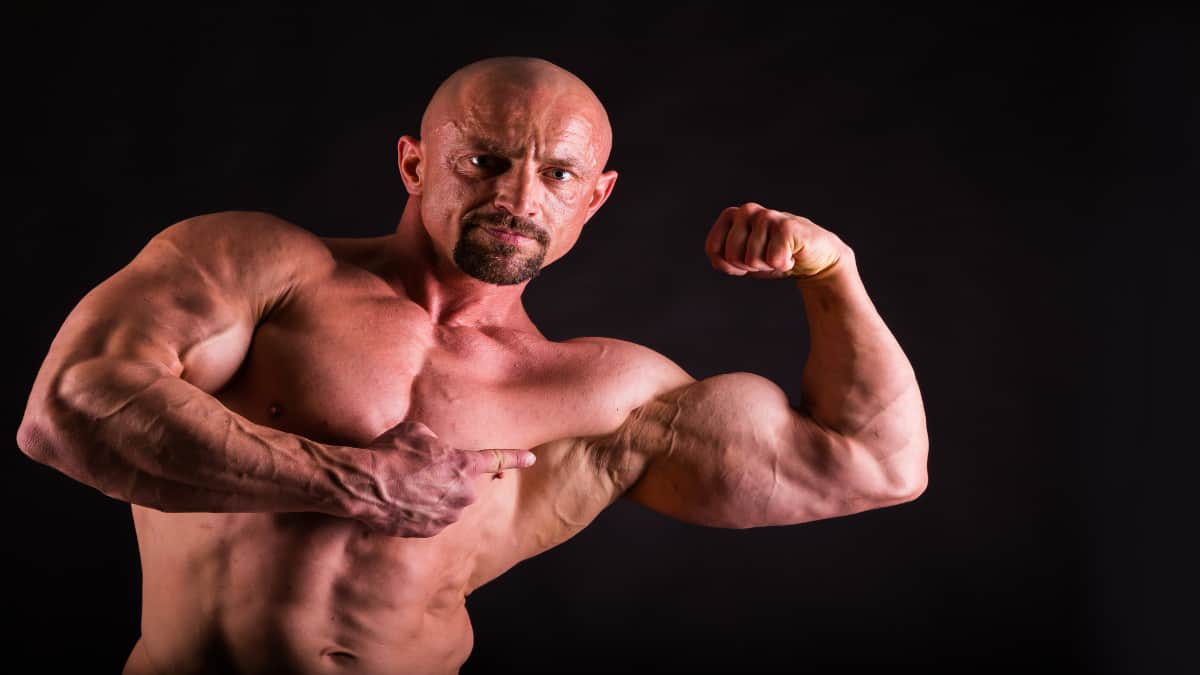 If you've got 20 inch biceps—pumped or cold—then your arms are well above the average male bicep size, which is around 7 inches less.

In addition to showing you how to get 20 inch arms naturally (it is possible for some lifters who have good genetics), this biceps muscle guide also makes use of real-life case studies to see how other people built their 20" arms.

See How You Compare:

How big are 20 inch biceps?

How big are 20 inch biceps for a natural lifter?

If you've got genuine 20 inch arms as a natural lifter—pumped or cold—then your biceps are well and truly massive. Considering that the average man has biceps that are only 13 inches, 20" biceps are what genetically-blessed natural lifters can hope to achieve as a maximum bicep size.

As for how impressive your 20 in biceps are, that depends on your height, frame size, body fat percentage, and measurement state.

If you're 6'9" and 35% body fat, then your 20 inch arms will likely look fat and perhaps even smaller than they actually are.

On the other hand, if you're of a typical height or even just a bit taller than average and you have a lower body fat percentage (15-20%), then 20 inch biceps will look big and aesthetic on your physique.

Can you build 20 inch arms naturally?

Yes, it's theoretically possible for a natural lifter to build 20 inch biceps if they're genetically blessed in at least one of the following areas.

Building natural 20 in arms is possible if you're tall and have a substantial frame. For example, if you're 6'6" or taller, then you're naturally going to have longer arm bones than 99% of the population.

Longer arm bones have a higher capacity to accumulate muscle tissue than shorter bones; hence why tall lifters typically have a bigger overall arm size than shorter lifters, even if their arms don't necessarily look as big or impressive). [1]

Lifters with a larger bone structure will have an easier time building 20" biceps.

If you're not really tall but still have a solid frame (let's say broad shoulders, big wrists, and 6 ft plus), then you might still be able to get 20" biceps if you have amazing muscle-building genetics.

Now, if you have neither the height nor the bodybuilder genetics, then you might—with a lot of pumping up and patience—be able to get 20" arms if you increase your body fat level above 20%.

However, building 20 in biceps while gaining too much body fat might have the opposite effect; it could actually make your arms look smaller than 20 inches. So if you care about aesthetics, don't sacrifice too much muscle definition in pursuit of an arbitrary arm size goal.

Can women get 20 in biceps?

In general, no, women can't get 20 inch biceps (51 cm biceps) unless they're obese or are a large-framed professional female bodybuilder. I've certainly never seen a pair of lean, verified 20 inch female biceps.

Anyway, in the first instance, women who are obese and thus have excessive amounts of body fat may well register a 20 inch arm circumference measurement. [2]

In the second example, a pro female bodybuilder might look like she has 20 inch arms (51 cm arms) because of her posing ability and low body fat level.

However, even in the professional ranks, it's doubtful that there are any women with 20" biceps because smaller frame sizes, which have a reduced capacity to hold muscle mass, are more conducive to professional bodybuilding than taller, well-built frames.

Love him or hate him, Vegan Gains has some of the biggest arms on YouTube (and indeed ever verified by tape measure). At a colossal 20 inches, his arms have more mass than those of many fake naturals.

At the height of 6'3" with a solid frame, Vegan Gains definitely has plenty of bone mass to store all of that lean tissue. He's an excellent example of what taller natural lifters can hope to look like at a higher body fat percentage.

Of course, his arms are far from being shredded (as are most people’s). But many lifters of an equivalent build and body fat level have way smaller arms than him, so it just goes to show that it's possible to build 20 in arms if you gain weight, increase your strength, and train consistently over a number of years.

You could visit 100 different gyms and still not see a pair of arms as muscular as Devin Bernardo's.

While some people don't believe that his arms are genuinely 20 inches, they certainly don't look far off the mark.

From what I can see, his arms—although much leaner—look similarly-sized to those of Vegan Gains, who, if you recall, actually verified his arm size with a tape measure.

Second, Devin is, by his own admission, blessed with good arm genetics.

Also, his training style for arms is high-volume. Although he used to blast his bis and tris on a weekly basis, he trains his arms less frequently nowadays because they're already so big.

So if you want to make your arms bigger (not necessarily 20 inches), you're going to have to be prepared to put in some serious gym time.

Natural Classic Physique World Champion Logan Foote is 6'1" and has lean 20 inch biceps with a pump.

His arms are the absolute pinnacle of what a dedicated, genetically-gifted natural lifter can hope to achieve.

When it comes to getting 20 in arms, being tall helps tremendously because tall lifters have longer arm bones. As mentioned, when you have long arm bones, you're naturally capable of building more total bicep and tricep mass than someone with short arm bones.

Like Devin Bernardo's workouts, Logan Foote's training sessions are intense and consist of plenty of training volume (12+ sets for bis and the same for tris).

High-volume arm training is a common theme among those with 20" biceps. You certainly don't get monstrous arms by playing it safe with a few weekly sets; you need to train exceptionally hard and perhaps even flirt with overtraining at times if you want to get extraordinarily big arms.

Learn how to get 20 inch arms naturally by making the most of your genetics and focusing on proven bodybuilding fundamentals.

Have the right genetics

Let's make one thing very clear; you need some kind of genetic advantage if you want to build aesthetic 20 in biceps as a natural lifter.

Being tall with a huge frame is the obvious example because tall lifters have longer bones and longer bones, as we established, give you a more muscular genetic potential.

Simply being blessed with an uncommon ability to add mass rapidly and fill out your frame is another way that you can get 20" arms as a natural lifter. Of course, people with top-tier mass-building genetics are, by definition, a rarity.

For the rest of us who aren't exceptionally tall and who don't have the genetics to become a future Mr. Olympia, we need to train smarter, harder, and make the best use of our other attributes.

In this regard, having 20 in arms can actually be more of a curse than a blessing.

On the one hand, if you have lean 20 in arms, then people will say that you're not natural.

On the other hand, if you have 20 in biceps with more than 20% body fat, then people will call you fat and chubby even though there are plenty of non-lifters who have 20 in arms due to obesity.

That said, increasing your body fat is obviously the best and fastest way to build twenty inch arms.

Sure, your biceps might not look rock-solid at 25% body fat, but it proves the point; natural lifters can get 20 inch biceps if they're willing to sacrifice some (or a lot) of their muscle definition.

Focus on the right muscles

While all of the muscles in your biceps and triceps need to be trained hard in order to grow, building abnormally large arms requires an abnormally smart approach to training.

The two areas that you need to focus on the most are the long head of the triceps and your bicep peak.

The long (inner) head of your triceps is bigger than the lateral and medial heads combined and, when well-developed, accounts for around 40-45% of your overall arm mass (not just that of your triceps).

The biceps are very important (especially the peak). But as the triceps make up two-thirds of your arm, they deserve more attention.

So make sure to do plenty of overhead extensions and skull crushers if you want to build 20 or 20.5 inch arms.

Sculpting a prominent bicep peak will make your biceps taller and therefore budge the tape measure further. Since the biceps are undeniably smaller than the triceps, the elusive peak is often overlooked in favor of the triceps, which is to say neglected.

Of course, the shape of your biceps is largely genetically determined. However, you can still build a better peak by bringing up the long (outer) head of your biceps and developing your brachialis, which helps to push the biceps out.

If you're still curling the same weight that you were 6 months ago, then it's unlikely that your arms will have grown unless you've gained a significant amount of body fat.

Progressive overload is one of the most basic and effective strength training principles, [3] and yet, so many lifters focus on superfluous training tactics instead.

Yes, supersets, drop sets and cheat reps can work. However, none of those intensity techniques produce results unless you're lifting a respectable amount of resistance.

So if you truly want to build 20 or 20.5 inch biceps, then make sure to stick with a few core exercises that you aim to progressively overload on a weekly, bi-weekly, or monthly basis.

After you’ve done chins, presses, curls, and extensions, you can do some lighter pump-work for higher reps to ensure that you're giving your slow-twitch muscle fibers a good workout as well.

Although there's no secret "20 inch arms workout routine" that you can buy or follow, there are certain principles that you can follow in order to increase your chance of joining the 20 inch club.

We mentioned progressive overload already, but you also need to be training close to failure so that you recruit as many muscle fibers as possible.

Here's a sample 20 inch bicep workout that you can follow:

The verdict: Can you build 20" arms through diet and training alone?

But you shouldn't be too disheartened. After all, getting 20" biceps is a completely arbitrary training goal; you can still have great-looking arms while registering a circumference measurement that's much smaller than 20 inches.

So rather than fixating on a particular end goal, try setting smaller, more attainable short-term goals and working towards them instead. You never know, if you measure your arms pumped one bulking season, they might just creep up to 21 inches!