Who has 25 inch arms? Learn how these bodybuilders built their 25 inch biceps

Find out what it takes to build 25 inch biceps. 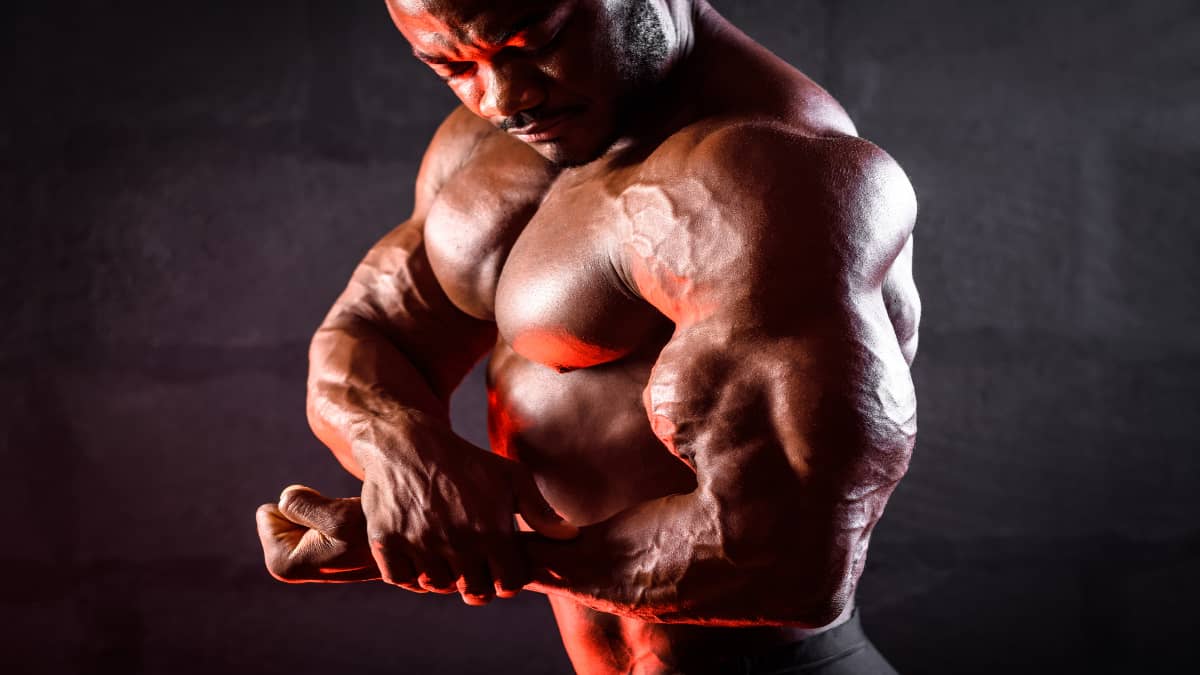 Your biceps brachii muscles and your triceps add up to a lot of muscle mass when you've been training for years. This is especially true for the triceps because they account for around two-thirds of your total upper arm mass.

Yet, even with the best diet and training program in the world, building a 25 inch bicep circumference is highly unlikely for the vast majority of lifters.

But that doesn't mean that developing 25 inch arms is impossible.

In fact, there are multiple bodybuilders who have in excess of 25 inch biceps. This guide is going to shed some light on exactly how they achieved such a colossal arm measurement.

Table of Contents show
How can you get 25 inch arms?
Does anyone actually have 25 inch biceps?
Dave Crosland
Shaun Royer
Manfred Hoeberl
In conclusion

Getting 25 inch arms naturally is close to impossible because that would mean that your arms (a relatively small body part) are larger than most men's quadriceps and hamstrings—two of the biggest muscles in the human body.

But let's say that you're genetically gifted. Is it possible to build 25" biceps with the right genes?

It's well-documented in the scientific literature that frame size is positively correlated with lean mass. [1] So if you're really tall with a sturdy frame, then you naturally have an enhanced capacity to store muscle mass because your bones are so long.

Now, let's say that someone 7 ft tall bulked up to 25% or 30% body fat after years of building up their biceps and triceps. Would they have 25" arms then?

It's hard to say because there aren't many people that size who do bodybuilding training. But in theory, it may be just about possible for a natural lifter to get 25 in arms if they tick all the boxes; giant bone structure, outstanding mass-build genetics, high body fat level.

Does anyone actually have 25 inch biceps?

Believe it or not, there are people out there with real 25 in biceps. This section explains the kind of training and routine that each 25-incher had to go through in order to build their pythons.

Dave Crosland stands 6'1" and has verified 25 inch arms. [2] He also has plenty to say about building the biceps and triceps on his YouTube channel UCTheFREAK.

Some people might be forgiven for thinking that "meatheads" don't really understand exercise science and muscle physiology, but Dave Crosland certainly does.

He notes that if you can't contract your triceps at the bottom of a curl, then you're not using a full range of motion. This is because when the triceps are contracted, the biceps are, by definition, fully lengthened and under a growth-stimulating stretch.

Similarly, Dave says that you should always begin your curls with a supinated grip so that you can keep the tension on your biceps, which, after all, act on the forearms as well as the elbow joint.

You might not have heard the name Shaun Royer, but when you see the size of his arms (a massive 25 inches), you certainly won't forget his name in a hurry either.

Shaun Royer stands 6'1" and weighs over 350 lbs, which gives you some idea of the body mass that's required to maintain such a colossal arm size.

All this for a guy who doesn't make his living in the fitness industry and who didn't start training seriously until his 30s.

Shaun works with actors and singers to help them achieve their goals; he certainly doesn't compete in bodybuilding and yet has bigger arms than 99% of pros! Incredible!

Former powerlifter and strongman Manfred Hoeberl was the first man to ever have 25 inch arms.

This might seem hard to believe, considering that strength athletes are typically bigger nowadays than they were in the 1990s when Manfred was competing. However, as you can see in the video, Manfred's arms look every inch of 25 inches.

Specifically, it's reported that his arms were measured at 25.75 inches, which is considerably bigger than the thighs of most lean natural bodybuilders.

For most of us natural lifters, the goal of building head-turning 25 inch arms is nothing but a pipe dream. After all, most large-framed professional bodybuilders don't even have 25 inch biceps!

The good news is that you can make your arms look massive without building them to 25 inches. As any successful bodybuilder will tell you, part of looking huge is being able to pose your physique and make use of angles to accentuate your muscles.

Of course, if you really are a 7 ft giant, then perhaps you can build 25" arms. But for the rest of us, it's not going to happen.