Learn how alternating skull crushers enable you to get more reps on every set. 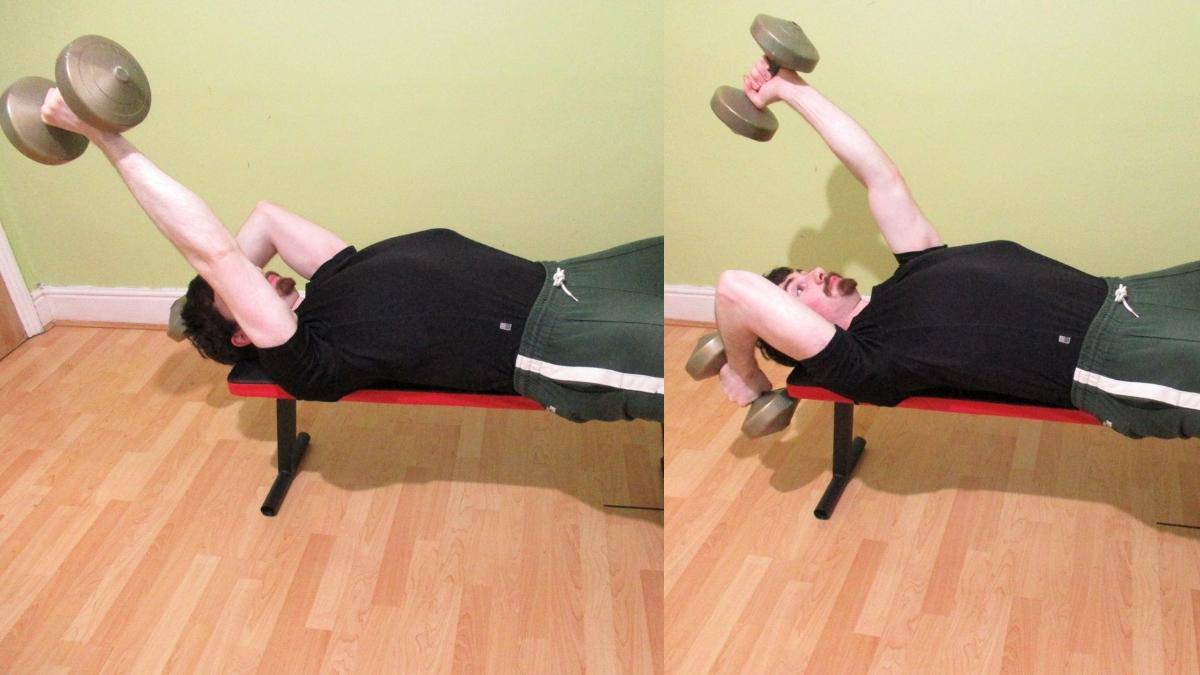 Performing a skull crushers workout is one of the best activities that you can do for your triceps because skull crushers train the long head of the triceps, which is by far the biggest and most prominent of the three tricep heads.

This guide shows you how to perform skull crushers with dumbbells in an alternating fashion. We'll then discuss the benefits of the exercise and explain how it differs from non-alternating skull crushers so that you can decide which variation is best for you.

How to perform alternating skull crushers

The first and most significant benefit of alternating dumbbell skull crushers is that they enable you to achieve more reps per set. This is because each of your triceps gets a brief rest while the opposite arm is working; thus, your triceps will be fresher by the time their next rep rolls around.

Like reverse skull crushers and wide grip skull crushers, alternate skull crushers also train all three heads of the triceps while giving extra emphasis to the long head, which, as mentioned, is by far the biggest head. So if you want to gain maximum triceps mass, alternating skullcrushers are an excellent exercise because they really stretch the long head while enabling you to smash out extra reps on each set.

Since you have to perform alternating skull crushers with isolateral training implements (like dumbbells or kettlebells), the movement is also remarkably effective for developing symmetrical triceps. So if you want to minimize tricep size asymmetries, make sure to do alternate skull crushers because they really let you hone in on each tricep to make sure that both sides are receiving similar amounts of work.

Alternating skull crushers are wrist-friendly because they allow you to lift with a neutral grip. They also promote symmetrical triceps development.

Similarly, because you have to do the alternate dumbbell skull crusher with a neutral grip, it's a very wrist-friendly exercise because, unlike the dumbbell twist skull crusher, the alternating version doesn't involve any pronation (repeatedly pronating your wrists with weight can hurt your joints).

Additionally, if you’re performing alternating skull crushers with the recommended shoulder movement (the long head, after all, performs shoulder extension), then the exercise is also very easy on the elbows.

Besides alternating dumbbell skull crushers, there are four other variations of the alternate skullcrusher that you can perform to build your triceps.

Performing skull crushers with kettlebells in an alternating fashion offers all the benefits of the dumbbell version—the ability to hone in on each tricep, a reduced chance of developing muscular imbalances, increased work capacity (i.e., more reps per set).

The difference is that you have to perform the kettlebell version with a pronated grip, which may put more pressure on your wrists. As such, you're best off sticking to high reps on alternating kettlebell skull crushers so that you don't place too much stress on your joints.

Kettlebells also tend to increase in wider increments than dumbbells. So, past a certain point, the movement isn't ideal for gaining strength as quickly as possible because it’s unrealistic to make big weight jumps regularly on an isolation exercise. Nonetheless, kettlebell alternating skull crushers are still a great, convenient accessory lift that you can use to train your triceps with more volume.

Performing skull crushers with cables really pumps up your triceps because cables challenge your muscles with constant tension.

You can do alternating cable skull crushers by placing a bench in the middle of a compact cable station, lying on the bench, and then, after removing any attachments, grabbing each side of the cable with your opposite arm (I.e., hold the left cable with your right arm). From there, with the cables positioned over your forehead and your elbows flared out, you simply extend your elbows back and forth like you would do during standard skull crushers.

Since this is a cable-based exercise, it's naturally very joint-friendly compared to free-weight skull crushers because the resistance is smoother, and the movement requires less stabilization.

The only downside is that the setup can be a little tricky to accomplish in a busy gym because you'll need to wheel a bench to a cable station and then use both sides of the machine.

You won't see too many people doing the alternating weight plate skull crusher.

But that doesn't mean that plate skull crushers are a bad exercise.

After all, your triceps certainly can't tell whether you're lifting barbells, plates, rocks, or stones; they just respond to tension.

So if you don't have access to the usual free weights but still have some discs laying around, then plate alternating skull crushers are a convenient and effective exercise for training your triceps.

Just be sure to use plates that are easy to grip—you don't want to drop the weight discs and turn this exercise into a literal skull crusher!

Doing a skull crusher with resistance bands is incredibly convenient because you don't need any free weights.

All you need is a light resistance band a secure anchor point.

A bench is recommended, but you can do them lying on the floor if it's easier.

Essentially, you want to anchor your band, lie on the bench, and then grip each band handle with a pronated grip. From there, you just lower the handles behind your head to stretch your triceps and then extend your elbows to complete the rep.

Bands become heavier the more that you stretch them, so they don’t usually provide much resistance during the first few inches of movement.

However, by moving a couple of feet away from the anchor point, you can get tension from the very first millimeter of movement because the bands will already be stretched and thus able to tax your triceps with plenty of resistance.

Alternating skull crushers are virtually identical to the standard version. The only difference is that you'll be able to achieve more reps per set with the alternate version because your triceps get a short rest after performing each of their repetitions.

The minor trade-off is that it's harder to keep track of your reps when you're doing alternating exercises. Your best bet is to count total reps rather than reps for each arm, in which case you'll want to perform 20-40 total repetitions on each set.