How to do plate skull crushers for your triceps

Here are 5 pros and cons of plate skull crushers that you might not have considered. 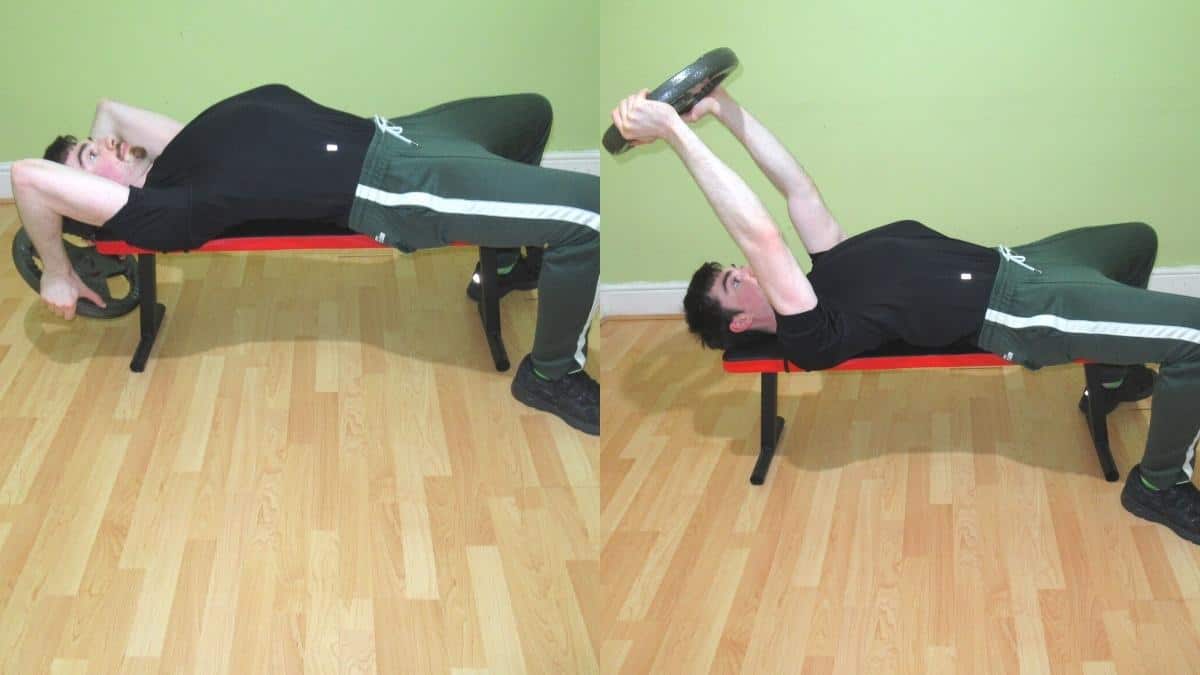 No serious strength coach or weight lifter can deny the effectiveness of the EZ bar skull crusher. It's practically built for progressive overload, and using an easy curl bar takes much of the pressure off your wrists, allowing you to give full attention to your triceps.

Yet, if you're working with minimal equipment, then exercises like BB skull crushers aren't always possible to perform.

Or perhaps you're just looking for a convenient way to train your triceps? A movement to finish off the remaining muscle fibers after a hard and heavy workout?

In either case, plate skull crushers are a great exercise because the movement is remarkably accessible (all you need is a weight plate) and deceptively effective for training the triceps.

How to do a skull crusher with a plate

Plate skullcrushers are a brilliant exercise for training all three heads of the triceps when you use the proper form. However, there are also a few downsides to the movement that you need to take into account before doing any kind of tricep extension with a plate.

Pro: Great for the long head

Like the kettlebell lying skull crusher, plate skull crushers work all three tricep heads and give extra emphasis to the long head.

Since the long head of the triceps performs shoulder extension as well as elbow extension, skull crushers are naturally one of the best movements for building triceps mass because, when performed optimally, they allow plenty of shoulder movement to stretch the long head.

So rather than lowering the plate to your forehead, which is actually quite dangerous for multiple reasons (more on that later), you want to lower the weight disc behind your head to maximize recruitment of the long head of the triceps.

All you need is a weight disc.

If you don't have a bench, then you can do a plate skull crusher on the floor instead.

The point is that you don't have to waste time or energy loading plates onto a barbell with the plate skullcrusher; you just grab a weight disc and start lifting.

As such, performing skullcrushers with a plate is ideal for training your triceps at home because you don't need any fancy or expensive equipment.

Similarly, because you'll be holding the weight plate by its sides, you're wrists will automatically be in a joint-friendly neutral position. This is a setup that isn't possible to achieve when you do a skull crusher on the Smith machine, for example, because many exercises force your wrists into exaggerated pronation and put extra pressure on your joints as a result.

Weight plates typically increase in 5 lb and 10 lb increments, both of which are big weight increases to make for an isolation exercise like skull crushers.

The solution, you would think, would be to hold a bunch of small plates in your hands to make the weight jumps more manageable.

And you can certainly do this to reduce to increments to around 2.5 lbs.

That's why I like to reserve plate skullcrushers for finishing off my triceps.

Yet, they're undeniably effective for high rep training because they require much less setup than other types of free weight skull crushers; if one weight disc feels too heavy, you simply grab a light one instead; no complicated weight change is needed.

Con: Potentially unsafe for some people

Most people can perform plate skull crushers pain-free if they use the proper form.

However, some lifters may experience elbow pain when doing skull crushers with a plate and other types of free weights.

The way around this elbow discomfort is to 1) lower the weight plate behind your head rather than to your forehead and 2) stick to high reps (12-25) so that you don’t put too much torque through your elbow joints.

Dropping the weight plates is another potential danger to watch out for and something which is more likely to happen when you try to hold multiple weights discs in your hands.

Unlike with a barbell, you can't wrap your fingers around a weight plate (unless you do the other variation shown below). Therefore, if you lose control of the weight, then it may actually fall on your face and cause you a severe injury.

So as effective as plate skullcrushers are for building muscle, they're not the safest skull crusher variation—not by a long shot.

The isolateral plate skull crusher is similar to the alternate dumbbell skull crusher in that it has you work both arms independently (but not in an alternating fashion).

This makes the exercise particularly effective for preventing and reducing tricep size asymmetries because your stronger tricep can't compensate for your weaker tricep when each arm has to hold its own weight plate.

Additionally, this two-arm plate skull crusher is safer than the normal variation—if you have tri-grip plates—because you can wrap your fingers and thumbs around the weight discs themselves. In other words, you're not merely holding the plate by its sides—the edges of the plates are actually in the palms of your hands.

The slight catch, as mentioned, is that you need weight discs that have holes on the side in order to make this exercise work.

Since skull crushers place a lot of tension on your elbows—a reality that you can reduce but one that you can't avoid completely—your best bet is to stick to high reps to minimize the torque going through your elbows.

Train your triceps twice a week if you're in pursuit of maximum muscle hypertrophy.

Most people shouldn't train their triceps (especially not with plate skull crushers and the like) more than twice per week because connective tissue structures like ligaments and tendons take a lot longer to recover than muscle tissue.

This is particularly applicable to the elbow joint, which is an area that many lifters struggle with in terms of injuries.

Performing skullcrushers with a plate is highly convenient and really works your triceps well because the exercise hits all three heads while giving particular emphasis to the critical long head.

For best results, though, don't make plate skull crushers your primary tricep exercise because they’re not ideal to load up on. As we discussed earlier, holding multiple weight discs in your hands (directly above your head!) when your fingers and thumbs aren't securely wrapped around them is a bad idea.

So, by all means, perform plate skull crushers to finish off your triceps at the end of a workout, but don't push things too far by lifting excessively heavy weights.