How to do single arm skull crushers with just one dumbbell

Fix your tricep size asymmetries with one arm skull crushers. 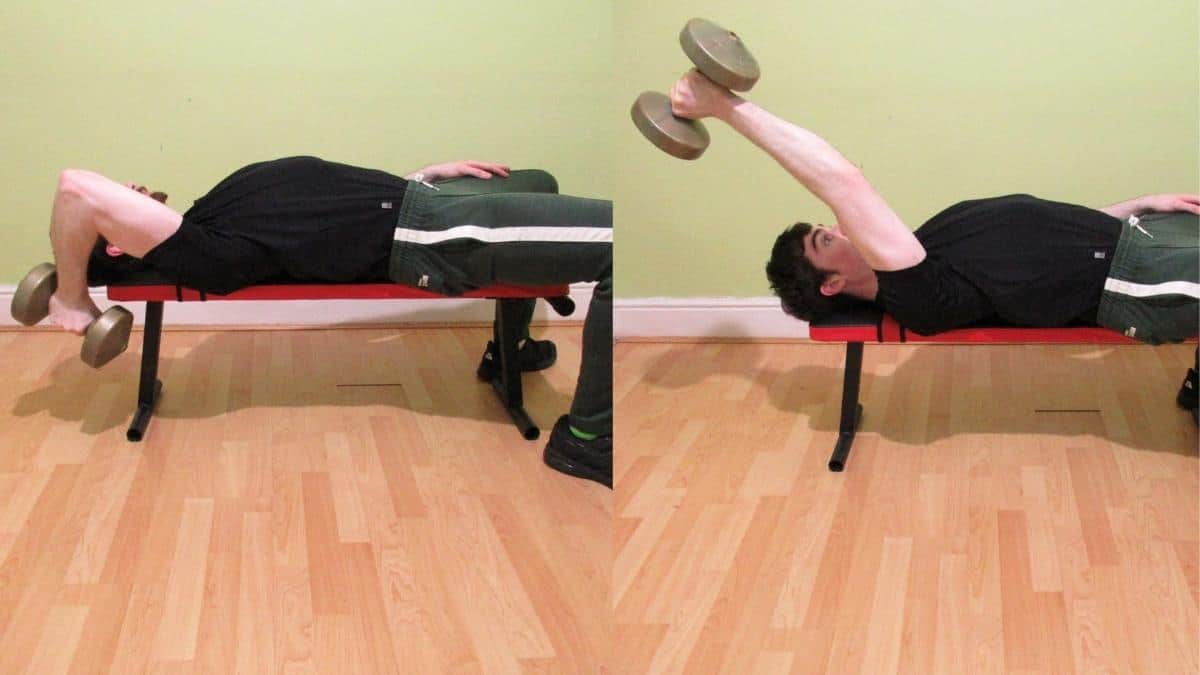 One arm skull crushers are an excellent exercise for building triceps that are symmetrical as well as big and muscular. This is because, with single dumbbell skull crushers, you have to train each arm separately.

As such, you can give maximum attention to each of your triceps and ensure that both muscles are receiving a similar amount of work and thus growing more or less in proportion.

This article explains how to do skull crushers one arm at a time and also demonstrates an additional six variations of the single arm skull crusher that you can do to tax and train your triceps.

How to do one arm skull crushers

The single arm DB skull crusher (aka the single arm dumbbell lying tricep extension) is the ideal exercise for avoiding tricep size asymmetries because it forces you to train each arm separately, which is to say in a unilateral fashion. This enables you to dedicate 100% of your attention to each of your triceps and ensure that both muscles are getting similar amounts of stimulation.

Similarly, single DB skull crushers are useful for establishing a stronger triceps mind-muscle because you only have to focus on lifting one weight at a time. Therefore, you can focus on stretching and squeezing each of your triceps to the best of your ability to make sure that your muscles are receiving the best possible hypertrophy stimulus.

In addition to training all 3 heads of the triceps, DB skull crushers improve your mind-muscle connection and enhance your upper arm symmetry.

The single dumbbell skull crusher is also a highly accessible exercise that you can do just about anywhere. All you need is one dumbbell and a spare five or ten minutes, which is ideal if you can't get to a gym but still want to blast your triceps (as you'll learn later, you don't even need a bench to benefit from single arm skull crushers).

The downside of one arm skull crushers is that your sets will take twice as long to get through. This extra gym time is likely worth the benefit of having better triceps symmetry. But if you're pressed for time, then you can just do an alternate dumbbell skull crusher instead and get similar results.

Performing one arm kettlebell skull crushers is a convenient and effective way to build your triceps.

All you need is a single kettlebell and a comfortable place to lie down.

The execution is exactly the same as it is for the dumbbell version; the difference is that you'll be holding the kettlebell with a pronated grip rather than with a neutral grip. This overhand grip may put more pressure on your wrists than the standard one arm skull crusher.

However, considering that, in all likelihood, you'll be lifting relatively light on this isolation exercise, the pronated wrist position won't bother the majority of people.

Just make sure to lower the weight behind your forehead so that you can a) reduce the torque going through your elbow joint and b) give the all-important long head of your triceps a more substantial eccentric stretch.

Unlike free-weight single arm skull crushers, the cable version taxes your triceps with constant tension because you can't rest at any point during the set.

This consistent resistance naturally results in a powerful muscle pump that will help you to forge a formidable mind-muscle connection with your triceps, one that will carry over to your other exercises, too.

You can perform one arm cable skull crushers with a single rope, cable handle, or without any attachments at all.

The latter, attachment-free version is my preferred option because the pulley system will produce plenty of force from the very first inch of movement when there's no rope attached to the cable.

One arm banded skull crushers are similar to their cable counterpart because they too provide constant tension (at least when the band is actually stretched).

The catch is that although bands do provide constant tension, they don't offer consistent resistance.

Hence, the end of the rep—where the band is more stretched and exerting a stronger force on your triceps—is more challenging than the start of the rep when there's only minimal tension and kinetic energy within the band.

You can improve the exercise by moving further away from the anchor point. This way, the band will already be stretched when you begin the rep and will thus able to exert force on your triceps from the get-go.

Doing a one arm skull crusher with a plate is highly convenient (and highly effective) if you don't have access to traditional kinds of free weights like dumbbells and barbells.

After all, can your triceps really tell whether you're lifting a weight plate or a barbell?

Of course they can't!

Your triceps are just pieces of meat that respond to the tension you put them under. So, yes, you can absolutely build titanic triceps with weight plate single arm skullcrushers.

The only downside of using plates is that weight discs often have relatively large increments. So unless you want to hold multiple weights discs in your hands (not a smart idea on skull crushers, because you could drop the weights on your head), you're going to find it hard to gain strength on a regular basis.

Don't have a weight bench to do unilateral skull crushers?

No problem, you can perform the exercise just fine on the floor (though using an exercise mat will make the movement a bit more comfortable).

In a sense, performing one arm dumbbell skull crushers on the floor is actually better than doing them on the bench because you can standardize your range of motion by touching the weight to the ground on every rep. This ensures that you're gaining strength rather than just reducing your range of motion in order to ego lift with heavier weights.

On the other side of the coin, you could argue that doing single arm skull crushers on the floor is worse for triceps hypertrophy because the weights could hit the ground before you achieve a complete triceps stretch. This, of course, depends on the length of your arms. The weights hitting the floor isn't necessarily a bad thing providing that your triceps receive ample stimulation during the set.

Performing one arm reverse skull crushers can help you to prevent your elbows from flaring excessively.

The trade-off is that the exercise is quite dangerous—unless you use straps or Versa Gripps—because you could drop the dumbbell on your face (not something to take lightly!).

You also need to consider that holding the dumbbell with an underhand grip could reduce your range of motion because the sides of the weight might make contact with your head before you get a proper stretch.

When you perform single arm skull crushers with the recommended neutral grip, on the other hand, the weight breezes past your face without any danger and enables you to put the long head of your triceps under more tension by accentuating the eccentric stretch.

Conclusion: Should you include one arm skull crushers in your routine?

If you want to minimize your chance of developing tricep muscular imbalances, then including one arm skull crushers in your routine is an excellent idea.

Building more proportional triceps with single arm skull crushers will improve your compound lift performance (think bench press and overhead press) because, by training your triceps separately, you'll be able to push the bar more evenly during your multi-joint exercises since your stronger arm won’t dominate the movement as much.

Your best bet when performing a single arm skull crusher is to start with your weakest arm. This way, you'll be prioritizing the reduction of your muscular imbalances rather than just working on them as an afterthought.